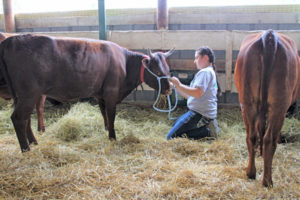 Cristy Updike of Interlaken is on a mission to keep her children close to agriculture. With cows leased from Every Season Farms in Seneca Falls, the Updike children did well at the recent Seneca County Fair. Her children have been involved in 4-H for years, and this year, their group showed 21 cattle and 16 sheep. They also keep a few chickens at their home but did not show them.

“It was pretty fun,” said Sawyer Updike, 14. “I enjoy it.” He took home the ribbon for grand champion market beef steer.

This year, he learned about improving the fit of his animal’s halter. “Be confident about it,” Sawyer advised other children showing. “Working with the animal for a few months helps.”

“It went pretty well at the show,” she said. “I had the most fun at the beef show.”

Like her brother, she advised working with the animal in advance about the show. “If you’re not sure about something, ask someone who has experience at showing,” she said. “I was showing beef for the first time, so I learned how to use the show stick and set up their feet. I learned you walk forwards with beef cattle.” She plans to show again.

“Participating in 4-H builds their self-confidence and self-esteem,” Cristy Updike said. “They’ve made some great friends throughout the program. It doesn’t matter whose animal it is, they all pitch in. It’s a great group of kids.”

Six families are involved in their club. Some, like the Updikes, lease their animals.

“It’s a little crazy to commute, especially those final weeks before the fair when we’re going every other day to the farm,” Cristy said.

The Updikes live a half-hour drive from the farm. While that makes for busy days, “it’s well worth it in the end,” she said.

Her oldest child, Tanner, 16, is working full-time this summer, preventing him from showing. However, whenever he was available, he pitched in to help his siblings.

Cristy was raised on a beef and crop farm and understands the value of having children work with animals. This year was a little more work than others, as the family had only two months to prepare their animals since it was not until May that they could confirm the Seneca County Fair would happen. 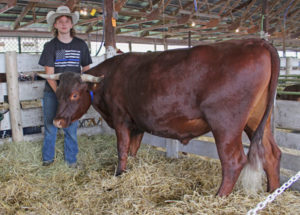 “The animals did pretty well,” she said. “Everyone pulled together. There was talk about the fair and they weren’t sure because of the pandemic. We had a couple families who typically show with us who decided not to because it was short notice.”

She said attendance for the fair picked up because after a year of COVID-19 shutdowns, “people were ready to get out. On Saturday, we had a steady flow of traffic. The dairy show was Friday afternoon after work, which I think helped.”

So many people attended that some vendors ran out of cold drinks by Saturday evening. Cristy saw this as a good sign.

“I think it’s very important that we have county fairs and have the animals there, so people are aware of agriculture in Seneca County,” she said. “I think people need to know where their food comes from. So many think it comes from a grocery store shelf.”

While at Seneca County Fair, she heard some fairgoers complain about the small number of animals present; however, the time it takes to prepare animals and the recovery from COVID-19 concerns both contributed to the lower number of filled stalls.

Another reasons that so few competed in the fair is the small number of local farm families interested in exhibiting.

“If more people would come and show, we’d have more competition,” she said. “There is only one non-Mennonite and non-Amish dairy in Seneca County. It would be great to build our fair.”

She had to take vacation time from work so she could accompany her children to the fair.

“I do it because it’s so important for these kids,” Cristy said. “My daughter, when she gets into the show ring, pulled it together, made eye contact and answered questions. It’s a huge confidence booster and I’ll use my vacation time to do that.”

“It’s very important to have hands-on learning,” Cristy said. “For kids who don’t live on farms, it opens their eyes, so they know where their food comes from. If we can promote that, we’ll jump in and do that.”

As she drove her children home at the end of the four-day fair, they were already making plans for their 2022 showing.

“It’s great that they do this,” Cristy said. “I’m pleased with the confidence it instills in the kids. They can just talk with random people walking through and they can talk about the beef and dairy process. They can answer questions with the public and they’ve developed communication skills.”