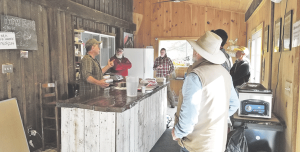 Brent Zimmerman is no stranger to farming. He grew up on a family farm in Michigan that raised dairy, hogs, hay and wheat. After high school he pursued a career in banking until a two-week vacation took him to Tuscany, Italy, in 1991. Instead of boarding his return flight, he stayed for 25 years and changed careers, getting back to his roots.

He and Alessandro Voglino bought a 1600s farm in the village of Caprese Michelangelo. It had been abandoned for nearly two decades so they renovated the structures and restarted the farming operations raising sheep, goats, cows and pigs. Zimmerman learned the craft of artisanal cheesemaking, becoming a master of the craft.

When the duo returned to the States, they only made it as far as the Hudson Valley of New York before deciding that Coxsackie should be the location of their new farm enterprise: Lime Kiln Farm. The 400 acres is home to 12 milking shorthorn cattle, 80 milk goats of multiple breeds and a flock of 180 white Dorper sheep, which he hopes to expand to 400.

Establishing the cheese kitchen was the easiest part of rejuvenating the farm and it was certified in 2015. The delectable cheeses are popular sellers on-site and at local markets. What Zimmerman wasn’t prepared for were the differences in herd management needs. He candidly shared the farm’s struggles and strategies for overcoming those challenges at the second annual Fall Round-Up Grazier Meeting hosted by Cornell Cooperative Extension of Albany County on Oct. 29.

“We had a tricky start here,” he said. “The pastures here were abandoned for a time before we bought the place so there were no parasites. But a few years in we started losing three to four sheep a week and we started to panic.”

Parasites were not problematic in the arid Tuscan mountains, but internal parasites thrive in the humid Hudson Valley. While Zimmerman knew the importance of rotational grazing, the demands of running a growing farm often mean farmers have to pick and choose what can be accomplished in a day. It’s easier to open the barn door and let the sheep go where they want. Now he’s steadfast about following a rotational grazing program.

“I’ve also gotten to know about each worm, its lifecycle and when animals are susceptible to that parasite and how long I can leave them on a pasture plot,” he said.

In a rotational grazing system, the animals are moved to a new pasture plot every couple of days, said Aaron Gabriel, a field crop specialist with CCE-Albany County. He recommends a grazing height of no less than three to four inches. This helps distribute manure evenly over paddocks.

“If animals are not rotated, it takes many years for manure to be dropped on every part of the pasture,” he said.

“Erosion occurs because water is not infiltrating down into the soil,” he said. “The physical health of the soil and biological health affect water infiltration.”

Microchipping each animal has also helped Zimmerman avoid parasite infestations. Although he prides himself on the care his animals receive – the flock of sheep are always eager for a pet and he would rather have a cow for 10 years rather than push them for three – a visual evaluation can’t always provide all the animal health information.

“We use a strict recordkeeping system with the microchipping. That way we know who is not putting on weight, who has worms more than normal so that we can cull them out,” he said. “I’m all about hands-on care and I pride myself on giving my animals a good life, but I need to be hands off on that part to make money.” 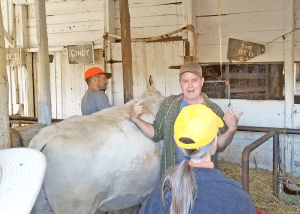 “There is value to every pound of nutrient, around 50 cents for nitrogen and phosphate, and 30 cents or so for potash,” Gabriel explained. “We want to manage our pastures and farms so that we only export nutrients when we sell animals, crops or milk, et cetera.”

It is helpful to do a mass nutrient balance on all farms to see the pounds of nutrients entering the farm system and those leaving, Gabriel said. Losing nutrients by erosion, volatilization, leaching, etc., is a loss of money and productivity.

When Gabriel removed the socks that had been placed on Lime Kiln Farm he found that no decomposition had occurred.

“The socks were only buried for three weeks in cool, wet soil,” he said. “As I think about it now, some brands of socks are treated with silver nanoparticles to prevent odors from bacteria. So, maybe socks are the wrong type of clothing to use.”

Biological activity is important to nutrient cycling and organic material is critical for holding water and nutrients. Evaluating the decay of cotton can be easily and inexpensively done on any farm and gives farmers an idea of the level of biological activity in the soil.