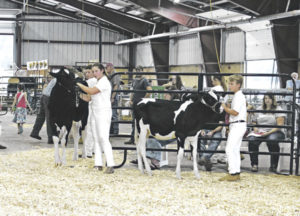 Competing at the recent Wayne County Fair is one of the ways that the Schultz family of Marion, NY, can showcase their animals. Owned by Shannon and Shane Schultz, Ranway Farms LLC is a 400-acre operation raising 30 head of beef cattle and 20 head of pigs and milking 100. The farm recently added 15 Jerseys to their mostly Holstein dairy herd. Ranway also sells 5,000 small square bales of excess hay and grows corn, soybeans and wheat.

“After missing it last year, everyone realized how much they missed it,” Shannon said. “Even though it was a lot of work, we sat down and talked about if it’s a risk we wanted to take going. The kids love seeing their friends and even more so this year. They also wanted to go if we could safely. We like that atmosphere where we help each other out. Even though they are all doing farm chores, it is nice to be away from the farm too.”

Showing their animals benefits the farm’s freezer meat business; however, sales have been up in the past 20 months. Like many cattle and pork operations, the pandemic has benefited business.

“It was like we were just trying to keep up,” Shannon said. “I had my normal customers but people calling me just looking for something to get in their freezer. It helped ups grow in that respect.”

The farm sold more beef from March to June 2020 than they had ever sold in those months. The farm was deluged with Facebook messages and phone calls. Since beef and pork have returned to store coolers, some customers have returned to supermarkets as their supplier, but not all.

“We definitely grew the freezer beef for sure,” Shannon said. “The hardest part was getting a butcher date. Luckily, we had a relationship with our butcher so we could get a standing order monthly.”

That was a different story for producers with only two or three animals finished a year and some still struggle to get a processing date.

“I talked with a processor yesterday and they’re already filling up for fall dates next year,” Shannon said.

Her farm uses Joe’s Market in Ontario for beef and Shale Springs for pigs. “We switched from Caver Meats in Clyde as it was so busy,” she added.

Beginning the process was just as hard. “Trying to find pigs was crazy this year,” Shannon said. “We went to Pennsylvania to get some of ours.”

Pigs are finished in five to six months. The Shultzes breed and raise their own calves and spend 16 to 18 months from calf to finished.

Another challenge at Ranway Farms is finding good help. Few want to work in the physically challenging environment on the farm when for the same pay they could work at a fast food restaurant.

“The new regulations on overtime requiring we pay time and half and minimum wage going up to $15 are both hugely impactful on our business,” Shannon said. “You can have an afterschool kid that you still have to pay $15 and train them in everything. It’s exhausting. You still have to do the job even though someone is there. It’s not affordable to have someone come in and do the job themselves. We can’t afford to pay that person. We’ve had some great kids, but it’s different from someone with experience.”

The farm sells its milk through Upstate Milk Cooperative. Shannon said that beef and pork provide additional revenue streams for the farm.

“We do a little of everything so when milk prices crash, it’s good to have the other stuff on the side and vice versa,” Shannon said. “We can have our hands in a lot of different pots. Yet, that is hurting us with the help situation.”

Even though the supply chain has been reestablished for meat, “it is going pretty strong. People are realizing they don’t necessarily want to go to the grocery store. Or maybe they tried freezer beef once and have come back.”

She markets the farm’s meat through social media and word-of-mouth advertising. They both have helped the farm grow the pork part of the business, which the Shultzes added seven years ago.

“It used to be a pig for ourselves and a beef cow on the side, but we kept adding more and more each year,” Shannon said.