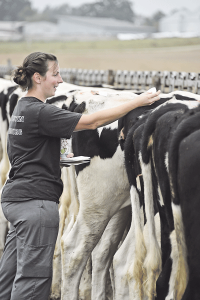 Facilities for special cows – cows in transition – should be nothing short of careful planning and consideration of herd goals.

John Tyson, Penn State ag engineer, said spikes in calving numbers throughout the year can easily overwhelm a facility. Tyson referenced a study that showed 65% of 170 herds in the Northeast were overcrowded by at least 25% for at least two months, and 4% of those herds overcrowded by 35%. “Transition calving areas need to have some flexibility designed into them to allow for hiccups in management or uniformity that are going to happen on every farm out there,” he said.

The basics for transition housing include good ventilation, dry comfortable resting area, access to feed and water, and competent footing. “These all allow the cow to be as productive as possible,” said Tyson. “With transition cow housing, the key is feed space – it becomes the key and number one driver in design.”

Other features of desirable housing for transition groups include ease in animal handling and observation, easy isolation, low-stress restraint readily available when needed, feed access and clean up. Tasks for caregivers should be simple and efficient to ensure cows are cared for properly.

Heat stress abatement is an important consideration in transition cow housing. “We know heat stress affects cows,” said Tyson. “It drops production and repro, but there’s good evidence that it affects the health of the calf itself.” Heat-stressed calves have more health issues, and may be less productive than unstressed herdmates when they enter the herd.

Tyson said while grouping arrangements can help manage cows and focus labor on groups that need the most attention, moving cows at the wrong time can add stress and invite health issues. “We want to minimize moves,” he said, “or do them at the correct time to minimize stress.”

Transition cow facilities are often placed close to the main farm, which means more eyes to watch cows. “As traffic increases, we may have too much noise and disturbance and cause extended stage two labor,” said Tyson. “Being in the middle of everything where there’s a lot of activity may not be the best option.” But the facility does not have to be completely removed from the main farmstead, and can be on the edge where there’s less noise and traffic. If the location is away from the main farm, protocol must include designating someone to observe cows regularly to watch for labor, and move cows into calving pens if necessary.

While there’s no single design that works for every farm, some sizing basics apply. Minimal allowance for dry cows is 100 to 125 square feet per cow, not including the scrape area. Maternity pens should be 175 to 200 square feet per cow. On farms where cows spend some of the day outside, square footage should not be reduced significantly because there will be times when outdoor access isn’t possible. Tyson recommends construction based on not having outside access, then if cows do go out, cleaning is easier.

One popular design for transition cows is the bedded pack. A well-designed pack should include controlled access to the pack and a scrape alley for daily manure removal. Access to the pack is through a dedicated area so manure drag is limited. “Cows need good access to water, but should only have it from the scrape alley so they aren’t slopping water back onto the pack,” said Tyson. “Place a board fence around the water so they have to come around it to get access to water.”

Bedded packs can become overcrowded, but work well when correctly sized. “It works well if the animals all read the book and assemble themselves on the 150 square feet they’ve been allotted,” said Tyson, adding that the pack is also a built-in manure storage with manure added daily. “We know that on most bedded packs, cows don’t perfectly assemble themselves, and tend to huddle up in small groups with open spaces between them, yet they continue to add more manure to that space. You might wind up with the cows on half the area and the barn begins to look empty.”

Penn State plans designate an area of 125 to 150 square feet of bedded area per animal and plenty of feed space in the front, and 30” minimum feed space should drive the design. “If we look at the manure piles and remove the cow, we see why we need that square footage,” said Tyson. “It seems like a lot of square footage, but in reality, a lot of it is to maintain a clean surface that gives us a clean cow and minimal risk of disease.”

Freestalls are also used for transition cows, and should be based on cow size and lunging requirements. In addition to space for the body and head, there should be adequate lunge space in front of the cow so she can lunge forward and bring her body forward with natural movement. Freestalls should be slightly larger than the average milk cow in the herd by about three to six inches to allow for the cow’s expanded size and her lack of nimbleness several weeks prior to calving.

“The issue with freestalls is we have to be timely with management and observation and make sure we move animals at the proper time from the freestall area to a maternity area for calving,” said Tyson. “We don’t want the calf born in the alley.”

With a pen barn, animals are placed in pens a few days prior to calving, and pens are cleaned between cows. The minimum pen size is 12’ x 12’, but 16’x 16’ is better. Uneven calving schedules can make it difficult to determine the number of pens needed. “Cows are social animals so you don’t want complete isolation from the rest of the herd,” said Tyson. “They should be at least able to see some herd mates.” Individual pens are ideal in the case of difficult calving because the cow is already by herself.

“These facilities tend to be very high cost per cow or per square foot,” said Tyson. “Many times, it’s at the top of the list to cut from the budget of the dairy facility. However, for high producing herds, the dry cow/transition cow program sets the bar. It’s a very good place to invest. We improve the start, get a better peak, and a more persistent lactation curve.”