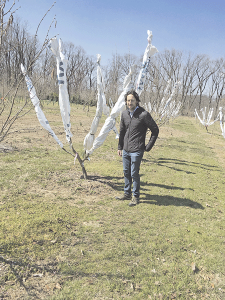 EAST BRUNSWICK, NJ — Television commercials featuring delighted children slathering Nutella® on their toast sowed the seeds for a revolution of sorts, and the proof bends in the breeze at a Rutgers experimental farm.

Prior to the invasion of the Italian chocolate/hazelnut spread, many Americans never ate hazelnuts.

“Unless you grew up Italian or German or Polish,” Associate Professor Tom Moran said during a tour of the experimental farm, “they weren’t a part of your experience.” Now the experimental farm at the New Jersey Agricultural Experiment Station is full of hazelnut trees.

Professor Reed Funk wasn’t thinking of making children happy at breakfast when he started experimenting with hazelnuts. He was interested in nutrition and in discovering a way the agriculture school could contribute to society. He even began eating plenty of nuts himself, Moran said.

Moran was an undergraduate when he began working with his professor. Funk gave him a lot of responsibility, he said.

They didn’t focus on hazelnuts at first. They experimented with Chinese chestnuts, walnuts, pecans, hickory nuts, almonds and heartnuts (Japanese walnuts), but hazelnuts stood out for the smaller size of the trees and the shorter duration to production. “It’s basically a bush,” Moran said on a walk through the orchard of hazelnut trees at various stages of growth.

Moran also noted it takes about 15 years for a pecan tree to produce nuts and while those trees can be grown in New Jersey, they are abundant all along the Southeast coast. Hazelnut trees can flower within two years and have a significant product in three to four years and reach a peak yield in seven to eight years.

Almond trees leaf out too early to be a good crop in the Northeast, Moran said. They also require spraying. Chinese chestnuts would be the most commercially acceptable, but they too require spraying and Funk wanted to reduce chemical inputs.

“Hazelnuts really stood out,” Moran said, noting the nut is a high quality, high-protein product that can be cultivated on marginal land. He explained hazelnut trees thrive on the steep slopes overlooking the Black Sea. Worldwide, it is the sixth most important tree nut crop.

The trees will grow in the belt between North Carolina and southern New England. Moran sees stands all over New Jersey and in Pennsylvania and New York.

“The statistics say through Zone 6, but Zone 5 is probably also okay. A lot of Zone 5 farmers want to try,” he said.

Moran presented at the Northeast Organic Farming Association Winter Conference. He discussed the Eastern Filbert Blight (EFB) and attempts to develop a resistant strain. About 2% of trees appear to be resistant to the blight and Moran has been breeding these. 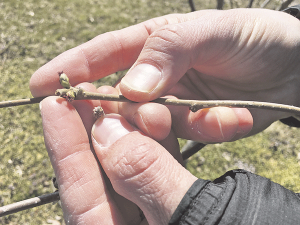 “Twenty years ago EFB was a terrible problem,” he explained.

Hazelnuts were brought to the Pacific Northwest in the late 1800s and had about 100 years without EFB, but the fungus was found in Washington State in 1960. Moran has been breeding the most resistant cultivars and now has given several farmers their own stands of trees.

The native American hazelnut doesn’t have a bad taste, but the kernel is small, he said. Moran concentrated on the European hazelnut for the kernel size and the taste and its thinner shells.

He’s hardly the first New Jerseyan to do so. There is a nearly 100-year-old European hazelnut tree next to the Tempe Wick house in Jockey Hollow National Park, he said.

The trees that are successful are cold-hardy, Moran noted. They can’t breed when the male flower is frosted. The nuts mature by late August to early September.

Moran and the experimental farmers plant with 18 inches between rows and 10 inches between trees. He said he learned not to plant too close to the woods because squirrels, groundhogs, raccoons, chipmunks and other creatures enjoy them. Some farmers bring in high-energy dogs to chase away the animals, especially terriers that like to go after rodents. Moran also suggested corn or wheat fields as a buffer.

If a tree is planted from fresh seed, it will develop multiple trunks. In Italy and France, farmers prune to a single trunk for a higher yield. A little pruning is needed to shape young trees and also when the canopy closes, he said.

There are many types of harvesters that are used for hazelnuts, he said. He has a vacuum harvester from Italy that works well. He also brought in an open cleaning machine to wash and dry the nuts. In a commercial dryer, the nuts will be dry in two days; otherwise they take about two to three weeks.

When the nuts are in the large drying area on the farm, Moran says his children love to slide around in them. The nuts then go into plastic tubs. Hazelnuts can be put in cold storage or frozen.

Yield is important, Moran conceded, but a high quality nut is the highest priority. Those high quality nuts will continue to be in demand, Moran said at the NOFA Conference.

Ferraro, the Italian confectioner, can make more candy and other products with enough nuts, he said. Up to 90% of hazelnuts are used in candy and baked goods. Turkey produces the most hazelnuts (about 70%), so the price worldwide depends on the price in Turkey.