Expect milk markets to be turbulent 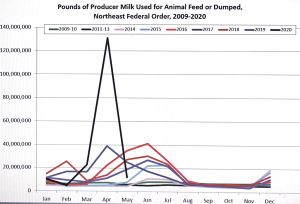 As hay gets harvested, milk quotas cut into farmers’ wallets and Coronavirus Food Assistance Program (CFAP) payments slowly dribble into the farmstead, Northeast dairy farmers are now seeing how bad the 349 million-pound “Great Milk Dump” is affecting the dairy industry and beyond.

To add insult to injury, the E.V. Baker Professor of Agricultural Economics Emeritus at Cornell University, Andrew M. Novaković, said, “We should expect milk markets to be turbulent for the rest of the year. I think we’ve seen the worst of the price drops, which is great, but my guess is that markets will be unsettled for the foreseeable future and that the pandemic is not done playing games with us.”

The 42-year veteran of dairy market economics and policy has been tracking the Northeast dairy situation. “Heading into 2020, the January and February year-over-year producer receipt increases were modest – about 0.75%, give or take. March jumped up 2.0% and April was up 1.7%. This makes the -1.9% retreat in May all the more fantastic,” he said. “I’m assuming that this is primarily reflecting the discouragement created by cooperative Base/Excess plans and some rationing of procurement by processors who have independent milk supplies.

“New York milk production started with larger increases early in the year – -2%, give or take – but is reported to have declined 3.7% in May (YOY). Pennsylvania had a more sluggish start to begin 2020 and dropped 3% in May. Vermont production was declining 1% or more through April in 2020 but dropped to -6.4% in May. The national drop in May is estimated at -1.1%.

“Producer milk used in Class I was down 2.4% in May even though there was increased meal consumption at home helping fluid milk sales,” Novaković continued. “The use of producer milk in creamers, ice cream, yogurt, sour cream, cottage cheese and other ‘soft’ products used heavily in foodservice and in homes showed a big drop-off in April and May (-15% and -12%). The Class III cheese and whey category took a big hit in March (-4.3%) and April (-3.4%). May showed a rather big rebound of +3.3%. I think the Northeast numbers are primarily reflecting current sales opportunities.”

Class IV butter and milk powders have their own market. “Butter is big in foodservice. Milk powders are gigantic in export sales. Both products are also the place of ‘last resort’ when there is excess milk that can’t find a profitable home. Although the Northeast has some ‘balancing plants,’ like O-AT-KA in Western New York, AgriMark’s Springfield, Massachusetts, plant, or the Land O’Lakes plant in southern Pennsylvania, we don’t have a lot of extra room for these products. That’s why we ended up dumping more than other places. Still, the amount of producer milk that went through Class IV plants in the Northeast was higher than 2019 each month of 2020. In April it was up 6.8% and then 4.6% in May,” said Novaković.

So what do the coming months indicate for concerned dairy families? “With the regretful help of collapsing milk prices, we have started to get milk production under control in quick order. Usually it takes quite a bit of time for farmers to change their commitment to milk production because of low prices, but with new and vigorous Base/Excess pricing plans by cooperatives, I think this response was accelerated,” he said.

The Class III futures for July and August are moving toward $20/cwt. with a 12-month average of over $17/cwt. As of June 22, USDA has paid over $895 million to dairy farmers through CFAP, and there is some optimism on prices because of lower milk production levels and higher demand because of the reopening of restaurants, foodservice companies and (potentially) schools.

Through Gov. Andrew Cuomo’s Nourish New York initiative, $1.8 million has been spent on over five million pounds of surplus milk, both fluid milk and milk used for finished products, such as yogurt, cheese and cottage cheese. This has been redirected to more than 100,000 New York households, both helping families in need and dairy farmers who have been impacted by market changes as a result of COVID-19.

University of Wisconsin Dairy Economist Mark Stephenson suggested, “Dairy producers proceed cautiously as we move ahead in 2020. While Class III values for the third quarter of 2020 appear better, there is still uncertainty in the market and whether these projected prices will hold. Despite the recent uptick in milk prices and the fact that we are opening up and adjusting to our new ‘normal,’ remember that the CDC is predicting another wave of the coronavirus to hit this fall. Nobody can say with any certainty what the impact of a second round will have, if it does in fact arrive.”

Is there anything that can be done about this uncertainty? Novaković had a few candid thoughts: “Play the long game and develop your basic business plan around expected average prices and stick to it. Don’t let low prices get you overly pessimistic, but also don’t let high prices get you overly optimistic. The objective of this game is profitability over a period of time, say three to five years, not necessarily every year.

“Survival is about liquidity and solvency. Borrowing money or not paying your bills on time helps with liquidity but it damages profitability and risks insolvency. One strategy to deal with this challenge is to build more working capital and have more feed on hand or committed. If you don’t have profits in one year, it is hard to build these kinds of reserves, but having them may make all the difference in surviving the bad years.

“Have solid safety net programs in place before disaster strikes and use them. For all their good intentions, it is very difficult to get new government programs in place after a disaster strikes,” he continued. “Given the outlook for 2020, it isn’t surprising that many farmers did not sign up for Dairy Margin Coverage but it is still an important risk management tool. About one-third of U.S. farms will get substantial payments under DMC. Had everyone participated, there would have been no need for the direct payments under CFAP. Moreover, those DMC payments are coming to the mailbox a lot more quickly than the CFAP payments will.”

Novaković fears the new normal will come with even greater challenges all along the dairy supply chain. “We should approach this with hope and optimism but also with an understanding that strategies that may have been good enough two or five years ago are probably not enough to ensure success in what is to come,” he emphasized.