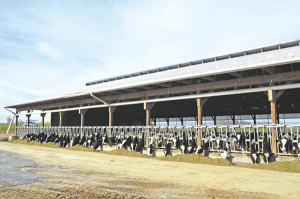 When a large dairy farm is scrambling to find space for a significant population of animals, the best solution is likely to be a new building – or buildings. That’s the case for Teabow Farms, owned and operated by the Stup family.

The Walkersville, MD, farm is home to about 1,000 cows and the same number of heifers ranging in age from newborn to first freshening. The family is currently in the process of constructing additional facilities that will allow them to house heifers close to the main farm.

“The facilities are inadequate right now,” explained farm owner and general operations manager Jimmy Stup. “We’re updating our heifer housing.” Heifers are currently located in several different buildings on the farm and also at a custom heifer operation, so Stup’s plan to bring them to one area will significantly improve efficiency.

If calvings were evenly distributed throughout the year, dairy farmers would have an easier time with housing. But even with modern estrous synchronization programs, lower conception rates in summer result in uneven groups of young stock. Stup said animals bred in June, July and August often come back into heat later in summer and conceive. The resulting calves add to the calves conceived on first service, often doubling the population.

This seasonality results in large numbers of calves born in August, September and October. “Sometimes we’ll have five or six heifer calves a day,” Stup said. “It doesn’t take long to overwhelm the facilities. Then two months later, we’ll have a big slug of three- and four-month-old calves.”

As their farming operation expanded, the Stups purchased a farm close to the main farm, and that’s where they built a barn for about 200 heifers. A second building, planned for summer of 2020, will be a mirror image of the two-year-old building that’s already housing heifers. “The long-range goal is to put heifers that are confirmed pregnant in the newer barns,” Stup said. “Then we’ll move the smaller heifers to a facility that’s designed for them.”

While the second barn isn’t up yet, the current construction project is a new liquid manure storage facility. The in-ground storage pit is 10 feet deep with a perimeter of 88 feet, and will have six months’ storage capacity for roughly 225 animals that average 1,000 pounds.

NRCS designed the manure pit and will inspect it to ensure it meets specifications. The digging is finished, so now it’s a matter of refilling the pit with stone to create a base of the proper grade prior to pouring concrete. “My goal is to have it up and running by Christmas,” Stup said. “We never know when the weather’s going to turn, but we keep plugging along.”

The heifers are comfortable on a straw pack that’s cleaned out once a year and spread on crop ground. However, there is enough liquid manure to require dedicated liquid storage. “We’ll scrape the barn about three times a week,” said Stup. “That will go into the new pit.”

Since the current heifer barn holds only half the number of animals that will eventually be housed on the farm, the new manure storage will fill slowly. “We only have one building for heifers now, so the manure storage might hold a year’s worth,” said Stup. “Once we build the second building, it’s going to fill faster. But we’re building the storage with the second building in mind.” At some point, Stup would like to add third and fourth buildings to accommodate heifers of all ages on the same farm. He’s also considering plans to construct a building for smaller heifers.

Maryland farmers are currently spreading manure following crop harvest, and can continue manure application until Dec. 15. After that date, they must wait until March 1 before they can apply manure again. Regulations regarding buffers and setbacks vary from field to field, depending on waterways and neighboring properties.

Stup said the current heifer barn is capable of housing animals in full confinement, but he likes to provide animals with access to pasture as much as possible. “They have access to a large pasture and a wooded area,” he said, “but in the heat of summer, they’ll stay inside.”

Although fans aren’t in the plans for the additional heifer barn, Stup said he’d consider adding them at some point. “Fans for heifers are nice, but they’re more of a luxury than a necessity because heifers aren’t giving milk,” he said. “I’d like to have fans mostly to help with fly control.” Stup’s observations over the years have proven that flies won’t stay in an area where there are fans. “Think of how small a fly is,” he said. “They aren’t going to fight a five or 10 mile per hour wind all day. Fans do help with ventilation, but if the buildings are open with air moving through them naturally, it’s much better.”

Like most modern barns, the existing barn has curtains to help regulate conditions inside. Stup said while it’s usually more pleasant for workers when buildings are closed, it’s better for animal health if buildings are open.

While the plan is to begin construction of the second barn this coming summer, the project is dependent on whether or not milk prices continue to improve. “They’ve been getting better, but we have a ways to go,” Stup said, referencing a slight uptick in milk prices. “We spent four or five years with breakeven or worse milk prices, so we have to catch up for a while and make sure the market doesn’t start to drop again. If it does, we might have to re-analyze our plans.”