Every cow is special – Part One: What happens during transition? 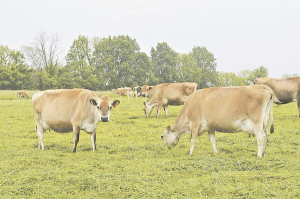 Every cow on the dairy farm is special, and each has special needs at least twice during the year. Dairy managers and employees can work together to identify and manage these cows in the most timely and appropriate manner.

Dan McFarland, ag engineer educator at Penn State, said cows during the transition period are often recognized as special. McFarland described transition cows as far off cows, dry cows, close up dry cows, cows in the maternity area, just fresh cows and post fresh cows. “We also have cows that have special needs,” he said. “Working groups such as cows that need their hooves trimmed, pregnancy checks, fresh cows that have been treated and any cows that need special attention because they’re lame or sick.” Cows entering or leaving the herd are also categorized as having special needs.

Herd size is usually the main factor that influences the way in which special cows are grouped and managed. McFarland said larger herds may have many groups, while medium sized herds may combine groups. Small herds can be more challenging to group simply due to facility size and available space.

Dr. Adrian Barragan, assistant research professor extension veterinarian, Penn State University, said transition cows are the most special group of cows on the dairy farm. “The transition period is 21 before calving to 21 days after calving,” he said. “The close up cows are 21 to 14 days before expected calving date, and cows that are 21 to 30 days after calving are fresh.”

Barragan said transition is a critical period for the cow for several reasons, all of which occur simultaneously. Transition cows eat less, so there’s a decrease in dry matter intake. At the same time, the cow has higher demand for protein and energy due to fetal growth and the initiation of mammary gland function. “That increases the likelihood of mobilizing reserve body tissue, mainly fat tissue,” said Barragan. “When the cow mobilizes fat tissue, instead of glucose, they produce an additional source of energy known as ketone bodies.” While cows can use ketone bodies if they’re in the right amount, excessive ketone bodies results in disease and the cow will show clinical signs of ketosis.

Barragan referred to ketosis as a ‘gateway disease’ because it impairs the immune system, increasing the cow’s susceptibility to infectious diseases. “The cow has high demand for minerals to produce milk, and a lot of calcium comes from the bones and from TMR intake,” he said. “When she stops eating as much, she also has increased risk of hypocalcaemia, the other gateway disease, because hypocalcaemia also impairs the immune system and increases the likelihood of the cow to become sick with infectious disease.”

While it’s normal for the cow’s system to activate fat tissue when feed intake decreases, pro-inflammatory molecules are also activated. “That will increase insulin resistance,” said Barragan. “That means the cow cannot use glucose – even if she had glucose, she cannot use it. If that happens, the cow mobilizes even more fat tissue. It’s a vicious cycle.” Barragan added that the combined result of these physiological events is activation of inflammatory cells and decreased immune system function.

Since the transition period is critical to the cow’s health and production, it’s often the focus of dairy research. Barragan cited one study in which researchers found biomarkers that identify and measure metabolites that indicate fat tissue mobilization, then found a direct correlation between increased metabolite levels and increased risk of post-calving DA (displaced abomasum).

Another consideration is that high mobilization of fat tissue also decreases reproductive performance of the cow post calving. Barragan said almost 80% of cows that gained weight after calving achieved pregnancy after first service, while cows that lost weight were far less likely to conceive. “Even maintaining weight during the fresh period improves reproductive performance,” he said. “It’s important to manage the mobilization of fat tissue in order to allow them to cope with the challenges, not become sick and have good reproductive efficiency after the transition period.” Barragan also noted that it’s undesirable for the cow to have an exacerbated inflammatory response resulting from ketosis because the immune system can’t target specific bacteria.

Cows experience high level of stress and inflammation around calving time, which Barragan said is normal. However, if cows are managed in a system that promotes a decreased inflammatory response, they’re less likely to suffer from metabolic disease.

Barragan cited a recent study at Penn State showing that primiparous (first lactation) cows have a higher level of inflammation, pain and stress compared to older cows. The study measured biomarkers for both pain and inflammation, and both are elevated during the first week post-calving. “These are the most susceptible animals and have to be managed the best,” said Barragan, “especially when we are co-mingling first lactation with other cows and also when we have high stocking density.”

The same study showed primiparous cows had cortisol high levels at 24 and 48 hours post-calving, but those levels equaled those of multiparous cows at seven days. “Those primiparous cows are some of the most susceptible groups in our herd,” said Barragan.

“How we manage metabolic stress and inflammation around calving will impact the proportion of cows that will become sick,” said Barragan, “and also the reproductive performance of our animals.”

Barragan summarized the physiology of transition: “The cow has a drop in dry matter intake, which will cause the cow to start mobilizing body reserves,” he said. “She is going to lose body condition, and that will increase the risk of metabolic diseases and increase the rate of infectious diseases. All of that will impair fertility.”