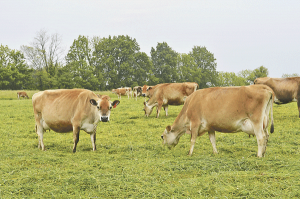 Although every cow on the farm is special, certain groups of animals require extra care and attention at various times throughout the year.

Special cows, whether they’re transition cows or part of a group separated for pregnancy checks or hoof health, will have to be moved at least once. Dr. Adrian Barragan, assistant research professor and Extension veterinarian, Penn State University, said while moving cows is necessary, it’s important to minimize moves. “Cows have different hierarchies, and every time you put new animals in a group, those animals have to fit within the hierarchy,” he said. “That process takes about 48 hours. During those two days, animals will have decreased laying time, decreased [feed] intake and a drop in milk production – especially first lactation cows.”

To make moves easier on the cow, Barragan suggests moving cows in small groups rather than moving a single cow or just a few. “Try to move at least four or five cows so they have at least a few mates from the previous group,” he said. “That will help decrease social stress.”

Cows designated as special because they’re close to calving can be grouped in several ways. One way is to designate a combined close-up maternity group. “This is my preferred,” said Barragan. “You move the cows in the close up maternity pen at about 21 to 14 days before expected calving date, then monitor which cows will calve in that pen. The challenge with this system is that it requires 24/7 monitoring because cows will calve in that pen, and you have to make sure someone is monitoring in case they need assistance. This requires more labor.”

Another option is to observe cows for signs of imminent calving, and moving those animals to a calving pen. The potential problem with this system is that cows moved during this stage may experience longer labor, which increases the likelihood of dystocia. A third option is to move cows to a maternity pen two days prior to calving. The expected calving date is an estimated average based on breeding date, but can vary by five to eight days before and after the calving date. Because the date is not precise, it’s complicated to move cows two days prior to calving date.

Some herds are simply divided into two groups: dry cows and lactating cows. Barragan said this grouping option is good for small herds where there’s ample barn space, and nutrition can be managed to prevent hypoglycemia. If space allows, the dry group can be divided into far off cows and close up cows. With more barn space or a slightly larger herd, a three-group option might be dry cows, fresh cows and lactating cows. Barragan said the optimum grouping strategy is far off, close up, fresh group and lactating group because each group can be managed for its unique nutritional needs.

Stocking density affects cows in several ways. Without sufficient bunk space, some cows won’t get enough to eat, making them prone to metabolic disease. When there are too many cows for the number of stalls available, cows will have less laying down time and spend more time standing on hard surfaces, increasing the risk of lameness.

Barragan said the recommendation for bunk space is at least 30 inches per cow. “If there are headlocks in stalls, about 20% of those headlocks are not going to be used, so account for that,” he said. “We always want two-row freestall barns, especially for transition cows – close up and fresh. If you have a three-row freestall barn and 100% stocking density, you’re going to be overstocked at the feed bunk.”

Barragan referenced a study that identified two main factors that stimulate cows to go to the feed bunk and increase their feed intake: the delivery of fresh feed and feed push up. When feed is delivered in an overstocked barn, not all cows have access to fresh feed. “Those cows do not catch up later,” said Barragan. “If you see the cows not eating here, they don’t eat later. The reason is because cows are herd animals and like to do everything together.”

The result is that while some cows will be at the feed bunk, others will be waiting. The cows that were eating will go lay down, and the others will follow – without eating, or after eating just a little.

The placement of rails on stalls is critical for all cows, and especially important for special cows. Dominant cows will take over stall space, and the result is often two cows in three stalls. Bedding management is important for all cows and influences laying time. “A cow has to lay down for two main things – ruminating for producing milk and preventing acidosis, and also to prevent lameness,” said Barragan.

He added that cows will check stalls before deciding to lie down, and if the stall is wet, she’ll move to another. Even if the cow lies down as soon as she finds dry stall, she has spent time and energy seeking a comfortable resting place.