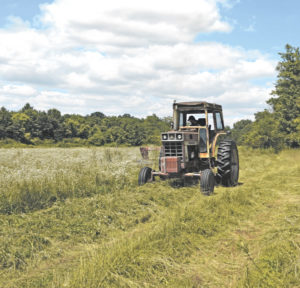 With corn prices up and futures uncertain, many cattlemen will rely more heavily on stored forages this coming winter. But what if hay was baled late, was rained on or came from a particularly poor stand? Perhaps the ideal haymaking window came and went too many times, a new field was skipped because it was just starting to mature or a neighbor offered a field that hadn’t been cut and baled for several years.

The cost of putting up hay is fixed – it costs the same to cut, rake and bale hay no matter the quality. In some cases, especially with late first cutting, the cost is actually more because volume is higher. However, the quality of late, first-cutting hay is usually less than optimum.

Hay quality, whether good or bad, is the result of maturity stage, leafiness and leaf-to-stem ratio. By late summer, leaves have dropped and seed heads are forming. Stems are “stemmy” and tough, and weed species are likely present, especially if the field hasn’t been mowed or grazed regularly.

Wet summer weather can boost hay growth, but the result will likely be lower quality because excess stem growth means excess lignin. By the end of summer, the plant is putting energy into producing seed and as plants mature, TDN and energy drop.

It’s easy to look at a large bale and estimate its nutritional value, but it’s impossible to know the true quality without forage testing. Quality changes over the season – a sample from hay baled in mid-May or even late June will likely be quite different from a sample taken from hay baled in mid-August. A single hay sample is insufficient to accurately assess quality. Hay should be sampled in lots designated by field location, species and cutting date. Keep notes about weather conditions at cutting/baling and the species and source of each sample.

Laurent said winter feeding begins in summer when the sun is shining. Ideally, hay has been made at the right time and under ideal conditions. “Hay is a necessary thing to deal with,” he said. “It’s the most expensive feedstuff if we look at what we get for the amount we have to feed and spend.”

The goal should be minimizing the cost of hay, and producers should be aware of common winter feeding mistakes such as overestimating bale weight and quality and underestimating cow weights. Although many cattlemen estimate the average cow weight at around 1,200 pounds, Laurent said most are closer to 1,400. Cattlemen also fall short in estimating hay needs. Although more producers are storing hay covered or indoors, loss should be considered.

The hay estimation process should start with storage method – hay stored inside will have the lowest loss. Hay stacked outside on the ground will have 40% or higher loss from weather and wicking moisture from the ground, especially if it isn’t on a rock pad. For hay stored outside in stacks or rows, poor row alignment will influence loss.

Consider how hay will be fed. Feeding hay directly on the ground can easily result in 50% loss. Using a hay ring will minimize loss. “Research has shown that cone-type rings with solid bottoms can get losses down to under 10%,” said Laurent. “There will still be some loss in a ring, but it’s significantly better than without rings.”

For groups of cattle that can consume a bale in one day, unrolling is a reasonable alternative. Unrolling can reduce loss to as low as 15%, and in many cases, waste hay and cattle manure can improve soil organic matter on otherwise poor ground.

Laurent suggested estimating hay consumption based on a percentage of body weight. A 1,400-pound cow consuming 50% TDN or better hay at 2.5% of her body weight will consume about 35 pounds a day. However, that figure doesn’t account for loss.

“We need to adjust for waste,” said Laurent. “For inside storage, we’ll have about 5% loss. Feeding in a simple hay ring is another 15% loss. The 2.5% becomes 3% – we need to have at least 42 pounds of hay in inventory multiplied by however many days you’re going to feed.”

Most large square or round bales are sold or calculated by the bale rather than by weight. “What that bale weighs is a function of size, density of the bale and moisture,” said Laurent. “Density can be affected by the baler model, settings, hay species and forage maturity.”

“The plan should be to put condition on dry cows,” said Laurent. “They’re the cheapest to feed. They eat less and don’t need as much nutrient-dense feed. We can get away with hay that’s marginal quality.” For spring calvers, lack of pasture between December and March means potentially lower quality feed to maintain a BCS of 6. Fall calvers are often bred in December and January, which is another time feed quality is down due to potentially poor hay, so be aware of the nutritional needs of those cows.

Forage testing to determine hay quality is essential. “Is it good enough to meet the needs of cows in critical periods?” said Laurent, adding that quality is not determined by color. “Poor quality hay is a double-edged sword – they can’t eat much of it, it has slower passage, they eat less and what they’re eating is less nutrient-dense.”