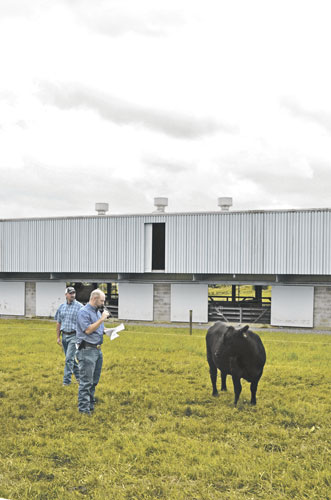 Think about the beef cow’s calendar: Over the 12 months in a year (nine of which are dedicated to carrying a calf), there isn’t a lot of time for her to be successfully rebred for the next calf. Establishing a solid breeding schedule for replacement heifers can be challenging, but it’s critical to overall herd performance and ultimately a heifer’s lifetime calf crop.

Dr. John Campbell, professor at the Western College of Veterinary Medicine, discussed goals that lead to reproductive momentum – a plan that ensures heifers will become pregnant on time, the first time, and in subsequent years.

The goal is to have a high percentage of cows pregnant and a uniform calf crop. “To do that, we need a relatively short breeding season (42 to 45 days for heifers, 63 days for cows),” said Campbell. “We’d like to breed heifers to calve as two-year-olds, and we want to have adequate replacement heifers to meet our goals – whether we’re trying to expand or maintain the herd.”

Campbell outlined reproductive goals for heifers, including pregnancy fairly early in the first breeding season. “We want them to deliver a live calf, so we make sure they’re vaccinated appropriately and do things to minimize fetal loss plus loss to dystocia,” he said. “We’re trying to set them up to protect the fetus. Thirty to 60 days prior to the breeding season is the ideal time to provide maximum protection to the fetus.” Campbell said heifers absolutely must receive modified live pre-breeding vaccine for IBR, BVD and other diseases included in combination vaccines.

Bull selection and fertility is another pre-breeding consideration. Campbell explained that scrotal circumference is an important predictor of age at puberty of that bull’s future daughters. Bull selection also helps minimize calving difficulties.

Biosecurity is especially important for heifers because young animals don’t have adequate immunity to a variety of diseases including trichomoniasis and vibriosis that can result in fetal loss. “If you’re going to buy replacements, you need to know about the farm those heifers come from, their vaccinations, their history of infectious disease,” said Campbell. “You can easily bring disease like Johne’s onto your farm.” Campbell added that a perfectly healthy-looking bred heifer could potentially be carrying a persistently infected BVD calf that will eventually infect other calves.

However, even with a good plan, Campbell said that with a single mating of a fertile bull to a fertile heifer, there’s only a 60 to 70 percent likelihood of a calf being born. “Nature limits reproductive success,” he said. “It’s higher in cattle than in other species. A lot of cows become pregnant and lose the embryo by day 14, and then the cow cycles again when we expect her to.” Poor fertility due to poor body condition or nutritional deficiencies will cause a significant drop in that percentage.

Another obstacle is a fixed gestation of 282 days, so cows must conceive within about 83 days of calving to continue calving at about the same time every year. Cows will start cycling about 50 to 60 days post-partum, but there’s a delay in heifers’ first estrous due to suckling. Heifers will usually cycle 80 to 100 days post-partum, but only if body condition is good and there are no mineral or other nutritional deficiencies. Campbell said the lag is due to normal biology.

There’s still debate regarding the appropriate target weight at first breeding. Campbell said the old adage of 55 to 65 percent of mature cow weight has been downgraded to 55 percent. He cited work in Nebraska suggesting that heifers could be fed to reach a lower target weight and still have reasonable reproductive success. “As you get down lower, you’re going to have fewer heifers cycling at the start of breeding,” he said. “You will save some money on feed costs, so it comes down to a decision. It’s also an issue whether you want to retain a higher number of heifers in a replacement group in order to compensate for animals that may not get pregnant.”

With everything in place for breeding, it’s a matter of math. The onset of puberty occurs in most heifers at 10 to 14 months, which can vary by breed and genetics. “If we want to target heifers to calve at 22 to 24 months of age, we want to give them 90 to 100 days between calving at the start of the next breeding season,” said Campbell. “Remember they have a longer post-partum period. They have to become pregnant at around 388 to 418 days of age, and that’s right around the time puberty is starting in many heifers. They need to reach puberty 21 days before the first day of the breeding season. Often they’re just becoming puberal at the start of breeding.”

Ensuring a second pregnancy for the first calf heifer is the next challenge. Mature cows cycle about 50 to 60 days after calving, but first calvers take significantly longer – 80 to 100 days. “The big take home message is that if we want replacements to calve a second time at around the same time of year, we need them to calve in the first 21-day period or earlier,” said Campbell. “They’re going to have up to a 100-day post-partum interval, and even calving in the first 21 days of the breeding season, they may not all be cycling by the start of the next breeding period. They’re perfectly good, fertile heifers but may not start cycling until the second heat cycle of the rest of the cows.” A separate, earlier breeding season for heifers helps establish reproductive momentum and allows heifers to become part of the mature cow herd.

For the best success in settling heifers in the first 21 days of the following breeding season, Campbell suggested breeding those heifers 20 to 30 days prior to the cow herd. “In order to be cycling as replacements, they [replacement heifers] probably need to be chosen from early calving cows,” he said. “You need that reproductive momentum established early.”