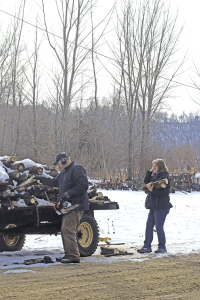 “Here in the Northeast, we’re on the leading edge of the EAB invasion,” said Siegert. “In 2019, we’ve been monitoring the expansion of known EAB infestations as well as detecting several new ones. The Global Tree Specialist Group completed their threat assessment for ash in 2018 and concluded that EAB continues to functionally extirpate ash in North America. Eastern ash species are all classified as critically endangered due to their susceptibility and proximity to known EAB infestations in the east.”

Eastern North American ash species vary widely in susceptibility to EAB. “Research suggests that white ash and blue ash on some sites may weather the EAB invasion, whereas green ash and black ash are more vulnerable,” said Siegert. “We currently have several management techniques being evaluated in pre and post EAB forests. Hopefully we’ll find more impacts in these aftermath forests based on our tools available when an EAB invasion wave is at its greatest and beetle pressure is heavy on those trees.”

While extensive EAB research has been conducted in the Midwest (because that’s where the EAB has been entrenched the longest), a New Hampshire study is investigating whether patterns of survivability similar to those in the Midwest will occur. Siegert explained the study being conducted in the 226-acre Shaker State Forest in New Hampshire. “When we sampled girdled trees in 2014 and 2015, we found EAB was present but it was very light,” he said. “Based on the reconstruction work I did there, I’m confident that it was present for only one to two years before 2014 or 2015. It was just moving into that forest, which gives us an opportunity to evaluate it over time.”

A timber harvest in part of that state forest in 2014 and 2015 reduced the volume of ash trees, but steep rock faces in the forest prevented equipment access, resulting in untouched areas that served as the control group. In 2017, annual ash health assessments began. “We found EAB had been there for a couple of years based on tree ring work,” said Siegert. “In 2019, we started to see ash mortality levels that we expect to advance rapidly in an exponential curve we’ve seen in other EAB invasions. We’re going to monitor that, and one way of doing that is conducting annual ash assessments.”

Siegert said the main firewood concerns are wood-boring pests such as Asian longhorned beetle or EAB, or gypsy moths that lay eggs on wood. The appearance and spread of the spotted lanternfly is a more recent problem, with egg masses that are easily missed and transported on firewood. And insects aren’t the only problem – oak wilt and thousand cankers disease are easily moved on firewood.

“We know firewood is a major vector for forest pests nationally, especially firewood used for recreational purposes,” said Siegert. “Firewood is one of the few forest products that is moved both commercially and recreationally. There are regulatory difficulties and challenges that come with that, including identification, detection, response and compliance. A commercial firewood producer can be targeted for outreach, but the person who’s moving firewood recreationally is difficult to target.”

Siegert said recreational firewood is all about the user’s experience. “Transportation costs are not a factor,” he said. “People will move it long distances. There’s a high value placed on easy accessibility to firewood – people don’t want to get to their camping area and not have firewood to burn. They’d rather bring it with them.”

To illustrate how the firewood issue was addressed in one area, Siegert explained work based on the proximity of camping areas to the New Hampshire Motor Speedway. “Approximately 75% of the more than 5,000 campsites at the speedway are occupied by out-of-state fans,” he said. “It was a great opportunity to increase awareness of moving pests in wood. We let people know ahead of time on the website and campers’ guide, information was mailed to ticket holders and there were press releases and radio spots picked up by NASCAR-related Facebook and Twitter.” Siegert said a lot of wood came from surrounding states, but about 15% of firewood originated from within the federal EAB quarantine area and 80% came from within 200 miles of New Hampshire. However, wood was also brought to New Hampshire from California, Washington, Florida and Georgia.

Another Northeast study involved interviewing close to 300 campers who brought their own firewood to campgrounds. “More than 25% of campers said they always or often brought firewood from home,” said Siegert. “Ninety-two percent had heard of invasive forest pests, but fewer than 25% could name one unless they were prompted. Campers tend to believe that firewood is safe to transport, and don’t want to risk not having it when they get there.”

Another study determined the significance of EAB developmental states at the time of harvest. Four harvests in May, July, September and November with 10 trees per harvest were tracked. Trees averaged 12 inches in diameter and were processed individually through a commercial firewood processor. The study assessed EAB on over 9,000 total pieces of split wood.

“We found the risk at harvest was lowest on material harvested in May,” said Siegert. “About 13% of total EAB density at this stage emerged as adults. Most were early instars and would die in the split wood before they had any chance to develop to adults.” Siegert added that the greatest risk was from wood harvested in November, when a lot of the insects were in a later overwintering stage and more than 30% could potentially emerge as adults.