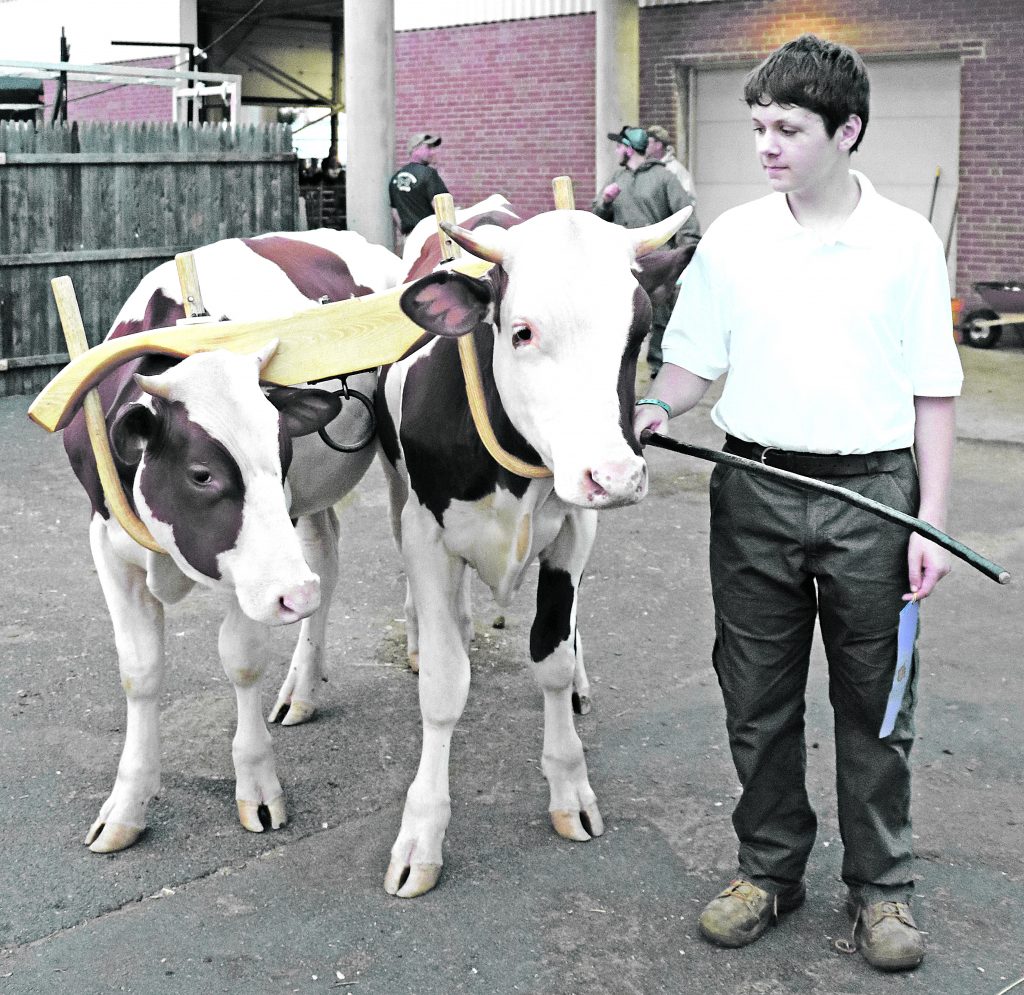 by Laura Rodley
SALISBURY, MA – When Eli Bartlett wanted to join a 4-H oxen club, there were no clubs near him. His aunt, Donna Bartlett, asked Mark Winslow, the leader of the nearest oxen club, which happened to be in Maine, if he could join. The answer was yes.
An hour’s drive away, the club is the Cumberland County Brass Knobs Working Steer 4-H Club.
It was also his aunt who got Eli interested in ox pulling. When he was younger, she had an oxen team that she showed at open shows. “Every time he’d see them when he was little, he’d say he wanted to drive a team. Finally he was old enough to go into 4-H,” said his father, Rob Bartlett.
Eli joined 4-H and worked with his first team, Huck and Finn, throughout last year. He showed them in Maine. They grew up and got too big.
In November of last year, he got his second team, red and white Holsteins steers that were half-brothers, born on Sept. 28 and Sept. 29 at a farm in Western Massachusetts. He named them Mark and Twain. His oxen weigh 1,607 pounds together as a team.
“He’s the big reader,” said his father, as Eli draws his teams’ names from iconic writer Mark Twain and his books.
Now 12, this was Eli’s first time showing at the Big E. Because he is part of the Cumberland County Brass Knobs Working Steer 4-H Club, not only was he entered to represent himself as a teamster, he was also representing Maine as part of a team with three other young teamsters. As a team, they earned a collective score for things like having the cleanest, neatest and best kept stall. His team earned second place for keeping their area clean and for answering questions asked by the public. They received a banner for having collected the most points overall from their blue, red and white ribbons.
As part of 4-H, Eli has learned public speaking skills to answer questions about his oxen, about how to work with them and how much they weigh, and to teach people about agriculture. Outside the show ring at the Big E, he was peppered with questions, and he fielded them left and right.
“In 4-H, he’s learned a lot – about the animals themselves, patience, a lot about the courses, how to teach the ox to sidestep, which is tricky, and how to hitch for the drag class,” said Rob Bartlett.
Using the Danish judging system, where the first three placing contestants are each given a blue ribbon, Eli won a blue ribbon for showmanship and a second place blue ribbon for the cart class. In the drag class, where his ox team pulled a stone boat, he placed fourth.
Eli’s father Rob also has experience with showing, as he had shown milking shorthorn cows in his youth. He owns the 400-acre Bartlett Farm in Salisbury, MA, and raises vegetables like zucchini, cucumbers and sweet corn that he sells wholesale and at their farmstand. The farm was established in 1659, making it one of the oldest family-run farms in America. Pumpkins are a mainstay. He also rents grazing land to cattle ranchers and sells horse hay – plus he owns and runs Bartlett Sawmill, sawing lumber for boats, such as the two Boston Tea Party ships, and rough-sawn pine lumber for building.