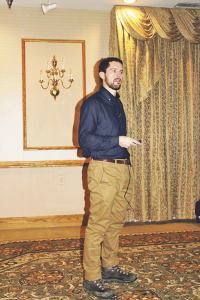 Brown said the weed’s leaves may look like pigweed (they’re from the same plant family) but waterhemp’s leaves are narrower than other pigweed types and they’re hairless. First spotted in New York in Seneca County, waterhemp has also been identified in Oneida, Wayne, Cayuga, Yates, Livingston, Genesee, Niagara and Orleans counties.

“We didn’t know what it would take to kill waterhemp,” Brown said.

“The more broad spectrum herbicides should have a greater rate at the end of the seasons, but before they go to seed,” Brown said.

Since waterhemp grows so quickly, he said applying herbicide when the weeds are no taller than six inches offers good results. In plots where herbicide was applied on waterhemp that was seven to 10 inches tall, it didn’t work as well.

“Next year, we want to see if we can get 100% control while reducing costs,” Brown said. “It’s a lot of money, but preventing it from going to seed is important.”

The seeds from waterhemp plants last three to four years, meaning that missed plants will only cause a more widespread problem.

He found Callisto applied pre-emergence, followed by Roundup PowerMax applied post-emergence but before interseeding, proved the best strategy for preventing spread of waterhemp.

“I looked at the field and said ‘Where are the weeds?’” he said. “They’d had quite a problem in previous years.”

He implicated combines as one means of spreading waterhemp. On average, combines have about 150 pounds of biomass left in them between fields.

Running woodchips through a combine may also help clean out any straggling weed seeds lingering in the equipment, including waterhemp seeds. Brown added that reducing tillage can also help prevent spreading waterhemp.

Farmers who raise animals should also take care to acquire clean bedding and feed. Farmers should use only clean seeds. Brown said a study in Utah indicated that 14% of wheat seed contained weed seed. Grower-saved seed in Australia showed 73% of wheat samples were contaminated.

Scouting for “escapees” is also important.

“Is everyone on your operation looking for waterhemp?” Brown asked. “Even hand weeding can help.”