Economics and strategies for getting cows pregnant 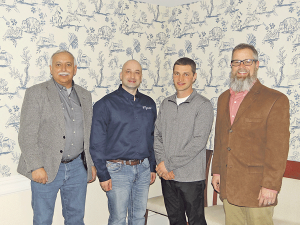 “For the typical dairy herd in the northeast, lowering the average DIM (Days in Milk) from 200 to 160 will result in around 10 lbs./cow/day more milk simply because you now have a fresher herd,” said CCE CNY Dairy, Livestock & Field Crops Area Dairy Management Specialist, Dave Balbian. “There’s a lot of economic advantage to getting these cows turned around in a hurry.”

This requires getting cows bred back sooner and getting heifers started sooner.

Dr. Lynch kicked off the program, advising attendees on financial impacts of implementing various programs. “If I’m spending $10 to make $5, it’s not a great investment strategy.”

“If we want to make more milk with the same number of cows. We only have two options. We can just take better care of them, feed them better and house them better and do all of the things we know that work, to raise those peaks and improve those lactation herds. The other thing we can do is move the front end of their lactation for more of their lifetime. Spend more lifetime days in the peak of the production of milk, in the higher production of milk, and fewer lifetime days on that tail-end, where they’re barely paying for themselves,” said Lynch.

Pregnancy rates and pregnancy risks were considered, with a focus on fertility and heat detection.

Heat detection is paramount. Breaking cycles up to 21 days, or a normal cycle, how many cows were successfully inseminated on your farm? For each cow missed, another 21 days of added feed and care must be realized.

An average, consistent, pregnancy rate of 30 percent on first service may be considered successful on most farms.

As preg-rates go up, so does milk per cow, per day.

“One rule of thumb is for every 1-point increase in your average preg-rate, you’ll get another $25 per cow, per year.”

How much will it cost to make that improvement? It is important to document all expenditures to make that determination — and Lynch cautions folks that these changes don’t show up in the milk tank over night, but may take about 18-months to get a return.

Servicing cows naturally with a bull, if done correctly, actually leads to more additional expense than timed A.I. strategies. Setting cows up with shots before sending them to the bull is beneficial. Bull testing, although not frequently done in the dairy industry, is an important step, as fertility can be an issue and by the time you discover that issue, more time and expenses are lost. Lynch figures to run a good bull program averages about $100 per-cow, per-year.

Another advantage of timed A.I. over running a farm bull is potentially improving genetics.

Lynch advises using both estrus detection and timed A.I. to achieve higher preg-rates. “If we are only doing timed A.I., we are missing cycles.”

Setting individual goals for your farm and having everyone on the same page matters.

Setting a voluntary wait period (VWP) gives you a base to begin on. Research led by Dr. Julio O. Giordano, Cornell, was shown and results were discussed.

A longer VWP in older lactating cows may be more advantageous due to sub-clinical endometritis or other factors causing low fertility and recovery from calving. However, the optimal VWP shifts from group to group.

Cows that don’t conceive on first service should be watched carefully and possibly added to a more advanced synchronized program. Consider culling cows who do not conceive after the third serving.

Once your herd reaches high efficiency, there is less need to hang on to replacement heifers. And although higher preg-rates mean more calves, Lynch said, “More calves mean more options.”

Kevin Ziemba spoke to attendees about breeding to Angus bulls and finding a better market for their calves.

“I think as the dairy industry becomes an industry with reduced margins for farms to remain in business it is important for them to adapt with the markets to gain any efficiencies we can,” remarked Ziemba. “Excess heifers on our farms, above our needs for herd replacements, are actually liabilities as it costs more to raise them than the value they bring.”

Currently, it costs about $2,000 to raise a dairy heifer to 23-months of age for first calving, while springing heifers are bringing about $1,300 — maybe.

Ziemba advises raising only the number of heifer replacements actually needed, while breeding for beef-cross calves to gain value and reduce heifer-raising costs. Beef-dairy cross calves are bringing more per-head on the market than beef, and certainly more than dairy calves, at this time, with $120/head or more for a beef-cross under 5 weeks old, and perhaps $50/head for dairy.

He emphasized that farms should think about raising 200 less heifers per year at the estimated raising average, and replacing that with 200 (or whatever number fits your heifer circumstances) marketable calves. This can bring real money to the table, while also reducing labor costs.

Ziemba says this would not flood the market with beef calves, but would only replace what is being used now, as Angus and Angus-cross calves are in demand.

Protocols, such as colostrum and health programs do apply.

Bull selection for calving ease and other traits should be considered.

Dr. Laudermilch spoke to attendees about safety and protocols for bull handling and maintenance. Every producer attending this presentation had experienced negative encounters with bulls, with two deaths in New York cited for 2018.

“This is certainly an issue in which farmers must use vigilance — and never let up their guard around these animals,” Laudermilch advised. “Adequate facilities and precautions must be in place, but unfortunately, many producers still continue in the way they’ve always done it.”

Farmers can visually interpret a bull’s body language through observation. Bull safety includes the use of a bull ring and halter and 8-10 foot rope or lead looped through and dragging behind or under the bull. This slows him down and allows for possible restraint. “This can be left in the bull at all times; he will still breed cows and eat/drink.”

Laudermilch also advises using a well-trained dog who can move the bull. These dogs can also provide a distraction and safety for bull handlers. “These dogs are well worth the investment.”

Balbian advised attendees on changes to the “Dairy Margin Coverage,” formerly known as the Margin Protection Program (MPP). “Herds with a base over 5 million pounds will be able to have separate coverage levels for that first 5 million pounds and then be able to select a different coverage level for any additional base production,” explained Balbian. “So, you could select $9.50 coverage for the first 5 million and then simply select catastrophic coverage for anything over 5 million, at possibly no cost. That’s our interpretation at this time. Final, detailed rules will be coming to the local FSA offices in the coming months, so keep your ears open.”