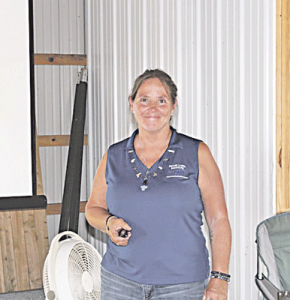 Invasive insect species can cause havoc on a farm because in many instances the pests have no natural predators. That’s why Patricia Wakefield-Brown, invasive species outreach for Hobart and William Smith Colleges in Geneva and volunteer coordinator with Finger Lakes Partnerships for Regional Invasive Species Management, presented on invasive species at the recent Empire Farm Days.

Wakefield-Brown defined an invasive species as “a species that is non-native or alien to the ecosystem and whose introduction causes or is likely to cause economic or environmental harm or harm to human health.”

She explained that the economic fallout extends beyond agriculture and may include recreation, wood or forest production, trade or shipping, tourism, utilities and management and control costs. These pests cause so many problems because they impact biodiversity, structural diversity, natural processes, aesthetics, ecosystem function and services. Their affect on human health is usually because of how invasive species impact soil, water, and air quality.

She cited the spotted lanternfly as an example.

“It’s affecting the grapes in Pennsylvania,” Wakefield-Brown said. “It has no natural enemies, a high rate of reproduction and is highly adaptable. It can out-compete natives, affect water and damage property.”

Wakefield-Brown said outdoor recreation such as hunting or using fishing boats represents a couple of the ways invasive species enter an area. Cleaning and drying equipment is important for preventing the spread of pests.

Farmers moving firewood, transporting goods or animals, or the natural movement of animals are a few other means invasive species move to new territory.

“If we can contain an introduction, maybe we contain its spread,” she said.

Sometimes, intentional releases end up going wrong when scientists don’t realize that what they think is a beneficial predatory insect turns into a pest since it has no natural predators itself.

Wakefield-Brown also mentioned the brown marmorated stinkbug as another example of an invasive pest.

“It feeds on a wide variety of host plants, including many fruits like apples, stone fruits and crops like beans, corn, tomatoes and soybeans,” Wakefield-Brown said. “Feeding on tree fruits such as apple results in a characteristic distortion referred to as ‘cat facing’ that renders the fruit unmarketable as a fresh product.”

For farmers depending upon the higher premium paid for fresh fruit, an infestation of stink bugs can devastate income. In addition, she said the bugs can cause an allergic reaction in some people.

On the positive side, stink bugs don’t damage structures or reproduce inside buildings, though they’re pesky to have indoors. Wakefield-Brown recommended sealing cracks in buildings to help keep them out.

The Asian long-horned beetle, a native of China, Japan and Korea, represents a pest that can destroy forest lots, as it bores through trees. Because its preferred host tree is sugar maples, “it has a huge potential impact to the maple syrup and hardwood industry,” Wakefield-Brown said. “The loss of these trees contributes to soil erosion.”

It takes affected trees seven to nine years to die.

Another tree pest, emerald ash borer, emerges in late spring to damage ash trees. Wakefield-Brown said to look for woodpecker activity, grown leaves near the crown of the tree, epicormic shoots sprouting around the tree base or trunk, and serpentine-shaped galleries from four to 20 inches under the bark. The pests make “D” shaped exit holes about 1/8-inch in diameter.

Wakefield-Brown also discussed the hemlock wooly adelgid, an aphid-like pest of hemlock trees. She said to look for masses about one-quarter the size of a cotton swab underneath the branches at the base of the needles, along with needle loss and dying branches.

For any invasive species, “early detection is important for rapid response,” Wakefield-Brown said.

She illustrated her point with a slide of the “Invasion Curve” which depicted the ideal time for intervention as when only a small number of insects in localized populations exist.

She encouraged farmers to note any new pests and seek identification of ones they don’t recognize. Wakefield-Brown noted that as time passes, insects rapidly increase in both distribution and abundance. That’s when it’s unlikely to eradicate an invasive species. That’s the point at which the public typically becomes aware of an invasive species. Once the pests have become widespread and abundant, management is more about population suppression and resource protection.

Partnerships for Regional Invasive Species Management (PRISMs) is a partnership of federal, state and non-government organizations along with citizens to plan and implement management of invasive species prevention and educate the public about the encroachment of invasive species. Hobart and William Smith Colleges represents one of eight PRISMs in New York, along with Cornell Cooperative Extension of Saratoga County, Buffalo State and more.