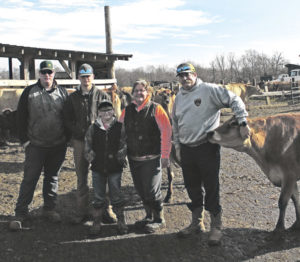 Amanda and her sister Nina were doing the milking for their parents, Ray and Linda Elmore. Amanda was taking a break because she had broken her leg and wasn’t as mobile as she usually was. That gave Matt the chance to spend some time talking to her.

“If I hadn’t broken my leg,” Amanda said, “I never would have talked to him.”

The pair married in May 2003. Somewhere along the way Amanda’s father said to Matt, “I hired you to haul manure, not stir it.”

Matt, for his part, said, “When I was 19 I helped a guy milk cows. When I quit I told myself I’d never milk cows. Look where that’s landed me. Never say never.”

Today, the dairy milks 200 Jerseys twice a day, with 99% of the herd registered. The largest number they have milked is 300, in a double-five herringbone parlor built in 1991.

Amanda is in charge of animal care and milking, while Matt does AI and the field work. Amanda’s nephew Carson McEvoy helps wherever needed, as does neighbor Alec Baldwin and the Bowmans’ son Bryson.

As for the Elmores, Amanda said, “Mom still does book work, and Dad’s still the boss.”

Even though the Bowmans would like to improve upon their 30-year-old parlor, they still appreciate its efficiency compared to what existed before: a barn where they milked two at a time. “That meant the milking of 50 cows was a five-hour-long process,” Amanda recalled.

In addition to selling fluid milk, the dairy also sells first-calf heifers. “A lot of them go to Puerto Rico,” Amanda said. “We’ve also sold them to Argentina, Brazil, Mexico, Ohio, Texas, California – all over the U.S.”

In addition to working on the farm, Matt works full-time at the Troutman Fire Department and is the deputy chief of the Harmony Volunteer Fire Department.

The tough economic reality for dairies in recent years has been discouraging for the Bowmans, but they keep going for their son Bryson, who loves farming, from daily chores to showing cattle.

“With better facilities we could be more efficient and profitable,” Matt said.

“It would be nice to have better facilities,” Amanda agreed, “but we still have the cows, and that’s good. Cows and family.”

“Trust in the Good Lord,” Amanda added, “and He’ll take care of you.”