Drones can help in scouting fields 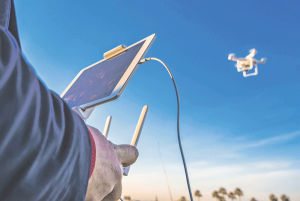 Walking the fields to look for issues with weeds, pests or disease can take inordinate amounts of time. Using technology to make this task easier can save farmers a lot of effort. That’s why Jarrod O. Miller, Extension agronomist, University of Delaware, recently presented “Drones as a Scouting Tool.”

Miller said aerial photos of crops aren’t new; however, using unmanned aerial vehicles (UAVs) or unmanned aerial systems (UASs) as the means to obtain photos and video is still fairly new. A UAV is just the drone; UAS refers to the drone, control hardware and the software. For simplicity, Miller used “drone,” the common term.

“If you’re flying for fun, just stay away from airports, but register your drone,” Miller said. “Scouting crops is commercial.”

For any commercial purpose, drone pilots need a remote pilot’s license, which requires a test. They need to fly in Class G airspace only during daylight hours and stay under 400 feet. The FAA has more regulations – and Miller cautioned the regulations change.

In addition to the type of drone pilot – hobbyist or commercial – the equipment itself varies. Consumer/prosumer drones include equipment that’s affordable and ranges in quality. Miller also said professional, commercial and industrial drones are the higher end models for engineering, surveying and agriculture. These are more expensive because of their features and durability. Some of these models allow owners to add on accessories to customize them for their needs.

“If you are doing it for a business, you have to prove it’s flight-worthy,” Miller said.

Among drone types, the rotary drone operates like a helicopter, with multiple propellers to take off and land. The quadcopter has four.

“They’re great for smaller fields and scouting,” Miller said. “They can hover in place, turn on a dime and are easier for getting started.”

Fixed wing drones work more like airplanes, with one propeller. The craft uses lift and drag to remain airborne, which means the craft has longer battery life. Fixed wing drones can fly up to 70 mph, which is efficient, but may not make it a good choice for maneuvering and scouting.

“If I want to map many acres, this is the drone to have,” Miller said. “But the faster they go, the harder it is to see. These are fun to fly and great for gathering videos. Most of the time, they’re pretty expensive.”

A hybrid drone takes off and lands like a quadcopter but flies like a fixed wing aircraft. Its cost is beginning to come down, but Miller said he still wouldn’t use this type of drone for field scouting.

A drone used for agricultural scouting will need a camera. Affordable cameras include visual or RGB (red-green-blue) cameras. More expensive cameras include thermal and multispectral models. The most expensive are LIDAR (light detection and ranging) and hyperspectral cameras. Hyperspectral cameras start at $20,000 and are usually used for research. Most farmers use visual cameras.

“You can add a camera to a drone, but that’s usually done with higher end cameras,” Miller said. “Many prosumer models come with a camera already.”

It may help to learn some basic photography skills, such as not facing the sun and paying attention to cloud placement since they can cast shadows on fields, which is important for farmers who are mapping. Many drone cameras’ software allows the pilot to adjust the shutter speed, aperture, ISO and white balance.

Or you can go with automatic modes, Miller said. “Watch some YouTube videos. There are also photographers that will help you.”

Multispectral cameras use multiple lenses, each of which has a filter to focus on a band or region of light. “Visual bands – red, green, blue – and NIR/Red Edge are common,” Miller said. That may be helpful for vegetation indexes like normalized different vegetation index (NDVI).

“NDVI is measuring different aspects of plants on the ground,” Miller said. “It doesn’t tell you what is wrong with the plant but that something is wrong. You don’t need it to scout.”

Multispectral cameras are useful for research, but you don’t need it for scouting a field. A visual camera works perfectly well, according to Miller.

Farmers who want to use different types of cameras may want a drone that doesn’t include a camera because pre-attached cameras can’t be swapped out.

Most drones with camera capability use gimbals for camera control. They allow farmers to move and aim the camera around the field and keep it steady when filming while flying.

“If you want to fly across a field, you need a screen,” Miller said. “It has to have a screen or connect to a phone or tablet.”

While it may seem sensible to use a smartphone, Miller said a tablet may make sense because of the size of the screen – “but if you’re in a field and you don’t have internet access, it might not bring up an image. Your phone will download the app, have internet all the time and it will connect with these devices.”

Above all, make sure the drone’s software is compatible with the device used.

Many of the controls are intuitive, especially for anyone who has played video games; however, since this is real life, pilots need to remember a few tips.

“Make sure you know when you hit Return to Home that you know the route so it doesn’t crash into a tree,” Miller said. Some drones may be piloted by just the software and a smartphone app, but Miller doesn’t recommend it because of its difficulty.

Before flying, pilots should understand the controls and practice flying short flights. “You don’t want to have the drone drop into a cornfield and then you have to figure out how to use it,” he said.

Automated, pre-planned flights allow a pilot to plan an entire flight through GPS technology; however, they’re typically not necessary for scouting. Miller said consumer drones, which are fairly small, may get farther away from pilots.

“These things are moving quickly. You might lose it,” he warned. With scouting, because you have a camera that’s sending a picture back to your phone, you may not keep a close eye on the drone. GPS tracking and a non-pilot helper may make it easier.

He advised farmers to purchase additional batteries so their field scouting isn’t cut short and as back-ups once a battery wears out.

Pilots should avoid flying in adverse weather conditions, including rain, wind and clouds.

Though drones can help farmers see there’s a problem, the equipment can’t diagnose it.

“They can see the problem, but the trained agronomist can help you figure out what’s wrong,” Miller said.

By flying the drone each week, a farmer can follow field conditions to help detect trends. One example is following soil and landscape patterns for future sampling. Farmers can tell where they have drought-prone soil and where they have excess moisture.

“Once you have canopy, you look at plant effects,” Miller said. “You can start to see patterns.”

Despite all the time saving advantages of using drones, Miller said old-fashioned field walking is still necessary; however, scouting with drones and using satellite maps can help farmers know where to spend more time physically inspecting a field.