Driving for the basics 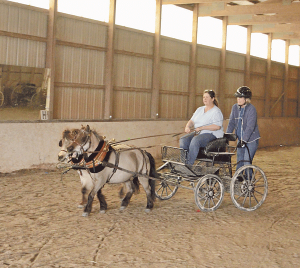 Eager to learn about driving, a group of women gathered at Grey Horse Stables in Gettysburg, PA, for a two-day clinic with Pam Kister, an accomplished trainer. But before they got their hands on harnesses, bridles and horses, the women learned about the seemingly endless choices for carts and carriages, and what to look for when purchasing second-hand equipment.

“A cart has two wheels, a carriage has four,” said Kister as she showed the group a variety of horse-drawn vehicles. “Look at the tires – are they pneumatic or metal? What are the shafts made of, and are they in good shape? Can you get in and out of the cart or carriage safely?”

Kister said in general, driving seems to attract older people, especially women. Some of the women she works with come from a riding background, had a traumatic experience and became more cautious. Others simply don’t want to ride anymore but still want to be around horses.

As with most endeavors, driving can become quite involved, but Kister said it’s like other equine endeavors – expensive or minimal, depending on how far the participant wants to go. Some aspects of driving make it more difficult than riding. “You can throw your saddle in a tack room or in a trailer and go,” she said. “With driving, the logistics (of moving a horse, cart or carriage and harness) are a little more difficult.”

Miniature horses are popular for driving, partly because they’re small and not as intimidating. Kister said although many minis are suitable driving, they aren’t necessarily the best choice for everyone. Minis that haven’t been handled correctly as youngsters or have physical issues that prohibit them from moving well aren’t good choices. And just like full-size horses, the occasional few have serious problems and can be dangerous. 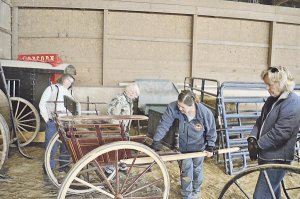 Kister is often contacted by those who own horses but neither the human nor the horse has any driving experience – and not every horse is willing to drive. “Prior to accepting a horse for training, I require a test for Lyme disease, a chiropractic exam and dental exam,” Kister said. “I want to make sure there aren’t any pain issues to deal with. A lot of horses are already desensitized because they’ve had a blanket put on. Some are more touchy under the tail, and that’s important because it’s where the crupper goes.”

There’s always a chance the horse really isn’t a candidate for driving, and Kister constantly assesses the horse’s actions during training to determine whether that may be an issue. “They let you know,” she said. “Just like every horse doesn’t want to be a barrel racer or be a trail horse. Some horses are more comfortable in a controlled situation. Let the horse tell you what they want to do. If they react too much to the cart or are too sensitive to what’s on their sides, they might not be safe.”

Once the horse is cleared of potential pain issues, Kister determines whether the horse can handle basic commands with long lining – left, right, stop. “I’d rather long line than longe because with long lining, I can control the horse’s body and provide support where they need it,” she said. “I can watch to see what I need to work on as we go along.” As a third level dressage rider, Kister looks for impulsion. “If I ask them to move, they have to move.”

Next, Kister will introduce the horse to a set of makeshift shafts to see how the horse responds, and then start dragging something noisy from behind. “Sometimes I’ll pony a horse behind a carriage,” she said. “It helps get them accustomed to the sounds. Some of them have sensory issues, and some horses see differently than others.”

Kister believes the most important part of training is setting up both the horse and driver for success, and fairness throughout training. But she also believes the horse will clearly indicate if driving isn’t for them. “If they’re too sensitive, you can’t force them,” she said. “I don’t like horses that are ‘dead’ or try to evade because they tend to be dangerous.”

For the clinic, Kister brought out several well-trained ponies for students’ first hands-on lesson in long-lining. This helps students learn what it feels like to control the horse from behind, and the difference between how long reins feel compared to the much shorter reins used with a riding bridle. With just a little practice and guidance, the women learned to drive several different ponies in a circle, reverse direction, navigate through cones and stay within a set of parallel poles. 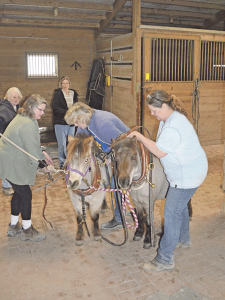 When it was time to sit in a carriage and take the reins, Kister brought out a mother-daughter pair of miniature horses – Bella and Windy – and guided her students through the harnessing and hitching process. When it was time to drive, she demonstrated first with the help of a student acting as the navigator, or gator, standing on the rear of the carriage to help balance it.

By the end of the two days, the women knew about crabs, swingletrees, the line of draft, the importance of fitting and placing a crupper properly and why the collar is placed over the horse’s head upside down. Each student successfully drove a pair of miniature horses.

In addition to driving clinics, Kister offers driving boot camp and individual lessons. She plans to offer another clinic in early summer.