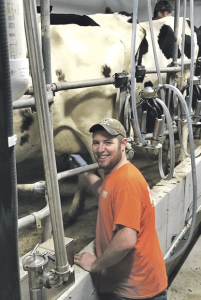 On Oct. 8, 1996, just hours after having his first and only son, Michael Roux Sr. kissed his wife goodbye and left the hospital to purchase his very first Milking Shorthorn from Kenny Goodwin of North Berwick, Maine. Since then, the Roux family has been writing their own story in the dairy business.

At age 4, Michael Roux Jr. joined his first club, the 4-Leaf Clover Club out of his hometown of Shapleigh, Maine. During his first year he studied swine. Over the next few years, he chose rabbits and cows as his 4-H subjects. A few later he joined the York County Beef Club to focus more on cattle. For approximately the next decade, he and his parents had a small hobby farm in Shapleigh, raising beef and dairy cows, chickens, pigs and goats. During these years, both his parents worked outside the home, but seeing their son’s love for agriculture they decided to dedicate all the time and resources they could to farming.

During Michael’s freshman year of high school, he joined the Brass Knobs 4-H Working Steer Club. He trained many pairs of oxen from only days old. He and his family traveled from fair to fair, where Michael showed his steers. He took first place many times, always excelling in the Working Class. He won awards at the Big E in West Springfield, MA, in 2012 and 2013, and at Fryeburg Fair, Maine’s largest fair, in 2013 and 2014. In 2015 he was awarded Acton Fair’s Overall Steer Herdsman.

As a senior in high school, Michael took a part-time job at Rocky Ledge Farm in Biddeford, owned by Ryan Girard. Ryan raises primarily Holsteins and has a shipping contact with Oakhurst Dairy. Ryan taught Michael the ropes of milking chores and for five days a week, after school, Michael did just that. During the next couple of years, Michael learned an extensive amount of knowledge from Ryan on all aspects of cows – from feed to forage, AI to miscarriages, helping a calf come into the world or a cow leave the world. During his time with Ryan, Michael quickly determined dairy cattle were his passion.

Michael graduated high school in 2014. A week later, he took a full-time job as a welder. For two years, he welded 40 hours a week and continued to work at Rocky Ledge Farm, but he knew he needed to think about the future if he was to someday milk full-time.

In late 2017, Michael had enough saved to start the dream of becoming a dairy farmer. He and his family began to clear land on a 50-acre lot they owned in Shapleigh. By 2018, with the help of his parents and two very dear friends, Kevin Clock and Daniel Shaw, Michael had a 40-by-60-foot barn, milk pit, milk parlor and house upstairs. Week by week, board by board, Michael’s dream was coming true.

Eventually the milk tank was installed. The time had come that Michael could save up to buy his own dairy cattle. As soon as Michael was ready for his own cows, he knew exactly where he was going to go: Conant Acres in Cantin, Maine. Along with his Holsteins, Michael purchased a few Milking Shorthorns and let family friend Danny St. Pierre house some of this Guernseys at the farm to increase the farm’s butterfat.

With the full system in place, and the cows purchased, the next step was to get licensed by Maine and find a hauler. In January 2019, Roux’s Farm became licensed to sell and produce whole milk. Hundreds of hours of hard work, labor, sweat and even tears brought Michael to where he wanted to be – a licensed dairy farmer.

Michael had accomplished what he set out to do, and then, within one month, it all changed – the market crashed. Although Roux’s Farm had been communicating with several different haulers during the years they were building, when it came down to signing up a new farm, no one was interested. At that time, some haulers were actually shutting off farms they had contracts with. Now, all of the work and dreams seemed to be crashing down. Determined to succeed, Michael started looking into selling raw milk.

Before they knew it, the Rouxs were bottling and selling their own milk. They started at a local bakery, and scheduled an open house with over 100 people attending. From there, Michael and his family started offering free samples and went town to town with their product. They looked for “Community Day” events and fairs throughout their community in which they could showcase their milk. By the end of 2019, Roux’s Farm’s Raw Milk was in 10 stores in York County.

Although Michael took a break from Rocky Ledge Farm to focus on his farm, he continued to work 50 hours a week welding. As 2020 began, Michael knew he had to diversify the farm if he was ever going to work it full-time. During the early months, the farm began raising pork and beef and selling wood on the side to subsidize farm expenses. Each weekend, Roux’s Farm would run a package deal, always including Roux’s Raw Milk to encourage customers to try it. They worked hard on educating people on raw milk and its benefits by hosting many Q&A sessions. Additionally, they offered other products like homemade mozzarella at their events. Roux’s Farm started selling chocolate, strawberry and coffee milk.

At the time of this writing, Michael just accepted a job at Dairy One. As this new chapter opens in Michael’s life, he is excited to be able to continue to thrive in agriculture.