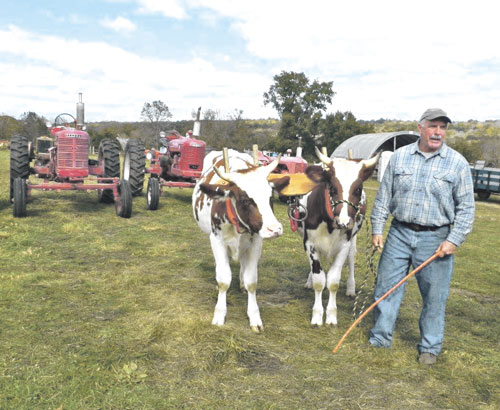 November arrived in Franklin, CT, on Sunday, Oct. 21 to set the tone for the autumn get-together of the Eastern Connecticut Draft Horse Association (ECDHA). The event was titled “Horses, Horsepower and Harvesting.” It took place on Blue Slope Farm on Blue Hill Road in Franklin. Owned and operated by Ernest and Sandra Staebner, the farm hosts a wide variety of events throughout the year, each emphasizing some aspect of southern New England’s rich agricultural heritage. One of the main attractions at Blue Slope is the farm museum located in one of the barns, featuring a large collection of agricultural artifacts which played important roles in farm operations in years gone by.

The ECDHA has a mission to educate the public in all things relating to draft horses, their many and varied uses both past and present, their care and management and ensuring they are maintained for future generations to use and enjoy. Those visiting the show were able to get up close and personal with both the horses and oxen that were brought by their owners to demonstrate their many attributes. For many it was a first time experience; for others it was something akin to stepping back to a time when they were younger and working with draft animals.

In addition to the draft animals, there was also a display of antique tractors. It was these tractors that signaled the end of the use of horses as a source of power on most farms. 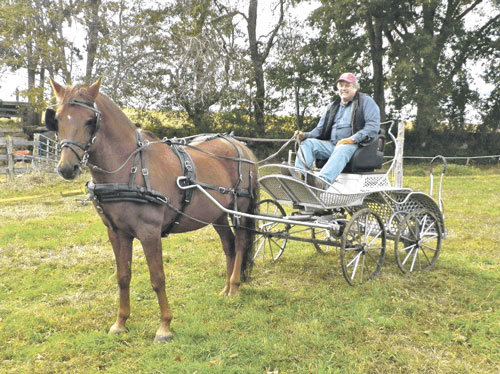 Teams of horses and oxen gave demonstrations when hitched to various pieces of equipment. Many implements in use today are modifications of those in use when horses were the primary source of power – they were adapted to meet the requirements brought on by the use of a different power source. On the other side of the equipment picture are machines that have been modified for using animal power. A hay tedder was attached to a forecart pulled by a team. One of the more interesting pieces was a stationary hay baler into which hay was pitched by hand. The power source for the plunger which compressed the hay was a piston which was moved by one horse power. The horse went around and around and the plunger moved forward when it hit a certain point.

An eight-year-old Morgan stallion belonging to Henry Tarryk was hitched to a carriage manufactured in Poland and has at least one particularly interesting feature. The shafts have been shortened, with the ends seated into the harness – the likelihood of any possible accident thus being greatly reduced.

The day was both entertaining and nostalgic. Various teams and singles did their assigned tasks in their typical fashion, moving at a pace compatible with the job at hand. It is hoped that some of the younger attendees might “catch the draft animal bug” and become involved at some level. It is only with the input of this group that this activity can continue. It should be strongly encouraged by those already involved.

All of the participants were enthusiastic and dedicated to this worthwhile cause. Without their input, the rural scene would be much the poorer.