Diversity – What’s best for soil and revenue at Barnyard Organics 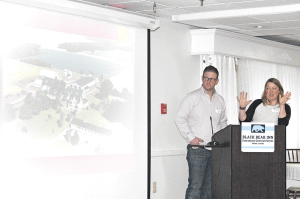 For fourth-generation farmers Mark and Sally Bernard, soil health is the primary concern in decision-making on their 550-acre organic farm in Freetown, Prince Edward Island, Canada. It is front-and-center in their values statement: “Barnyard Organics is a diversified, family-friendly, soil-focused farm with a priority on organic integrity from seed to feed and keeping products fair and accessible.”

“We put [soil-focused] in there as a reminder to cause us to take a second and ask ‘Is this a soil-builder?’ And if not, to reconsider,” said Sally. She added they use the statement as a guide in all of their decisions.

The Bernards recently gave a presentation on the evolution of their organic grain farm and feed mill at this year’s Maine Grain Conference, covering the farm’s transformation from a conventional potato farm into the diverse five-year rotation of organic grains, oilseeds and pulses it is today. They discussed how they’ve integrated several other value-added enterprises over the years, including a feed mill, custom seed cleaning, soybean roasting, an organic chickens and eggs CSA and a rent-a-chicken business.

When the couple, who met in ag college, began converting Mark’s family farm in 2004, they knew they wanted to get out of the potato market and developed a business plan for organic grains to feed a dairy market that was predicted to grow, with soybeans as their cash crop. While the dairy market didn’t quite take off as anticipated, through some trial and error the Bernards found a niche for themselves.

Grain production makes up a little over half the farm’s income. They mostly grow organic feed grain for their own mill, East Coast Organic Feed Mill, along with some organic Walton and Acadia wheat for New Brunswick’s Speerville Flour Mill. Some of the grain goes back into their farm to feed livestock.

“Our wheat journey has been interesting,” said Sally. Speerville came to them with a small bag of Acadia wheat they had stored in the freezer and asked them to grow it out. It did well and the little bag of seed they started with seven years ago now grows on about 50 acres as spring wheat.

About half of their time and 90% of their grain is devoted to their own feed mill, which they began in 2018. “We started making feed for others,” said Sally. “But it was getting to be a lot of labor and a time-suck. We needed 200 tons a year to justify a real mill, so that’s where we are now.”

They purchased an old mill they refurbished. “It was the long way around and a lot of work, but cheaper,” said Sally.

She noted that demand continues to climb for the poultry, turkey, hog, dairy goat and custom feed mixes they sell in 25-pound bags both on the farm and in almost 20 retailers in three Canadian provinces. Last year they sold 430 tons of feed and this year they have the potential to double that.

Sally grew up raising livestock and Mark has a crops background, so combining both livestock and crops was an easy choice, but the operation has morphed over the years to accommodate changing markets and the time needed to raise four children.

Sally has taken the lead on their livestock endeavors, which started with organic sheep – “but as we had more kids, the sheep got less attention.” They then moved to meat birds, scaling up after a few years and putting in an on-farm processing facility. Since the feed mill, they’ve scaled back the poultry, but Sally noted they can easily scale up again because they already have the setup and know the demand is there. They have a couple hundred meat birds this year along with their laying hens, and they do dairy and pork for themselves.

One enterprise that has taken off is renting out hens to backyard farmers who want fresh eggs for the summer without the hassle of tending to them year-round. They rent two chickens for $350. “We’ve sold out every year,” Sally said. She provides coops and feed, drops them off in May, picks them back up in October, and is available by phone to help troubleshoot.

She said the business probably had the highest profit margin on the farm and that the rental fee pays for the lifecycle of the hen. “It’s silly that on our 500-acre grain farm, rent-the-chicken is paying our bills,” she joked.

They also offer custom grain cleaning and soybean roasting, which isn’t a significant part of their income stream, but they do have regular local customers. They recently started offering grain drying, which has been nice insurance and has the potential for custom orders in a wet autumn.

They currently employ a five-year crop rotation. The first year they plant clover, then winter and spring wheat, then soybeans. The fourth year is barley and peas after a layer of manure and compost, and the final year they plant oats as a nurse crop and to under-seed the clover.

In developing their crop rotation, they took farm labor, the need to make money but not at the expense of the soil, building organic matter and fertility and diversity into consideration. A diverse rotation is important to confuse weeds and for soil health. They wanted to include legumes for fertility as well as deep-rooted crops, follow a heavy feeding crop like wheat and barley with a light feeding crop the second year, and grow the same annual crop only one year in a row. They advised the audience to consider the benefits of livestock grazing and are considering offering custom grazing.

“As we get a personal history with the soil and seeing the relationships on our farm, we’re not as reliant on soil testing,” said Mark, adding that it takes a lot of effort in planning and scheduling and there’s always trade-offs in deciding when to harvest and seed.