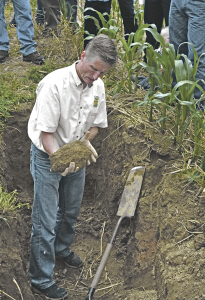 Spend some time with Dr. Sjoerd Duiker and you’ll have a new appreciation for the soil under your feet. Duiker, professor of soil management and applied soil physics at Penn State, said there’s a lot to learn from soil from a perspective that’s three feet deep.

“If you have cows, you feed the rumen,” said Duiker, comparing soil life to the ruminant gut. “We need to feed different things, not just one grain. Cows need energy, fiber and protein. Think about the soil as a rumen – we’re feeding bacteria, fungi and other organisms like nightcrawlers and amoebae.”

As Duiker stood in a soil pit in a field beneath a cover crop, he explained how amoebae and other microscopic organisms in the soil move along root surfaces. “The soil benefits from cover crops over time,” he said, explaining the benefits of crop residue. “It’s a gradual feeding, and gives the soil a long-haul feed. Having this roof, this protection, on top is important.”

Duiker explained about nightcrawlers, including the fact that they’re one of three classes of earthworms. “The worms important in agricultural soils are those that live in vertical burrows, and the most important one is the nightcrawler that makes open burrows that go deep into the soil.”

Although nearly everyone is familiar with nightcrawlers, Duiker has studied them extensively. “Straw and soil mixes inside the nightcrawler’s gut and it’s excreted by the nightcrawler,” said Duiker. “That’s where the little mounds come from. That soil has been shown to have higher aggregate stability, so it’s more crumbly – it has good tilth. It also has higher nutrient content than other soil because it’s like manure mixed with soil.”

Duiker said nightcrawlers don’t like to be crowded, and space their burrows about one foot apart. Considering the 43,560 square feet that comprise one acre, there’s potential for a lot of beneficial nightcrawlers in a growing area. He also noted nightcrawlers doesn’t push their way through the soil – they eat through soil. That doesn’t mean they like compacted soil; they’re just doing what nature dictates. Holes created by nightcrawlers are usually darker than the soil due to additional organic matter they contribute to.

Earthworms that live in the soil horizon (the top six inches of soil) move horizontally. Their food preference is organic matter such as roots in the soil, although Duiker said he has seen earthworms consume food that nightcrawlers bring underground. “I often see them congregate around nightcrawler burrows,” he said. “They put their casts, the mixture of organic matter and soil from their gut that nightcrawlers put on top of the ground, inside their burrows. That also helps improve the soil. Earthworms don’t like crop residue that’s incorporated. They need crop residue on top.”

After explaining the role of crop residue and earthworms in regard to soil health, Duiker pointed out numerous holes where nightcrawlers had made their way through the soil, and in the process moved partially decomposed crop residue downward. “Nightcrawlers come out of their burrows at night and pull straw through the burrow and partially inside,” he said. “It takes some time for the straw to rot, and it depends on fungi and bacteria to help decompose the straw. When it becomes soggy, the nightcrawler can eat it.”

While nightcrawlers’ burrows contribute significantly to soil porosity, they aren’t the only ones that dig deep. Plant roots, especially taproots, contribute to porosity. Desirable plants such as alfalfa have taproots reaching downward, often growing through nightcrawler burrows.

Earthworms can penetrate compacted soil as defined by a penetrometer. “In the red zone, at about 300 pounds per square inch, we don’t get root growth,” said Duiker. “Earthworms can’t exert that much pressure.” Duiker discussed a penetration resistance study in subsoils and found that in zones higher than 300 psi, roots shouldn’t have grown. However, roots were present by means of biopores created primarily by nightcrawlers and fissures in the soil.

Although the nitrogen-fixing nodules on alfalfa roots are small, Duiker explained that when beneficial bacteria infect the root, the roots form small balls that don’t allow oxygen in. “Inside is where microbes convert nitrogen from the air to nitrogen the plant can use,” he said. “Our air contains 80% nitrogen, but it’s in a form plants can’t use – but microbes can use it.”

Fungi are often thought of as undesirable, but soil fungi are beneficial. “Fungi that live in association with the roots are mycorrhizae,” said Duiker. “Mycorrhizae are multicellular and form large filaments, or fungal hairs. These mycorrhizae grow inside the root of the living plant and take some energy from the plant. In exchange, there are certain nutrients in the soil that are immobile, and they access water so they can increase the volume the plant can use. There is some indication that we damage the mycorrhizae and other fungi when we till the soil.”

Various fungi aid in the decomposition of organic matter. One example is the breakdown of rye straw residue from a cover crop. “Fungi break down lignin,” said Duiker. “Bacteria are not good at that, so we need fungi.” Bacteria also have a role in soil health. Certain compounds, such as polysaccharides exuded by bacteria, act as glues that contribute to soil tilth.

The fruiting bodies of fungi are mushrooms, often seen in fields, and the underground portions of mushrooms create a large network of fungi that help with decomposition. “They’re important for nutrient cycling,” Duiker said. “They liberate nutrients and form nets underground that help with aggregation. We want soil to be crumbly, and the fungi nets around soil particles help hold soil together loosely.”

The relationship between nightcrawlers and taproots is symbiotic, and both contribute to soil tilth and fertility. Although the alfalfa roots in Duiker’s soil pit were three feet deep, many go deeper. Fibrous roots of orchard grass and corn tend to be shallower, but still play an important role closer to the surface. A combination of roots and various earthworms perform significant work, mostly unseen, which enhances soil biota, increases soil health and provides more fertile soil for farming.