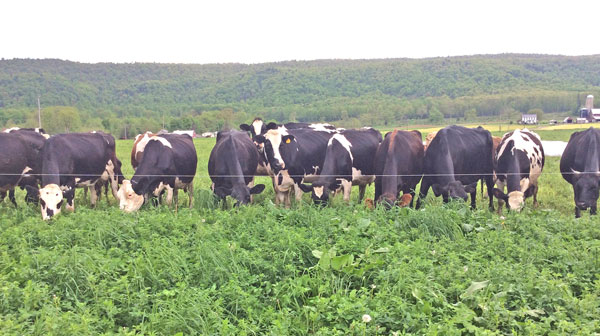 Penn State Extension’s Dairy Team has launched a podcast, “Bovine Banter,” where diverse dairy farmers and experts discuss a wide array of topics and provide an inside look at their farms, their experiences and lessons learned. These discussions have recently included interviews with two dairy farmers who utilize grazing on their PA dairies.

While both operations incorporate seasonal grazing in their dairy business model, their approach to grazing, and the way they’ve designed their grazing models, are different. One of the farms is a 300-milking head conventional dairy growing their own corn silage, hay and some spelt, feeding a total mixed ration. The other is a 75-milking head, certified organic, grass-fed dairy shipping under Organic Valley’s Grassmilk label, relying only on pasture forages and purchased certified organic baleage to make milk.

John Vanderstappen, along with his wife and their adult son, milk 300 registered Jersey cows, with 50 dry cows and 400 young stock. Their 140 acres of northwestern PA pasture supports seasonal grazing for the herd. Grass is a supplement to the corn silage-based total mixed ration, fed year-round. About 30 – 40 pounds of corn silage are fed daily depending on pasture forage quality. When not out grazing, the milking herd is housed in a free-stall barn.

The Vanderstappens originally grazed because they didn’t have the infrastructure to grow crops and house cows. They had fewer cows then, and enough acreage to allow more intensive grazing. They were purchasing feed to supplement the pasture.

“Grazing worked really well for me then,” Vanderstappen said. However, as the herd grew and he began growing his own feed crops, the available pasture wasn’t enough to play a primary role in the herd’s diet. Now growing 270 acres of corn, with 150 acres utilized for silage and most of the rest as shelled corn, the cows are fed a diet primarily of corn silage, along with some hay, from November through May 1.

Vanderstappen saw the benefits of grazing and wanted to keep the cows on grass as much as possible as the dairy operation grew. The biggest advantage is cow health, with increased mobility, decreased foot problems and lameness.

The pastures are perimeter fenced with a single strand high-tensile fence and broken up primarily into two-acre paddocks using fence tape. Pastures are divided by a road, which makes crossing the growing herd over to graze a labor-intensive chore.

The cows are broken up into three or four groups in the barn, and they graze in these groups as well. Cows are moved to fresh paddocks every day or every other day, depending on pasture conditions, in a “modified grazing system,” Vanderstappen said. Water is provided via underground pressurized lines that empty into 150-gallon troughs, shared between two paddocks. “It’s enough water. It’s not extra water,” he said. If water is limited, the cows will knock over the troughs.

He’s added tile drainage to his pastures to enhance soil health and keep the ground from being too wet to graze. The tiles have allowed him to graze even in wet weather and enhance forage growth. He also fertilizes two or three times per season with urea, which has doubled the amount of forages on the pastures, and limes the pastures routinely.

The cows graze differently depending on the season. The pastures (which are primarily orchardgrass) also contain Festulolium, bluegrass, Ladino clover and a bit of ryegrass. Starting in May, cows spend four hours on pasture. By June 25, the cows graze an hour longer. Once the weather becomes too hot, the cows prefer the barn and are led out to pastures overnight instead, grazing from after the evening milking until the morning milking.

Vanderstappen said he does see some decrease in milk when turning the cows onto pasture, where the cows replace about 30% of their feed with grazing. They are still fed their TMR in the barn year-round. The fed diet is constantly changing, depending on the quality and quantity of pasture available. The nutritionist adjusts the fed ration to reflect what the cows are consuming on pasture.

The cows “are making up the difference in the barn,” Vanderstappen said. “We’re constantly adjusting what we feed in the barn.”

Alvin and Marianne Peachy of Saddlers Run Farm in Allensville, PA, have been certified organic since they began shipping milk in 2010. Organic standards require 30% DMI from pasture and a minimum of 120 grazing days per year, depending on the length of the grazing season.

Their path to dairy grazing began with a 15-day rotation period, grazing grasses at six inches in height and removing cows when the grass was grazed down to two inches. But that is no longer an option. Instead, they practice tall grass grazing, with a recovery period of 35 – 40 days. This type of management intensive grazing has allowed the soil health to increase, the forages to be more nutritious and the cows to thrive on an all-grass diet.

The trampling of the forages that occurs with tall grass grazing allows organic matter to build in the soil and prevent soil erosion. Keeping the soil covered also reduces the need to seed pastures while keeping the stand healthy and thriving.

The herd is a diverse mix of crossbred Jersey, Holstein and some Swedish Red. The pastures are primarily a perennial grass mix, but some pastures are planted to tall fescue, which can withstand wet conditions and provide the first spring and last autumn grazing. Pure alfalfa fields allow a hedge against drought. This cuts the risk, Peachy said, so that no matter the weather conditions, the animals have pasture to graze.

Field perimeters are permanently fenced, with temporary electric fencing used to create paddocks. Having good laneways to get the cows into paddocks is important for the cows and the soils.

Cows are moved twice per day, after each milking. They graze from April 10 until late November. If there isn’t enough time for pastures to rest, the cows are fed supplemental baleage rather than risk grazing a pasture too soon. The DMI from pasture is 100% during the height of the grazing season. The cows are fed baleage beginning in August, when 70% of DMI is from pasture. Beginning in late November, the herd is fed stored baleage exclusively.

The Peachys do not produce any of their own baleage, utilizing all of the dairy’s acreage for grazing. The stored feed is purchased primarily from “hay-in-a-day” operations to optimize sugars and fed on an outdoor concrete pad.

Peachy has no equipment costs, and needs no labor to haul feed to the animals or spread manure on the fields. Allowing the cows to feed themselves and provide fertility as they rotate through the paddocks has reduced his input costs.

Milk production per cow did decrease with the change to 100% grass-fed. However, the Peachys increased the number of cows in the milking herd in order to maintain previous milk production level without increasing costs of production. Overall operating costs have been lowered by going grass-fed and not growing feed crops, and the dairy is averaging $13 – $14/cwt. of milk for 2021.

Whether grazing is incorporated as a supplemental strategy on a conventional farm or is the primary strategy on a grass-fed dairy, it can enhance cow health, improve soil fertility, help to reduce labor needs and may reduce overall costs of production. Both farmers agreed that dairy farmers of all types have nothing to lose by starting a grazing program. A desire to learn is all that is required.

“If land is available…just try it,” Vanderstappen said, and find a system that works for you. “Everybody is different.”