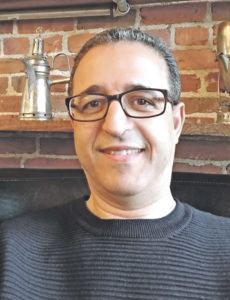 “Mitigating methane from ruminants is a hot topic because it’s part of the conversation about climate change,” Benchaar said.

“Methane is mainly from enteric fermentation and manure management, and carbon dioxide emission from fossil fuel use,” Benchaar said.

“Dairy and beef are the main contributors to emissions,” he said. Raising beef cattle represents 35% of global GHGs by species, followed by dairy cattle at 30%. “Pigs, buffalo, chickens and small ruminants are much smaller contributors,” he added.

Benchaar said ruminant animals are important for food security. “The ruminant animal has the unique ability to efficiently convert the forages from grasslands into high-quality animal products,” he said. Ruminants represent 51% of all sources of protein from the livestock sector, with 33% of that as meat and 67% as milk. Cattle provide 81% of protein sources of ruminants, buffalo 11%, sheep 5% and goats 4%.

“For many populations, livestock is a primary source of nutrition, not just of calories,” Benchaar said.

Methane emission from cattle are 90% from enteric fermentation and 10% from manure storage. More than an environmental concern, “methane production means loss of productive energy,” Benchaar said. “In general, in ruminants between 2% and 23% of gross energy intake is lost to methane.”

In dairy cows on a forage-based diet, it’s 4% to 7% gross energy intake lost and in feedlot cattle on a high grain diet, 3% to 4%.

Methane production happens in the rumen. Carbohydrates in the feed start the process, as they go into the rumen and are broken down into volatile fatty acids – sources of energy, CO2 and hydrogen. Methane is formed as a reaction among these outputs.

Each day, lactating dairy cows emit 700 liters of methane, followed by dry cows on hay (200 liters), beef cattle (100 to 200 liters) and sheep (50 liters). In dairy cows, 87% of the methane produced is from the cow’s rumen and 13% is from the hindgut. The release of enteric methane is only 1% through the rectum. “Methane is not released through flatulence,” Benchaar said.

The mouth and nostrils release 99% of enteric methane. Enteric methane represents 50% of the carbon footprint. Mitigating enteric methane production from dairy cows can both reduce a potent GHG and loss of energy to animals.

“It has both long-term environmental and short-term economic benefits,” Benchaar said. “It also represents a loss of energy to the animal so it is a nutritional issue.”

Approaches to reduce GHG intensity of milk production are measured by the carbon produced per kilogram of milk. Benchaar said that research from 155 countries indicates reducing GHGs in dairying can also enhance animal productivity, as obtaining more nutrition from their feed can increase the amount of milk given per animal.

“As milk production increases, methane emission increases but it’s not a 1:1 relationship,” Benchaar said. “As the production of milk increases, the greenhouse gases per kilogram of milk decreases. With low productivity systems, the emission intensity is high. Therefore, the focus needs to be on increasing animal productivity, better nutrition, genetics, health and management.”

Research also indicates that enteric methane increases as dry matter intake increases. A high forage diet fed to beeves appeared to reduce methane emissions by 60%; however, “this is not consistent,” Benchaar said. That finding is also “not consistent with the role of ruminants of converting fibrous feeds to edible products, milk and meat.”

“It has been demonstrated that feeding legumes versus grass produces less methane,” Benchaar said.

Their lower fiber content and higher passage rates from the rumen means less methane per the amount of milk or meat the animals produce. Benchaar cautioned that plant maturity at harvest can affect this.

Enhancing forage quality “is not easy to achieve,” he added. “For example, harvesting at optimal stage or early maturity means higher dry matter intake and digestibility and less methane.”

Lipids also affect methane production, including “reduction of the amount of organic matter fermented in the rumen,” Benchaar said. This is because fat is replacing carbs.

Benchaar said lipids decrease the extent of organic matter (fiber) fermentation in the rumen via toxic effects on ciliate protozoa and methanogens and to a lesser extent, through the biohydrogenation of unsaturated fatty acids. Researchers found a 5.6% reduction of methane with each 1% addition of supplemental fat to dry matter.

Replacing alfalfa with corn silage reduces methane in stored manure by up to 10%; adding fat such as linseed oil can offer up to 25% reduction. These changes take place because of depressed fiber degredation and increased volatile solids in manure.

“It’s not all about methane only,” Benchaar said. “It is important to conduct a whole farm lifecycle assessment.”

He also spoke about adding canola meal instead of soybean meal to improve efficiency and sustainability to a dairy farm based on his recnet research. “Canola meal shifts nitrogen excretion from urine to feces, which means less potential emissions of ammonia and nitrogen,” Benchaar said.

“Further studies are needed but through the studies, using canola meal rather than soybean meal in the diet of lactating dairy cows can be a greenhouse gas mitigation strategy, depending upon where it is produced,” Benchaar said. “Globally, the carbon footprint is lower with canola meal.”