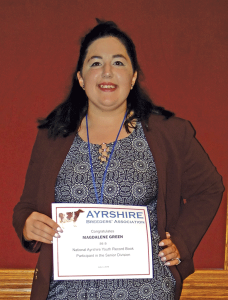 It’s not easy competing at the national level in showing dairy cows and Magdalene Green, of Hagerstown, MD, also known as “Maggie,” has shown a great deal of determination in pursuing her interest, especially after starting out at an older age than a lot of other young folks.

“I had never worked with cows until I started feeding calves eight years ago,” explained Maggie. “Before that I had only handled goats – and only for about two years.”

Maggie said she had grown up in town, moving to farm life when she was 10, and didn’t begin showing until she was 14 and began feeding calves at Palmyra Farm. “I got involved with Ayrshires when I started working there,” she said.

Maggie has been involved in 4-H for 10 years, beginning her agricultural life with dairy goats and serving on the Maryland State 4-H council. She is currently a certified 4-H volunteer. But her learning experience does not end there.

A former FFA member, Maggie is also the outgoing Alternate Dairy Princess for the state of Maryland and was Miss Washington County for 2017-18 with Maryland Farm Bureau.

“I visited schools and libraries teaching children about agriculture, making healthy choices and focusing on buying local. I did this in conjunction with the county’s Ag Literacy Trailer, a trailer that visits various places in order to educate children on ag. I also attended livestock shows and gave tours of farms,” she explained.

She held the positions of Washington County Princess and Maryland State Alternate Princess at the same time.

“As Princess I went to schools and taught lessons on dairy, I went to shows to give out ribbons, went to consumer events like ‘Breakfast on the Farm,’ where we served local food and gave tours to help educate people that are distanced from agriculture,” she reported. “I also gave various tours of Palmyra Farm to groups of people, such as an adult daycare facility, Brownie Girl Scouts and a group of visiting Slovakian students.”

Maggie continues to work at Palmyra Farm while attending Potomac State College for animal science and nutrition and pre-veterinarian science.

“On the farm I mainly feed calves. I also milk cows, run equipment and practically anything else,” said Maggie. “I am in charge of breaking heifers to lead and working with lease kids” – the youngsters who lease heifers and calves from Palmyra Farm to show at county fairs and the state fair.

“I help them halter break their calves and practice for the shows and make sure they are prepared to show to the best of their ability. At the fairs I also help them take care of the heifers and get them ready to go into the ring. It’s a lot of fun to see these girls get better and better every year,” she said. 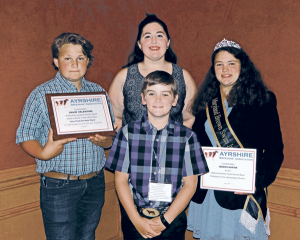 “This was the first time I had shown at a national level,” she said. “It was an amazing experience!”

Ruann is the daughter of the World Dairy Expo two-time Grand Champion Ayrshire Palmyra Berkely Ruth. “It is such an honor and privilege to show a daughter out of the legendary cow,” Maggie remarked.

Maggie said she plans to either go to veterinarian school or start a career in ag education. “I am still not sure exactly which path I want to take, but I know I want to work in my community in Washington County,” she said. “Through all of this I want to continue farming my family farm, raising meat rabbits and goats and working to having a strong show line in both species. I would love to be able to stay involved with Ayrshires.”

Maggie said she plans to continue leasing and showing Ayrshires as a junior and hopes to continue beyond, possibly, eventually, purchasing her own Ayrshires.

“I have had to work very hard to catch up to the other showmen who have been showing almost all their lives,” said Maggie. “But I am very happy with how far I have come.”