Determination, perseverance and help from friends: The formula for Derrick Austin’s path to full-time farming 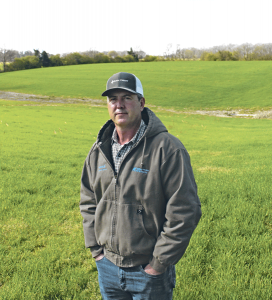 OLIVE BRANCH, NC – “I would be drilling wheat until one, two in the morning,” said Derrick Austin, “freezing my tail off. Then get up and go to my grading job. It was the start of where I’m at now. If it hadn’t been for those late nights then I wouldn’t be where I am now.”

Austin is a grain farmer in this agricultural region about an hour east of Charlotte. He has been a full-time farmer for the past five years, but he is who he is today because for 20 years he worked a day job while farming for himself at night.

First it was 15 years of grading, the career he pursued after graduating from the Ag Institute at NC State. His family had some land, but not enough to support a man (much less a family) as a full-time farmer.

So during the days he would do his part in helping Charlotte grow, then come home in the evenings (and nights) to work the 100 acres his family let him farm. During summers and on weekends while at NC State, he would come home to work at local area farms, so he had some buddies would who let him use their equipment, such as a grain drill.

During his early years, Austin would hire out the harvesting, but eventually he was able to buy a JD 7720 combine.

Austin grew his farming operation to where he was working full-time in Charlotte and farming 240 acres on side. “I was just working all the time,” he said.

When the economy crashed in 2008 and it got slow at Austin’s Charlotte job, “after a lot of thought and prayer” he left his grading job and came home to work in Union County, spending his days helping the farmers he had worked for during college.

For five years he kept up his dual-job pace, working for his neighbors during the day and spending evenings farming for himself.

“When you’re by yourself it’s a lot of walking, going back and forth between pieces of equipment,” he remembered. “I would call people and ask ‘Can you help me get my tractor and combine moved?’ I’m just really blessed with folks helping me out throughout the years.”

One of the main people who helped him was his father-in-law, John Black.

“When I was starting out, having my dad-in-law help was huge,” Austin said.

Derrick, his wife Emily, their son Krew and their daughter Baxley live in what used to be Austin’s grandparents’ home. Austin grew up next door, and got the farming bug from his grandfather, who was a small-scale farmer.

“I would drive my grandfather’s Farmall tractor,” Austin said. “Just getting in the dirt. I thought it was the best thing.”

The five years Austin worked for neighboring farmers corresponded to the commodity boom, so he was able to buy his first new piece of equipment, a Kinze planter. He also built an equipment shed, and grew the amount of land he rented to 500 acres. In 2013 Austin left the dual-job pace and started farming for himself.

“It was a huge decision for him to make but it was his dream and I’m glad to see that he is fulfilling it,” Emily said. “He’s definitely worked hard.”

“Everything fell into place,” Austin said. “Emily’s been a big, big help around here. Helping me move, putting up with me working long hours – she used to be about a single mom.”

Today Austin dry farms 900 acres of corn, wheat and soybeans. Though commodity prices have dropped and the weather hasn’t been cooperative – last summer his area suffered a drought and then in the autumn it “started raining and didn’t stop,” meaning Austin was only able to plant 80 of 400 acres of wheat – he has persevered.

“When you’re a first generation you’ve got to distinguish between needs and wants,” he said. “I’ve got GPS on my sprayer today. One day I will get a tractor with autosteer.”

Today Austin uses a 1992 JD 9600 combine. He also this winter purchased scales and a grain dryer. The dryer will help him “not be so stressed out about trying to put wheat back on.”

Austin grows milling-quality wheat, which he sells to Renwood Mills in Newton, NC.

Because the area is home to many poultry operations, Austin is able to use poultry litter for nutrients.

Austin has had a full-time helper, Clint Philemon, for two years.