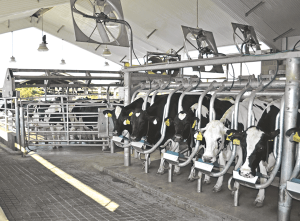 Summer might be winding down, but there’s still plenty of hot weather ahead. Alycia Drwencke, Southwest New York Dairy, Livestock and Field Crops program, said that for four months of the year, the average temperature in New York State is 70º or higher, and that spells heat stress for dairy cattle.

“Heat typically becomes a problem for lactating cows around THI of 68,” said Drwencke. “THI takes into account temperature and relative humidity, and the compounding effects of those on cows.” Individual variances influence cows’ ability to handle heat, and factors other than THI should be included when assessing heat stress. Cows experiencing heat stress produce less milk, have less lying time and lower dry matter intake. Heat stress can affect all ages and classes of animals.

“Cows need to maintain their body temperature within a certain range in order to perform bodily functions,” said Drwencke. “To do this, they have to balance the heat they gain from the environment by releasing excess body heat. They often show a progression of mechanisms to release excess body heat and also to avoid gaining additional body heat.”

A cow’s normal body temperature of 100.4º – 103º will rise as temperatures increase, and cows’ first response to heat is to seek shade. Cows often begin to sweat, which releases excess body heat through evaporation. Cows also release heat by breathing faster, which releases heat by means of the respiratory tract. Drwencke said a respiration rate above 60 – 80 breaths/minute is considered elevated.

Rumination produces more body heat, so overheated cows eat less. Look for early indications that cows are too hot and take steps to relieve them. One early indicator that’s easy to evaluate is increased respiration rate.

“Cows will also pant,” said Drwencke. “If they’re panting, they’re exhibiting a respiration rate of about 90 breaths per minute. Panting is a telltale sign they’re having difficulty coping with heat load.” Panting cows will drool, breathe with their mouths open and often have their tongues out.

Drwencke advised using a cow-focused heat audit, which assesses respiration rate and body temperature. To measure respiration rate, count flank movements. “One full breath is an in and out movement,” said Drwencke. “Make sure to count in and out as one breath.” Normal respiration is 40 breaths/minute or lower; elevated respiration is greater than 60 breaths/minute. Drwencke suggested spending a short time observing the cow prior to counting to pick up the rhythm. Because rumination produces drooling, cows that are drooling but not eating or ruminating are likely experiencing heat stress.

“Water is a highly effective form of cooling,” said Drwencke. “In a study, cows were given access to sprinklers 24 hours a day, every day. Cows will choose to use sprinklers between about 9 a.m. and 6 p.m.” The research showed that if cows had access to soakers and sprinklers as well as shade, by using sprinklers starting early in the day, cows’ body temperatures stayed within normal range.

Transition cows that aren’t cooled in hot weather may experience metabolic issues such as displaced abomasums, ketosis or milk fever, and may be difficult to settle at breeding. The colostrum of cows not adequately cooled during the dry period is lower in quantity and quality. Quaassdorff said new research shows heat stress impairs mammary gland turnover, which affects secretory activity and productivity in the next lactation.

The obvious solution is to cool dry cows with fans, sprinklers and misters. Quaassdorff said with water, it’s important to soak cows to the skin for adequate cooling. “When you add fans as well as soakers, you get the best benefits of evaporative cooling,” she said. Water dripping in front of fans cools the air surrounding cows, which lowers body temperature.

Calves in utero are also affected by heat stress, primarily due to impaired placental function. “Blood flows away from the core to the extremities in a heat stress event, and nutrients go with it,” said Quaassdorff. “The calf doesn’t develop as it should, which might lead to reduced calf birthweight and growth rate.” Quaassdorff referenced a study showing lower birth weights in calves from dams that were not cooled during the dry period. The same calves had poor immunity due to poor IgG absorption from colostrum. Calves from heat-stressed dams have a higher rate of failure of passive immune transfer, which is related to premature gut closure.

The calves of heat-stressed dams have lower survivability and greater chance of sickness in the first year of life, and if retained in the herd, have lower future milk production and shorter time in the herd. “One study shows that heifers born from dams that were not cooled during their dry period produced 11 pounds less milk per day in the first 35 weeks of lactation compared to peers from cooled cows,” said Quaassdorff. “Some of these animals have altered metabolism – they store energy (glucose) as fat versus putting that into production and reproductive performance.”

As calves begin to consume grain, rumen development generates heat. Calves over three weeks of age have lower heat tolerance and should be closely monitored when the THI reaches 65 – 69 and higher.

“Get your team on board,” said Quaassdorff. “Anybody who is responsible for raising calves should be trained to recognize calves that are not coping well with heat stress.” Increased respiration, panting and drooling, reduced feed intake, depressed appearance and decreased activity are sure signs that calves are not coping well with heat – even in September and October.