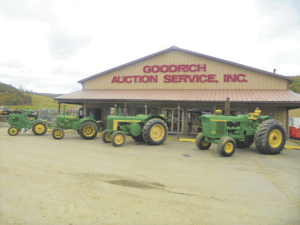 Tractor aficionados had the opportunity to bid on a variety of models from the collection of a lifetime. Phil Card’s lifetime, to be exact.

Card, of Endicott, NY, best known throughout that town as the founder of Phil’s Chicken House, has spent over 40 years acquiring over 40 tractors produced over a period of 40 years. Thirty-five of Card’s tractors were auctioned off last month by Goodrich Auction Service, located at 7166 Route 38 in Newark Valley, NY. The tractors dated from 1930 to the 1970s.

Card’s love affair with these mechanical workhorses of farms the world over began as a boy. “I remember my parents on tractors,” he said. “It’s a part of my history.” That family history is evident when asked what his very favorite tractor is. “That’d have to be the 1952 John Deere Model A. It was the last one my dad had.”

Over the years, Card found himself drawn to tractors that “were different from the ones I had ever seen before. The less common ones…those were the ones I really wanted. I looked for tractors that couldn’t be found in this area.”

While many of his tractors could easily be mistaken for museum pieces, Card insists that every one is fully operational, and he hopes that whoever purchases them puts them to work. “I’d be disappointed if a good two-thirds of them weren’t used by their new owners. They’re wonderful machines. The other third, well, I can understand if they end up being used just as show pieces.”

Card himself used his tractors not just for work but also for charity. Until very recently he served as president of the Southern Tier Antique Tractor Club. He and his fellow 70 members have ridden their tractors in food drives benefitting local food banks.

Now that he has turned 80, Card decided to downsize. “I guess I’m in the fourth quarter of my life,” he laughed, “so I’m going to slow down a bit and keep just seven of my tractors. That’ll probably be enough to keep me busy.” Card hopes the tractors bring as much happiness to their new owners as they have to him. 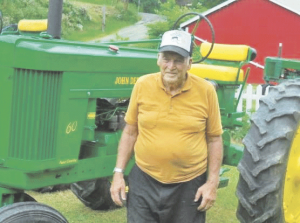 Evan Goodrich, of Goodrich Auction Service, expected a substantial turnout for the auction. “This is a large collection, with some really nice pieces. Anyone would be proud to take one of Phil’s tractors home,” he said.