Dairying for tomorrow at Dutch Hollow 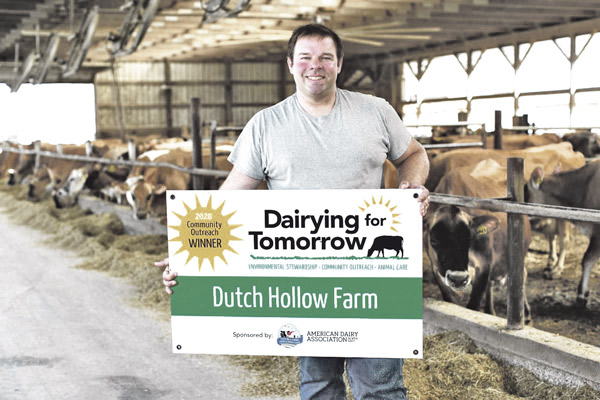 That sentiment is what drives the Chittenden family’s community outreach at Dutch Hollow Farm in Schodack Landing, NY. Those efforts were recently recognized by the American Dairy Association North East (ADANE) with its Dairying for Tomorrow’s 2020 Community Outreach Award.

The Dairying for Tomorrow Awards were established to recognize local dairy farmers and showcase the unique actions they take on and off the farm to help sustain and improve the dairy industry. ADANE commended Dutch Hollow for “its outstanding community relations initiatives that help build strong relationships and foster transparency between farmers and their neighbors.”

Founded by third generation dairyman Paul Chittenden in 1976, Dutch Hollow is today run by his children. Nate and Alan studied animal science at Cornell; Brian graduated from the SUNY College of Agriculture and Technology. After completing her coursework at Cornell, their sister Karin relocated and runs her own farm in Australia.

“It’s very much a team effort,” Paul said. “We’re only able to do what we do because it’s a family affair.”

Dutch Hollow is a member of the Agri-Mark cooperative, well known for its production of the Cabot brand of cheeses. The dairy also supplies milk to Beecher’s Handmade Cheese in New York City, Four Fat Fowl Creamery in Stephentown and High Lawn Farm and Mapleline Farm, both in western Massachusetts.

As for helping people know what they don’t know, Nate explained, “Dairy farms have been the bedrock of the farming community in this region for 300 years. Despite that, there isn’t much of a direct farmer-to-consumer connection with dairies. We’ve always been dedicated to operating with transparency so that people in the community can really see what we do and how we do it.”

Dutch Hollow has long been hosting educational visits for schoolchildren. According to Nate, every school district in the county and several from surrounding counties make annual field trips to the farm. “My own first grade class visited the farm years ago, and I first started hosting them myself when I graduated 20 years ago,” Nate said. Paul jokes that to the grammar school set, his son is now “Farmer Nate.”

ADANE awards a $1,000 prize to a school district (to provide portable coolers and other equipment to keep dairy products fresh) in the name of its Dairying for Tomorrow Award winners. Dutch Hollow chose its local school system, Schodack Central School District.

Annual open houses have given the Chittendens the opportunity to educate the community about the many positive practices dairy farmers use to protect the environment and care for their cows. Nate elaborated,” We’ve had anywhere from 500 to 1,000 people pass through the farm in a single day. They’ve gotten to see how our cows are milked, a calf being birthed and how feed is made.”

For the past 10 years, Dutch Hollow has made blanket mailings of its newsletter to every address in the surrounding ZIP codes. The newsletter keeps neighbors in the community abreast of the happenings at the dairy. Nate is proud to say, “We’ve had nothing but positive responses.”

Finally, social media has become an invaluable tool in relaying information about the farm instantaneously to countless individuals both within and outside of the region. Nate said enthusiastically, “It’s definitely something we take advantage of.”

Always concerned with what’s next, Nate said that the Chittendens are preparing for the farm’s future both in terms of administration and outreach. Three of Paul’s grandchildren are already actively engaged in the farming business. And the current pandemic shutdown has given Dutch Hollow a new opportunity. “We’re working with ADANE on its Virtual Farm Tour Series. It allows for students to engage in remote learning about how a farm works,” Nate said. “Over 10,000 students registered on the very first day.”