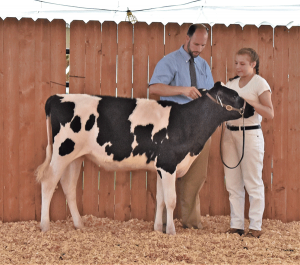 Gabriella Taylor is one of the only kids in school with first hand farming experiences in rural Wayne County, NY. Many of her peers don’t understand what farm life is like and it’s no secret that disconnect can also lead to misunderstandings about animal husbandry and welfare. Devoted to sharing the truths of the dairy industry, she launched DairyDilemmaTruths on Facebook and Instagram. She regularly posts about everyday management practices that keep cows healthy and comfortable.

“They are definitely pampered more than us. They get to eat and sleep most of the time,” she said. “I have gotten shout outs from very popular agriculture related accounts such as NYFarmGirls and DairyGirlFitness, which helped me grow my followers by 200 in a day. I really enjoy using this account to promote and educate the people that follow it and hope to soon be as influential as the accounts that gave me shout outs.”

Taylor’s efforts to educate others about agriculture is just one reason she was selected as one of eight young people honored with the 2020 Young Distinguished Junior Member awards by the Holstein Association USA. She has been a member for 10 years.

YDJM applicants are judged on a book they create, which highlights the Junior’s Holstein member’s work, activities and projects, breeding program and personal views. Junior members ages 9 to 16 are eligible to apply for the YDJM recognition.

“The Distinguished Junior Member contest has been held since 1922 and is the longest running Holstein youth program. The award recognition is coveted by junior members working with Registered Holsteins® and participating in our programs across the country,” stated Kelli Dunklee, Holstein Association USA & Holstein Foundation Program Specialist. “These outstanding dairy youth are incredible individuals, leaders and role models for the dairy industry.”

In 1943, Taylor’s great-grandfather established Sunnylot Farms on 500 of acres in Newark, NY. The family milked 500 registered Holsteins until selling the farm in 2007. Her father, Jonathan, went to work at El-Vi Farm in Newark, NY as the assistant feed manager. Gabriella works there too—she is in charge of feeding calves until they reach about four months of age.

“I’m in charge of a lot of cleaning things and doing some vaccinations as well,” she said.

Mixed into the 1,400 cow milking herd, Taylor has ownership of three red and white registered Holsteins. Her grandparents helped her start a small herd in 2012 when they bought her OCD Reality Filly Red. In 2014, Filly had her first calf T-Destined AA-Fuchsia-Red, which allowed her to establish her prefix T-Destined.

“I came up with that because our last name is Taylor and I hope to own great cows one day and that herd is destined for greatness,” she said.

In just a few short years, she has learned how hard the business can be. Through production and health issues, she has lost five of the six cows in her original herd. Some had to be sold, others died. George Andrews, one of four partners in El-VI, offered Taylor two cows in exchange for working on the farm.

“I was so incredibly thankful that I could practically restart my herd again,” she said.

“The partners of El-Vi Farm have been really good about supporting youth,” added Taylor’s father, Jonathan. “They have allowed us to have our animals here. They allow several 4-H members to lease animals for shows.”

Taylor first joined the New York Junior Holstein Association eight years ago. She jumped into all the activities—from giving a prepared speech to dairy jeopardy and dairy bowl. In 2018, she won Dairy Jeopardy at the National Convention in Michigan. Last year, she was a member of the team to win the National Holstein Foundation Dairy Bowl as part of the Wayne-Ontario County Holstein Club. It was the first New York team to win since 1991, according to Jonathan, who served as the coach.

She also participates in 4-H and the Dairy Princess program. At age 10 she became one of the youngest Dairy Queen ambassadors. This year during the organization’s virtual pageant she was selected as Alternate Princess.

It takes months to prepare “the book” for the Distinguished Junior Member contest. The process included answering four questions about the dairy industry. Applicants must include their resume, an overview of their dairy activities, school activities and other extra-curriculars. For Taylor’s age group, the project is completely written. However, it prepares participants for the next stage, which begins at age 17 and includes an in-person interview.

Though time consuming, the application process has set her up for success and given her an idea of a career path. “I’m really thinking about a career in communications, possibly promotions and marketing and maybe working with American Dairy Association Northeast,” she said. “I want to let people know how much more there is more to farming that they don’t see.”

Taylor encourages other youth to get involved by talking with the advisor of their state club. Looking at another person’s book can be helpful too, she said. Entering and receiving feedback is the best method for deciding what to include.

“We’ve just supported her through all this and she has to take the reins and does what she wants to do. She has a lot of great ideas for a young person,” said her mom Cari Taylor.