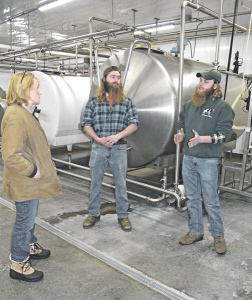 HOPKINTON, NH – U.S. Sen. Maggie Hassan (D-NH) visited a dairy farm only 10 miles from the gold-domed State House in Concord on Friday, Jan. 10. Earlier that week, Hassan, as a member of the Senate Finance Committee that has jurisdiction of trade deals, voted to support the U.S.-Mexico-Canada Agreement (USMCA). She also urged the full Senate to vote as soon as possible for this landmark trade deal.

“One of the reasons I support this agreement is because it will help New Hampshire’s dairy farmers – both by removing long-standing Canadian trade barriers and providing more trade certainty overall,” Hassan explained to Si and Nate Robertson. They, along with their younger brother Bram, have decided to stay working on the Bohanan Farm and Contoocook Creamery, potentially becoming its fifth-generation owners.

Last summer, Hassan had the opportunity to ask former Agriculture Secretary Tom Vilsack questions that highlighted her belief that strong mechanisms must be put in place to enforce USMCA’s dairy provisions. Vilsack now heads up the U.S. Dairy Export Council.

The original North American Free Trade Agreement went into effect on Jan. 1, 1994, more than 25 years ago, Hassan pointed out.

“Digital commerce didn’t exist back then,” the senator pointed. “We’ll see some real changes to the ‘rules of the road,’ such as electronic filing at Customs, increased flexibility and many efficiencies. USMCA is not a silver bullet for the dairy industry, but it will make a positive difference.” Online communications will replace today’s onerous paperwork, and red tape and tariffs will also be reduced for small exporters, Hassan said.

She also emphasized that the updated trade deal has strong support on both sides of the aisle, with Democratic and Republican negotiators bringing diligence and good-faith efforts to bear to work out important and complex issues.

“The USMCA that Sen. Hassan worked on will be a big help to us here at the Contoocook Creamery, removing unnecessary barriers to accessing the Canadian market,” Nate Robertson stated. “We appreciate what Senator Hassan is doing to get the trade agreement implemented, and it was great to show her our farm and share with her what we’re doing to grow our business and serve the community.”

Bram, as well as their dad, Jamie Robertson, were not on hand for Hassan’s visit, as they were out delivering truckloads of glass bottles of milk to retail customers, ranging from Hannaford Supermarkets to small general stores. All the milk they deliver is pasteurized and bottled under its own label in Contoocook Creamery’s new processing plant that opened last summer.

Opening their own processing and bottling plant was a major step toward the family trying to ensure its own sustainability.

Two other family members were on hand, however. Heather Robertson, mother of Si, Nate and Bram, all of whom graduated from UNH, and her niece, Meagan Wilson, who has focused on branding and marketing Contoocook Creamery’s bottled milk, plus cheese and butter, were present.

Heather (the fourth generation) grew up on the farm along with a sister and two brothers. Si and Nate explained that their dad Jamie “married in.”

It was back in 1907 that their great-grandfather, Lester Bohanan, bought a farm on the banks of the Contoocook River. Their parents, 80-year-old Adele and 78-year-old Glenn Bohanan, the third generation, still live on the farm, but are not really involved. Heather and Jamie took over the Bohanan Farm from them 30 years ago in 1990.

The Bohanan Farm grew over the years and now includes 440 acres. Its dairy herd has 189 milking cows plus 160 young stock. Most are registered Holsteins, with a sprinkling of Ayrshires and two Brown Swiss. Typically, a small herd of 10 Angus beef cattle are also raised on the place.

Just over a decade ago, Jamie negotiated with the town and other funders, including state and federal agencies, to sell conservation easements on 413 acres, excluding farm buildings and family homesteads, Heather explained. A special town meeting was called to ratify the whole deal, designed to keep a substantial swath of acreage undeveloped, including fields, woodlands, river access and frontage and non-motorized hiking trails.

“When the wholesale milk price crashed in 2009, we knew that if we wanted to keep the farm alive, we’d need to change our strategy,” the family farm’s website reads. “After much thought and research, we launched Contoocook Creamery, a small business where we make and market our products ourselves rather than just wholesale our milk to a large company. Contoocook Creamery makes cheese, butter and glass-bottled milk made exclusively from Bohanan Farm cows.”

For many years, these farmers had to truck their milk to a bottling plant in Maine, more than two hours away, depending on driving conditions. This was costly in both dollars and time, Si and Nate explained.

Last summer the creamery started up its own on-site glass-bottling operation in a dedicated processing building, thanks to an investment of over $1 million. Nate explained that their parents had hoped to start on-site bottling about a decade ago, but banks were not interested in loaning money until it was clear that there was a market for their high-quality, premium-priced product. The creamery, using carefully chosen and compatible second-hand machinery and tanks, now bottles a day-and-a-half’s worth of the herd’s production. The family’s goal is to increase the sale of its own labeled milk – white, chocolate and coffee – until they can sell all their cows can produce.

“Even though we have a new small business, we haven’t strayed from our old values: ‘To be a modern dairy farm that produces milk of the highest quality with the most efficient and environmentally sound practices available,’” the farm’s website concludes. “The well-being of our cows is the most important quality of Bohanan Farm. It takes happy, healthy cows to produce the high-quality milk that we take so much pride in.”

Readers may already be familiar with the Robertson family. Bohanan Farm was one of several from across the country featured in “The American Farm,” a docuseries that premiered in April 2019 on the History Channel.

“New Hampshire’s farms are a vital part of our economy and way of life,” she said, pledging to continue working to ensure that the creamery and other farms can thrive.