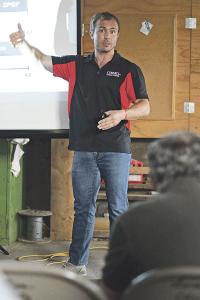 The first has investigated how to increase dairy farm profitability by reducing the interbreeding interval and optimizing the conception rate of lactating dairy cows. The second, focused on improving dairy cow health and reducing labor costs with automated health monitoring technology. Both projects are funded by the NY Farm Viability Institute.

“Julio’s research is zeroing in on the management questions that need answers about reproduction and a cow’s health,” said Robert Lynch, DVM, a dairy herd health and management specialist for Cornell College of Agriculture and Life Sciences PRO-DAIRY program.

During the first half of Giordano’s presentation he explained the success rates of two distinct breeding programs tested at a commercial farm designed to improve conception rates of cows that failed to become pregnant to a previous breeding.

Both programs were tested at commercial farms with the goal of maximizing herd reproductive performance through assignment of treatments at the time of open diagnosis based on the structures that cows have on their ovaries.

“For example, the Short-Resynch plus P4-Synch (P4 = progesterone supplementation) optimized performance by allowing re-insemination of all natural heats before pregnancy testing, reducing the interbreeding interval for about 70-75% of open cows (cows with a corpus luteum on their ovaries), and increasing the fertility of the remaining 25-30% of the cows (cows without a corpus luteum on their ovaries),” he explained. “Another program that combined Resynch-D25 (day 25) and P4-Synch resulted in fewer cows bred at detected estrus but more cows received timed artificial insemination (TAI) and their overall fertility was increased.”

In both scenarios, Giordano and his team were able to reduce the number of days a cow was open and get more cows pregnant by the end of lactation than the typical Resynch programs used by many farms in New York.

“We have proven in research done at commercial farms that the programs evaluated result in similar reproductive performance,” he said. “Therefore, the choice of program depends on the known or expected estrus detection efficiency and fertility of estrus breedings at the farm.”

“The good news is that there are options to meet the needs and management preferences of most farms,” he said.

During the second half of his presentation, Giordano highlighted different technologies designed to either fully automate or semi-automate health monitoring of dairy cattle. Examples of these technologies are sensors that monitor rumination time, physical activity, and daily milk weights.

More recent research has demonstrated that through a combination of multiple sensor parameters such as rumination, activity, and daily milk weights with visual observation of cows it may be possible to reduce the number of fresh cows to check for diseases, according to Giordano.

Although some minor differences in the ability to detect cows suffering health disorders was observed, when compared to an intensive traditional health monitoring program based on evaluation of all cows, his team did not observe significant differences in milk production, cows culled and reproductive performance for the first 150 days after freshening.

“Collectively, our research suggests that these automated health monitoring technologies could help reduce the burden of traditional health monitoring programs and may help reduce labor cost and cow manipulation,” he said. “While much work remains to be done in this area, these tools may offer a solution to some of the pressing problems affecting dairy farms.”

The effectiveness of automated health monitoring technologies was of most interest to Allison Thorington from Glenview Farm. The Fulton, NY farm milks about 500 cows.

“The farm is looking into the activity monitors so it’s interesting to learn about the degree to which they can track a cow’s health issues but that they don’t fully catch everything,” she said.

The Schuylerville workshop was the first in a series of six planned research updates. The remainder will be delivered at farms across the state or broadcast via webinar. Regardless of location, farmers flock to an opportunity to hear Giordano speak.

“Anytime I have a chance to listen to Julio, I make sure to attend,” said Aaron Allen of Allen Waite Farms. The Schaghticoke, NY farm milks more than 2,000 cows. “I’m very interested in hearing his latest research. He’s doing good research and he’s conscious of how things work on commercial farms does a good job balancing that with research.”