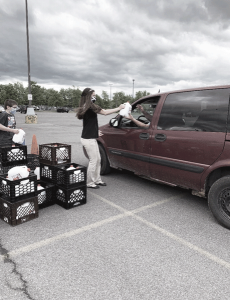 The average person is more than four generations removed from the family farm. This means the majority of the public has never stepped foot on an operating farm. This poses a threat to farmers everywhere, as consumers grow confused about how their food is grown and raised. It is especially an issue in the dairy industry because there are so many groups that push untrue information out to the public as a way to scare them away from consuming dairy products. The good news is that there are people in the industry working hard to share the reality of dairy farming. One of those agvocates is Dairy Princess Kailey Kuhn of Marion, NY.

Kailey is the Wayne County Dairy Princess, and she works hard to create transparency between consumers and producers. Although she doesn’t live on a farm, she has been working alongside her dad at a neighboring dairy farm since she was 14. Her love for cows and the dairy industry started when she was five-years-old and started showing cows at her local county fair. Since then, her passion has grown. She joined 4-H and the Holstein Association, which she mentioned allowed her to find even more avenues to become immersed in the dairy industry, such as Dairy Quiz Bowl. She said, “My team ended up going to Wisconsin for the National Quiz Bowl Competition and we ended up winning in 2019!” Kailey will be a high school senior this autumn and plans on pursuing a degree at SUNY Cobleskill in Agriculture Education.

On top of all of her other commitments, she is the Wayne County Dairy Princess this year. She explained a dairy princess’s role: “We are sponsored through American Dairy Association North East and we strive to promote the hardworking dairy farmers of our county. We like to show consumers how well dairy farmers care for their animals and land. We also explain to consumers that milk is nature’s most nearly perfect food and has nine essential nutrients that helps keep everyone healthy and hydrated.”

In order to become a dairy princess, she had to compete in a pageant last May. The participants had to write speeches and answer two questions judges ask. The judges then pick the year’s dairy princess based on their performance and the rest of the competitors become alternates. Anyone can run to become dairy princess, as long as they are 16 years old.

Being a dairy princess comes with a lot of responsibilities. Her main responsibility, along with the rest of her court, is to promote the dairy industry. If we were not in the midst of a global pandemic, Kailey said they would normally be promoting the industry by “traveling to several schools in order to educate the younger generation and going to any events we can in the county and around New York State in order to promote the dairy industry.” Typically, they do a lot of public relation work at the New York State Fair, but as it is cancelled this year, Kailey has to find other ways to reach out to the public.

The lack of in-person events will not deter Kailey from promoting the dairy industry. She said, “We are trying to be as active as we possibly can on social media and get out to the public as much as we usually do, but online.” She has several videos in the works that she plans to share on the Wayne County Dairy Princess social media platform that allow consumers to have an inside look of modern, operating dairy farms. She added that social media has been so important in these times because it has allowed her to reach a wide population and create that transparency virtually.

Although many events have been cancelled due to COVID-19, Kailey said, “We have been able to participate in milk drives and have a presence at the local farmers market.” Although dairy princesses have less face-to-face interaction with consumers, they are doing what they can to talk to the public.

Kailey mentioned she has learned a lot being a Dairy Princess. One of the most important things was “how important it is to get out to the public and tell them about dairy because they really don’t know as much as we think they know.” She said she still gets asked if chocolate milk actually comes from brown cows.

She recommends anyone interested in the dairy industry to become a part of the Dairy Princess program. She said, “It’s such a great experience and it’s an awesome way to get the word about dairy farming out to the public.” She shared that being a princess is a great image for younger generations. Kids will run up to her, as they are excited to see a real life “princess,” but then she is able to use their excitement as an opportunity to teach them about the dairy industry.

Kailey urges everyone to follow her court on social media @wayneco.dairyprincess, as “it is one of our only ways to connect with the public right now.” You will have the opportunity to see all of the great dairy promotions they are creating. Kailey took on the role of a Dairy Princess at a crazy time, but she and the rest of her court are doing what they can to shine a bright light on the world of dairy.