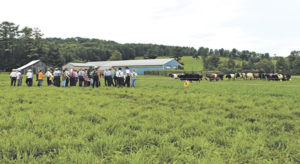 If you want to learn about the attributes of good grazing management, go on a pasture walk with a herd of farmers. But if you want to see real resiliency on the land, visit a grass farm when “Fred the Hurricane” blows into town and dumps seven inches of rain on the landscape. It’s an opportunity to appreciate and study how dairy graziers are building soil health, producing high quality organic milk and providing ecosystem services for their community in the face of weather events.

Quoting Proverb 4:11: “I instruct you in the way of wisdom and lead you along straight paths.” That path to wisdom for over 50 farmers and agency professionals just happened to coincide with the remnants of a hurricane but hardly dampened the group spirit.

Dairy farmer Isaac Troyer of Candor, NY, teamed up with Cornell Cooperative Extension’s South Central New York Dairy and Field Crops staff and the Tioga County Soil & Water Conservation District to host a two-hour tour that focused on his family’s 40-cow, certified organic dairy grazing operation. Troyer said he’s been in the farming world since he was a small child, first watching his dad work with cows and now working with them himself. Due to his experience, a lot of the decisions he makes are based on estimation and long-term knowledge and the notion that “ballpark is good enough.”

He was concerned about inheriting Kora Tall Fescue when he bought the farm and saw the cows didn’t like grazing it, even though it’s an endophyte-free variety. “The cows like fescue for hay, but not as a grazing grass,” said Troyer. The group of farmers helped him vet some scenarios to manage his fescue-heavy swards, from re-seeding and inter-seeding strategies to pre-clipping before grazing or using a different class of livestock to utilize it. On a positive note, it’s great for autumn and winter grazing.

Troyer showed how he trampled tall grass using his dairy heifers and planned grazing, resulting in improved biological life, armoring the soil against the elements and creating a high-quality, diverse sward which kept animal performance high. It was noted that the forage was regrowing an inch per day from the rain and heat and humidity.

With all the moisture, guests saw a successful farmer-made bridge constructed of interlocking concrete blocks on stone piers. During times of low flow, the stream flows under the bridge; in times of high flow it easily goes over the bridge and self-cleans debris. The previous farm owner, Rob Howland, said he installed the practical bridge 15 to 20 years ago using about $5,000 of his own money and a friend as an unofficial engineer for the design. “It’s been tested many times and has held up well,” said Howland.

The group, unencumbered by sporadic rain showers, discussed dry cow grazing regimes, petted the draft horses, took soil compaction readings with a furnished penetrometer, studied manure pats for signs of beneficial dung beetles, did some pasture stocking math and talked about the attributes of having a grazing chart to keep track of daily decisions and simplifying recordkeeping for organic compliance. Troyer showed farmers his spotless milking parlor he built from scratch and how he manages his herd during the non-grazing season.

As the showers continued, guests convened under the barn roof for fellowship and reacquainting with friends with snacks provided by the Troyer family, including plenty of ice cream from the Tioga County Agricultural Resource Group and the Tioga County SWCD. Fred couldn’t dampen the resilience of a group of committed farmers.