Dairy Digester sets up Fort Hill Farms for the future 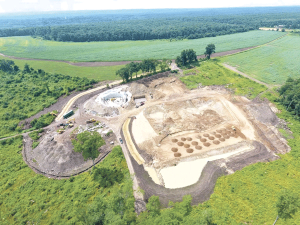 A Connecticut dairy farm and a Pennsylvania energy firm have partnered in a project to promote renewable energy and sustainability.

This spring, Fort Hill Farms of Thompson, CT, and Ag-Grid Energy of Kennett Square, PA, joined together to form the dairy digester Fort Hill Ag-Grid LLC. The ag-grid project’s goal is to complete and begin operation of an anaerobic digester at the farm’s Connecticut location by year’s end.

Anaerobic digestion is the process by which microorganisms break down certain organic materials in the absence of oxygen. The process is used to both manage waste and to produce fuels.

Fort Hill Farms has been a family operation for 76 years. With a milking herd of over 200 cows, the farm is a member of two regional cooperatives: The Farmer’s Cow in Willimantic, CT, which features milk, cream, half and half, eggs and summer beverages, and Cabot Creamery, well known for distributing its cheeses across the Northeast. Their total herd numbers 500.

Kies Orr is a fourth-generation farmer and co-owner of the 1,200-acre Fort Hill. She studied agricultural business at the SUNY Cobleskill. The recent reduced market prices of milk spurred Orr to look for additional sources of income for enhanced farm sustenance as well as innovative methods to become more energy efficient. The anaerobic digester will allow her to pursue both.

“Our cows are fed a diet of haylage and corn silage,” said Orr. The herd produces an estimated 22 tons of manure per day, or around 8,000 tons annually. The wash water from the milking parlor and the total amount of manure-related material is estimated to be 40 tons per day, or roughly 14,625 tons each year. “We get quite a bit of manure and organic waste. And that’s where Rashi comes in.”

Dr. Rashi Akki founded Ag-Grid Energy in 2016 and serves as the firm’s CEO. A chemical engineer who received her doctorate from the Georgia Institute of Technology, Akki worked for the chemical company DuPont for 20 years. After leaving that company’s research and development department, she launched her new venture to support dairy farm sustainability through innovation. “Our goal is to help farms produce renewable energy. An anaerobic digester can really transform how a farm like Fort Hill functions in its ecosystem,” she said.

Predominantly working with farms in the Northeast and Mid-Atlantic, Ag-Grid currently has partnerships with farmers in Connecticut, Maryland, Massachusetts and New York.

“Normally cow manure is collected into a manure lagoon,” explained Akki. “Once the anaerobic digester is completed, the manure and other food wastes can be fed directly into that instead.”

Akki pointed out that the oxygen-free (anaerobic) environment is a key condition in producing and harvesting “biogases,” a type of biofuel. “As the contents ferment, biogases are emitted, mostly methane and carbon dioxide, along with some hydrogen sulfide and ammonia. They then can be harnessed and converted into electricity,” she explained. Heat is also a byproduct of the fermentation process.

In addition to the manure produced by Fort Hill, approximately 18,000 to 24,000 gallons of food waste will be fed into the anaerobic generator daily.

By trapping and collecting these gas emissions, the anaerobic digester also provides a measure of environmental protection, as manure lagoons can be linked to adverse health and environmental effects.

Fort Hill Ag-Grid’s 450-kilowatt anaerobic generator is expected to produce 3.5 million kilowatts per hour (kWh) of electricity per year. Some of that electricity will stay right on the farm. A projected 200,000 kWh each year will be used by the dairy farm. “Our new barn construction will be entirely heated by our own electricity,” said Orr. The dairy farm will pay the dairy digester project $0.12/kWh, or a total of about $24,000 per year. The remaining 3.1 million kWh per year is to be sold to Eversource, the local grid operator, at an estimated price of $0.131/kWh, about $400,000 each year.

Fort Hill will not just see an increase in profits from its electricity sales. Orr expects to earn income by collecting tipping fees from other farmers looking to offload manure and organic waste, and from selling the resultant odorless manure as fertilizer. The anaerobic digestion process “scrubs” the manure of the hydrogen sulfide that gives it its foul, sulfur-like smell. “We’ll also be able to save money by using the odorless manure and food wastes as bedding for the cows. Right now we have to spend money on sand for that, but this will help us eliminate that expense,” she said.

Fort Hill will also be able to capitalize on Renewable Energy Certificates (RECs.) Also called “green tags,” RECs are tradable energy commodities documenting proof for every one megawatt hour (MWh) of electricity that is generated from an eligible renewable energy resource. When a renewable energy generator such as the Fort Hill Ag-Grid microgrid generates a MWh of power, it creates two sources of value: electricity, which it can sell, and an REC stating that it generated one MWh of electricity from clean sources. This REC can also be sold. This means every renewable generator in the U.S. has two revenue streams: electricity and RECs. (One megawatt is equal to 1,000 kilowatts.)