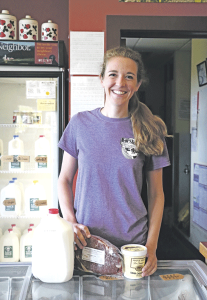 During June six farms in Western Massachusetts created a way for customers and the public to be more involved in their farms and to increase business. They created a postcard-like passport that could be stamped at each business. After all the businesses had been visited, the customer’s passport would be entered into a drawing for a prize from one of the participating farms. This act of solidarity is the hallmark of the farming families involved who have known each other as friends and neighbors for decades. This was the second year for the annual event.

Barstow’s Dairy Store and Bakery in Hadley, MA, serves a local lunch, gives farm tours and has a BGreen anaerobic digester with two engines producing enough energy for 1,600 average homes, including its own farm. Barstow’s Longview Farm is a sixth- and seventh-generation farm started in 1806 that uses robotic milkers for 250 cows out of their herd of 521. On July 9, their highest milk-producing cow was Ms. Dehlilah, at 134 pounds in 24 hours. They also sell their own beef. Barstow’s Longview Farm is one of 800 farms in Cabot Creamery Cooperative and one of the 21 farms chosen for Open Farm Sunday as a part of Cabot’s Centennial Celebrations this autumn.

According to Denise Barstow, the driving force behind the Dairy Crawl, it was held “to let the public know that there are dairy farmers right in their backyard and that regardless of size, shape, methods, practices and diversification, they are struggling. We farmers have a history that goes back generations, and that history includes each other. The reason we have been successful is because there are other farms around. A community of farms creates a great support network, keeps more land open, gives us a louder voice for our legislators to listen to and it makes it more worthwhile for the milk truck, grain truck, tractor salesman, other agricultural resources, etc., to come to us. There’s a common misconception that farmers are competing with each other – especially in the dairy industry, with how cooperatives and pricing are set up. It’s in our best interest to support each other. It doesn’t matter where you shop; when you support one farm, you likely support another.”

Maple Valley Creamery, McCray’s Country Creamery, North Hadley Sugar Shack and Market were other stops on the crawl. Smiarowski Farmstand and Creamery in Sunderland and Flayvors of Cook Farm in Hadley were also included.

Each of these businesses created a farm store or farm stand to diversify to increase their business, keep them in the public eye and make them more accessible.

“All six of the Dairy Crawl farm stands are excited to speak to the public about the economic, environmental, nutritional and historical values of local dairy farming,” said Barstow. “Two of the participating farms are not even connected to dairy farms,” she added.

“When people think of farms they think of friendly animals, happy memories and a connection to their roots. The reality is that dairy farmers are stressed out now more than ever. And our community should know that. I think a non-competitive promotion makes the idea of these farms in crisis easier to digest – more approachable. Instead of playing the ‘woe-is-me’ card we are educating people about what they can actually do to help the farmers. And it’s a fun and affordable way to get the whole family involved,” said Barstow.