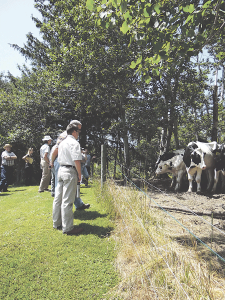 Virgil explained his procedures of bringing in young replacement heifers and transitioning them to electric fencing, working with weed and pasture management, fencing and rotations, anti-fly and insect control, and his experience with water and mineral management.

“We’ve worked with Soil and Water and try to do little projects here and there,” said Virgil, adding that he has gone on pasture walks to learn what works for other grazers.

Wheeler explained that because dairy producers realize the significant investment of raising replacements in confinement, grazing replacement heifers has become an opportunity for some farms to find profit in custom grazing.

“Heifers are the foundation of a dairy enterprise,” Wheeler acknowledged, reporting that there are about 350,000 dairy heifers currently being raised in New York, with farms paying about $3 per day for each replacement heifer raised in confinement on farms. The cost of feed represents more than half of the overall cost.

“That means that New York State dairy farmers are paying a million dollars a day to raise replacements across the state,” remarked Wheeler. “There is a big industry right there in and of itself of raising replacement heifers.”

This would be a win-win situation for both grazing farms and conventional farms placing replacements out to grazing farms.

“Getting heifers out on pasture is one way that farm can reduce that cost of raising that replacement heifer,” confirmed Wheeler, adding that more and more conventional dairies are showing interest in contracting with custom grazers; reducing costs of raising replacements, while maintaining — or even improving, their health and productivity.

Moving replacements off farm also provides milking operations opportunity to free up some farm resources, such as manure storage and labor, utilizing these for their milking herds.

Labor is one of the biggest resources when farms consider cost.

“We know we have a lot of challenges finding good labor in ag in New York State,” remarked Wheeler.

Fay Benson had been a certified-organic, grazing, dairy farmer for 20-years, and he spoke to attendees about his experiences with raising replacement heifers for other farmers.

“At one time I had as many as five different farms that had their heifers at my property,” said Benson. Some problems he encountered with having multiple farms’ animals on his property, included farmers all wanting to sort heifers at different times. Worse yet, some heifers developed health problems that ending in aborted calves. 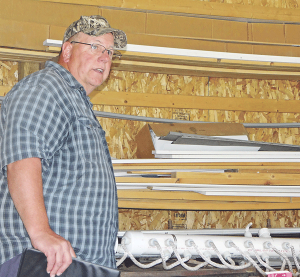 “Some organic farmers don’t use all of the same vaccinations,” Benson explained. So, while one herd may have resistance to a disease, another herd will continue to be sensitive to it.

Benson reported another problem in transitioning conventional dairy farm heifers to outdoor life, when they had never been outside before. Trees moving in the breeze and grass hitting their legs would cause them to be nervous, and potentially wreak havoc — and, at the very least, rounding up nervous heifers can be time consuming.

Virgil explained his procedures with sturdy, highly visible, electric fencing; graduating the youngsters into larger areas as they settled down. Observation is important.

This publication, which was distributed freely among attendees, contains charts, examples of targeted growth-rate gains, information about building infrastructures, nutrient requirements, immunity and vaccination information, and most everything you need to know about raising grazing heifers, including a sample contract form.

One thing is for certain; you need to maintain accurate records.

Virgil shared information on how he keeps track of everything he does with his pastures and herd. Pastures are numbered and all details are accurately recorded and dated, so there is no question later.

One report of heifer death from a poisonous plant was discussed and underscored the importance of knowing what plants are growing in your pasture through pasture management protocol. Soil testing would be a segment of pasture management.

Field size determines how frequently Virgil moves the herd housed at his farm. Each move is notated in his records.

Wheeler presented additional information about an Excel version of ‘Pasture Cost Calculator,’ which can be used as a guideline to calculate total costs of pasture on a per heifer per day basis and used for documentation.

“Anyone who wants a copy of the Excel file for estimating pasture costs can email me and I will be happy to send it to them,” said Wheeler. She is currently in the process of writing a blog/newsletter on the potential for developing a dairy heifer grazing enterprise in New York.

“We were thrilled that this pasture walk brought together such a diverse group, including beginning and experienced heifer grazers, beef and sheep producers, retiring dairy farmers, and a large dairy looking to improve their own heifer management practices,” commented Wheeler. “The program offered something for everyone, with ample opportunity for farmer-to-farmer discussion and learning. Participants appreciated the integration of research-based information with Tim Virgil’s own personal experience managing his custom heifer grazing operation.”

One seasoned grazing farmer commented anonymously on something learned. 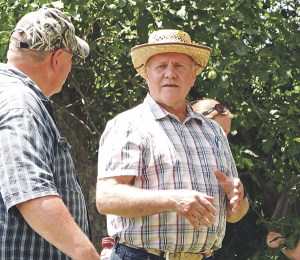 “I learned a very important piece of information that just sort of changed everything,” commented the farmer. “I think Fay had touched on it, but it didn’t really register until I talked with the young dairy farmer. The thing is, heifer barns are always overcrowded. In the wintertime a dairy can manage a little bit of overcrowding, but it gets really difficult in the summertime. You think of a barn as being immune to the weather, but in reality the carrying capacity goes down in the summer because of the heat and humidity. So there is a seasonal overcrowding of heifer barns because of the weather.”

The farmer concluded, “Even if the dairy has a barn just barely filled to capacity, they would still love to get rid of 10% or 20% of their heifers during the grazing season because that would make a big difference.”