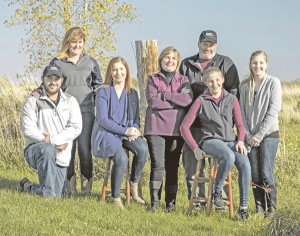 For over 25 years, by relying on family, hard work and commitment, one first generation farm in upstate Vermont has grown from humble beginnings into a nationally recognized dairy.

Darlene and Newton Reynolds, owners and operators of Crosswinds Dairy and Daughters, have presided for the past quarter century over impressive expansions of both brood and business. Both natives of the Green Mountain State were recently presented with the Dairy Farmers Association of America’s Member of Distinction Award for 2019. Kim O’Brien, DFA corporate communications director, stated that the Reynolds family was singled out and honored for the way they had “tackled challenges and found success on their Vermont dairy farm by working with their local community and together as a family.”

The farm was founded in 1991 when Newton, who already had substantial farming experience, leased a barn on a relatively small plot of land and rented 150 cows in Alburgh, VT.

“Way up in the northwest corner of the state,” Darlene laughed. “Three minutes from New York, two minutes from Canada!” Darlene became part of the operation when she married Newton a year later. Darlene, whose background was not in farming, had studied human services at Champlain College in Burlington, and quickly became Crosswinds’ herdswoman.

Over the years, the farm became what Darlene describes as an “add-on farm.” “We just kept adding on to it!” she said. Citing expansions in 2001, 2006 and 2009, she explained that today Crosswinds now operates with just under 700 cows on nearly 1,600 acres. These expansions also saw the addition of four new structures to Crosswinds’ original barn – these additions often resulting from the conversions of older tool sheds.

Crosswinds is now classified as a Medium Farm Operation (MFO) by the state of Vermont. The MFO program provides a Vermont-specific alternative to the federal permitting program that allows medium sized farms to seek coverage under a single General Permit issued by the Vermont Agency of Agriculture, Food & Markets (VAAFM). The program’s goal is to reduce the amount of phosphorus and other waste entering Vermont waterways.

Over the years, as Crosswinds grew, so did the Reynolds clan. Darlene is quick to point out “just how proud we are of our daughters. They are all wonderful, smart and hard workers.” Serena, age 25, is a graduate of Vermont Technical College in Randolph, where she earned her degree in dairy management. She serves as Crosswinds’ assistant herdswoman. At 23, Sadie is currently pursuing her law degree at Roger Williams University in Bristol, RI. Olivia, 21, is currently enrolled in the University of Vermont’s “FARMS 2+2” program and will be graduating with a degree in animal and veterinary sciences. Finally, Kassandra, 13, is described by Darlene as a “very busy middle school student.” All of the Reynolds daughters work or have worked at Crosswinds.

As for their distribution, Darlene said the milk produced at their farm stays very local, with the majority of their product going directly to the St. Albans Cooperative Creamery. The cooperative is a member-governed dairy cooperative committed to providing service, stable markets and the greatest achievable return to its members by delivering the highest quality milk, milk products and services to its customers. The cooperative aims to provide active leadership in the dairy industry and the political environment to benefit all dairy farmers. Darlene serves as a delegate to the cooperative.

Darlene was also one of the founding members of the Franklin and Grand Isle Farmers’ Watershed Alliance. This nonprofit organization is dedicated to ensuring environmentally positive solutions and enabling the dairy industry through education and funding to better the soil, air and water of the Lake Champlain Watershed while remaining economically viable. Darlene currently serves on the alliance’s board of directors.

Farming, Darlene said, provided her and her husband with a lifestyle that allowed them to work toward providing for their family, give their daughters the opportunities in life they deserve and contributing to a cleaner and healthier community. Being recognized for this by DFA only makes her decision to dive headfirst into farming all the more satisfying. She said there are days when she’s just proud just to say that Crosswinds has made it for over 25 years and is still standing.

When speaking of Crosswinds’ future, Darlene is cautious but sanguine. “We’re not expanding at the moment… Right now we’re focusing on surviving these current milk prices. Depressed milk prices are hitting family dairy operations particularly hard.” But Darlene is sure the Reynolds are up to the challenge. “We’ll keep working hard.”