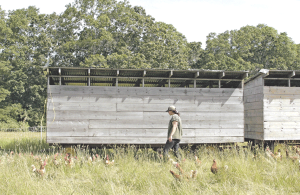 Confusing and misleading claims on conventional poultry products and overall industry “greenwashing” has left consumers perplexed. An emergence of pastured egg brands such as Vital Farms and Handsome Brook Farms, which rely on regional networks of farmers to raise laying hens and produce eggs to their specification and standards to be sold in supermarkets nationwide, has provided consumers with a choice beyond conventional egg-laying models, but has also blurred the lines of pastured poultry production.

The American Pastured Poultry Producers Association (APPPA) recently released five promotional videos explaining what pastured poultry really is and its benefits to chickens, humans and the environment. APPPA serves and represents a nationwide network of independent poultry farmers raising chicken and eggs using a pasture-based model – animals gain nutrition from pasture, the pasture benefits from the actions of the animals and the poultry are raised primarily outdoors, moving to fresh pastures as indicated for animal and soil health.

“Living on pasture ensures the forage access, sunlight access and the movement to fresh pasture, which is a health consideration for the pasture and the hens,” explained Mike Badger, APPPA Executive Director. The fight to educate consumers of “the truth about what makes a pasture raised egg special and why it matters” is the impetus behind the promotional videos.

By now, the misrepresentation of free range should be common knowledge. The term officially means, per the USDA, that hens are not kept in cages and have access to the outdoors. Whether or not they actually go outdoors, or how often, or what the outdoor environment is like, has no bearing. Free range eggs come from hens raised in indoor shelters, typically under crowded conditions. Cage-free egg claims don’t require outdoor access at all, just no cages in poultry barns. Organic eggs have some requirements for space per hen, dietary regulations and outdoor access, but organic does not mean raised on pasture.

True pasturing of animals requires their movement across pasture ground. Continuously grazing pasture, or having a static model where animals rotate through pastures around a fixed housing point – like a barn or chicken coop – isn’t efficient from a pasture management standpoint. It’s also difficult to actually get the flock out of the barn and onto fresh, nutritious pastures.

“APPPA’s definition of what pasture raised means is very simple,” Badger said. “Pasture raised poultry live the majority of their lives on fresh vegetative pastures and are housed in mobile shelters while on pasture. The mobile shelters ensure that the flock has continuous access to fresh forage via flock movement.”

According to Badger, the static housing model compromises the pasture. With a non-mobile housing option, there is typically “a dirt ring that works its way into a degraded pasture that transitions into untouched pastures. That’s the negative soil impact that this system has on the pasture that will eventually catch up with the health of the hens,” he said.

Simply putting animals outside on pasture is not the same thing as managing pasture. But pasture raised egg claims don’t have to adhere to any firm model of how those animals utilize the pasture, how long they live outside, how much of their nutrition they gain from pasture or how the flock itself impacts soil and plant health.

Handsome Brook Farms promotes the fact that their laying hens each have 108 square feet of personal pasture space, and are sheltered in barns or permanent structures when not outside. Vital Farms also relies on 108 square feet of outdoor space to differentiate their eggs and label them as pastured.

While that is much more room than a conventionally-raised bird will ever see in a poultry house, Badger stated that the overwhelming majority of APPPA’s independent pastured poultry farmers provide much more room per bird for their flocks to roam. For a flock of 1,000 hens, 2.5 acres is all that is needed for 108 square feet per bird.

APPPA’s video series is meant to educate consumers about the differences between poultry pastured in moveable shelters, where animals are foraging on pasture most of the time, versus the models used by most of the grocery store brands claiming their eggs are from pastured poultry.

“Ninety-nine percent of the ‘pasture raised’ eggs in the grocery store are raised in a barn, not a pasture” is the opening line to APPPA’s video on real egg production, denouncing the mere 108 square feet of pasture per hen and stating that this access to pasture does not make the eggs pasture raised (available at appa.org/real-eggs).

Badger argues that a stationary housing model limits the flock’s benefits to pasture as well as the benefits the flock receives from pasture. Mobility of the flock is a key component of pasturing poultry. Being on fresh pasture regularly means managing how the pasture is grazed to evenly distribute nutrients and promote pasture growth. For APPPA, pastured production requires mobile shelters – “a movement based model,” Badger emphasized.

“The fundamental problem is that it is much easier – and probably more profitable – to market pasture raised than it is to adhere to the precedents and principles of the pastured poultry model,” Badger said. “It’s from this perspective that APPPA has released our latest video, ‘Let Us Show You Real Pastured Eggs.’”

The APPPA video series on pastured poultry production – and the emphasis on real pastured eggs – was meant to convey what the organization believes is the misrepresentation of pastured poultry standards.

“I wish [they] would have called it something different because it is different from pasture raised,” Badger said of companies utilizing stationary housing models and 108 square feet of pasture per hen, promoting their eggs as pasture raised. “The slippery slope of movement from ‘fresh forage’ to ‘access to pasture’ was designed to get access to a market at scale.”

Badger feels there is an immediate need for independent pastured poultry farmers to reach out to consumers and educate them on what real pastured egg production looks like, and why it matters to the environment, the chicken and the egg. With higher levels of omega-3 fatty acids, less saturated fat and significantly more vitamins A and E than non-pastured counterparts, real pastured eggs are all they are cracked up to be.