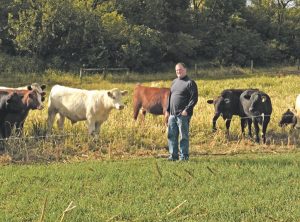 Ben and Sharon Peckman are experienced farmers, successfully operating their Franklin County, PA, dairy farm. Sharon manages the herd of 160 milking cows and 130 replacement heifers in a free-stall system. The Peckmans grow crops on about 1,000 acres for dairy rations and cash crops.

Over the years, the Peckmans have incorporated soil-saving measures, including cover crops, to improve infiltration and water holding capacity. With the help of grants and cost-share programs, Ben has installed pollinator plots, solar panels, manure storage facilities, a silage leachate collection system and a methane digester sized for their dairy herd.

The Peckmans’ conservation efforts on their Slate Ridge Farm have earned them a spot as finalists for the PA Leopold Conservation Award. This award is given in honor of conservationist Aldo Leopold, and recognizes farmers and forest landowners who show outstanding dedication to land, water and wildlife habitat resources in their care.

“Every decision I make revolves around soil health and conservation, from manure management to crops,” said Ben. “We’re in the Chesapeake Bay watershed, so I’m mindful of that. We’ve been no-till forever, and started growing cover crops about 20 years ago. The more we learn, the more we know about different cover crop species and mixes.”

Ben is currently working with Penn State agronomy researchers on a project studying the integration of cover crops with grazing systems. Since the Peckmans are already successfully raising their own Holstein steers in a feedlot setup, Ben purchased a group of beef steers to graze cover crops.

“We’re dairy farmers first,” said Ben. “We have to have good [dairy] replacements coming along. Our Holstein steer program is working well – we have a good ration, and we’re finishing them at around 14 months.”

The first group of steers finished last year, and this year’s group started grazing triticale and wheat in March. After Ben moved the group to graze another cover crop field, he encountered a challenge. “I ran out of cover crops to graze because I was planting cash crops,” he said. “I had them on an alfalfa/orchardgrass field for two months while waiting for the next cover crops to grow.”

The steers are confined with temporary electric fences, and although Ben said they’ve learned to respect it, having boundary fencing would be ideal. Because they don’t have permanent pasture for the beef animals, it’s sometimes challenging to keep good forage in front of them. “I’m always trying to plan a couple weeks in advance,” Ben said. “Where am I going to move them next week when they’re finished with this strip?”

He said the steers prefer young, tender vegetative plants, but it’s often difficult to have a section in that stage and ready for grazing. “I’ve found that there’s a two- or three-week window where they like to eat whatever cover crop is there, then during the last two or three weeks in that strip, the plants are more mature,” he said. “They’ll still eat it, but they don’t run to the next paddock.”

To expand their grazing program with additional steers, they’d need more sections to graze. A permanent pasture would be ideal for holding animals until the next grazing area is ready, but Ben doesn’t want to put up permanent fence.

“It takes a long time to grow something for them to eat, especially if it gets dry or cold,” said Ben. “But the beauty of what I’m doing is that I take the fence posts, wire and water hose along, and there’s nothing left that I have to farm around. I don’t want fences everywhere with water hydrants in the way. I like the fact that once I finish a strip and move on, I can farm that area again without any obstruction – that’s my goal.”

Adding grazing has changed Ben’s crop rotation, resulting in a more diverse system. “I grow a lot more small grains simply to provide a place to plant a summer cover crop that will be in place until the following spring,” he said. “I have rollers on my corn planter and plant everything ‘green,’ rolling the matted cover down. When I harvest a crop, I try to get back in and plant a cover crop as quickly as possible.”

He explained his experiment with 60-inch corn. “I shut off every other row on the corn planter,” he said. “At the same time I planted the corn, I drilled a cover crop. That gives me a cover growing in there all year, and as soon as I harvest, there’ll be a cover there. I’m also looking at something I can graze as well.”

Relay cropping is another experiment Ben hopes will yield good long-term results. “I’m growing wheat in rows instead of all the way across the field,” he said. “I put four rows of wheat, then block off four rows, so there’s 30 inches of wheat, 30 inches of nothing, 30 inches of wheat and so on. In early April, I planted soybeans in the blank rows, so the wheat and beans grew together until I harvested the wheat.” Ben added there are many ways to incorporate relay cropping, depending on planter, spacing of combine tires, cropping season and which crops are grown.

Like other aspects of farming, Ben finds that grazing cover crops comes with challenges. To ensure cattle have water, he moves hoses from one grazing area to the next, and found that the fittings on a long hose tend to catch on whatever is in the way. This year’s dry summer stunted the cover crop he planted at the end of July following wheat harvest. Although he welcomed heavy rain following the dry weather, Ben said cattle hooves resulted in temporary damage to one small grazing section.

“Intensive rotational grazing is different than just letting them go out and eat,” said Ben. “When you try something new and don’t have a history of doing it another way, it’s usually easier to start. To expand the grazing is going to require some change, but I’m not sure I want to change because what I’m doing now on a small scale is working well.”