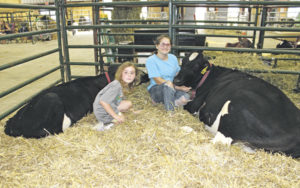 “It’s important for the kids,” Reed said. “They need the encouragement to get out there with their animals. It teaches them responsibility and how hard work can pay off. But we also like to get the farm out there so people can see the type of animals we can breed.”

The farm milks 450 cows and farms nearly 1,200 acres. Their breeding program’s goals are “to develop sound dairy animals with strength and that can produce good milk,” Reed said.

Reed did not grow up on a dairy farm but visited her grandparents’ nearby farm as a girl. She and her husband James operated a dairy and the family became involved in showing when their daughter Irene wanted to start showing for 4-H. Barb Young, their neighbor at Will-o-Crest Farms in Clifton Springs, and family friend Buddy Flemming, a cattle broker, helped Irene learn the secrets to effective showing. Years later, her daughter Paige followed in her footsteps to the showring.

“She’s thrilled that Paige wanted to get involved,” Reed said. “We make it a family affair.”

With a fall heifer calf, Paige won second place and Madelyn won second with her calf in the Little Britches competition. Madelyn shows her Grandpa Reed’s calf, Petunia, which she has claimed as “her calf,” Reed said with a laugh. The family planned to take both to the New York State Fair. Paige belongs to a 4-H group and is a member of the New York Holstein and the New York Brown Swiss associations.

As most farms do, Reedland Farms has changed and improved through the years as more research improves dairy operation practices. Cow comfort has become important, including proper ventilation.

“We have a new fan system,” Reed said. “It’s like wind tunnel. They suck the air through and that helps keep the animals cooler in the holding area and in the milking parlor.”

The cows live in a free-stall barn with fans throughout, including over the feed alley and above their new mattresses. Biweekly vet checks and weekly hoof trimming helps keep the animals healthy.

“You’ve got to take care of your animals; they’re your livelihood,” Reed said. “There is no way you can make it without caring for the animals.”

Held annually since 1856, the Wayne County Fair was canceled in 2020 like many events because of COVID-19. Amid continuing concerns over the virus, the fair board hosted an “Agstravaganza” this year on Aug. 7 – 8 and 12 – 14. The agriculture-focused event featured the fair’s top 4-H and ag competitions and a scaled-down version of other aspects of the fair.