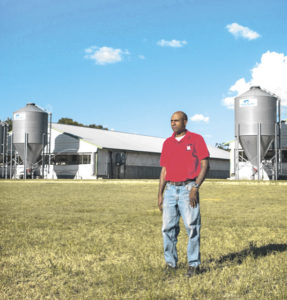 James Lamb is the kind of man who puts a wrench away exactly where it belongs when he’s finished using it. He’ll often go a step further and place it where it’s easy to pick up for the next task. “I like to be precise and think things out,” he said. “I try to plan, and if Plan A doesn’t work, I’ll have a smooth transition to Plan B.”

Having a plan and a place for everything is behind Lamb’s ambition to build a solid career. He was raised on a farm in Clinton, NC, and can hardly remember a time he wasn’t farming. His grandfather farmed, as did his father, and Lamb always had a role. “My father farmed in summer and supplemented his income off the farm in winter,” said Lamb, explaining his early years on the farm. “I was behind him everywhere he went – I got my love of farming from him.”

The Lamb family had livestock and cash crops including tobacco, corn and soybeans. They also grew cucumbers for processing and okra for direct sales to grocery stores. When Lamb was 16, his father was killed in an accident, which meant some decisions had to be made. Since growing produce and tobacco required more labor, Lamb discontinued those crops and concentrated on corn and soybeans. “I kept the cows, pigs, corn and beans because most of that work was machine labor,” said Lamb. “It would have been challenging at 16 to grow more labor-intensive crops like tobacco. Corn and beans were pretty much done in summer, and I helped my neighbor with his tobacco for extra income. I did that until I graduated high school.”

After high school, Lamb attended North Carolina State University with the intent of studying mechanical engineering. He knew he might make more money in mechanical engineering but would have to live in a more urban area. He realized that agricultural engineering better fit his goals. “NC State had a program called Agricultural and Environmental Technology,” he said. “I knew I might not make the same money, but it was something I could use back in my hometown.”

While in college, Lamb continued to farm corn and soybeans. He also served as a summer intern at Prestage Farms, a Clinton-based pork and poultry producer. “One thing that impressed me was that it a large enough company to be relevant in the industry, but they’re family owned and operated,” he said. “When I was in the summer intern program, I was able to work in almost every department from turkeys to swine.” Through his internship, Lamb decided he wanted to be a nursery grower.

After graduating from college, Lamb took a position at Prestage Farms, where he continues today as an environmental specialist. He explained his position as working primarily with manure management (or nutrient management) as well as ensuring cooperating farmers maintain sustainability. “Any way we can recycle a product or material for another use is good,” said Lamb. “That’s what we’re doing in nutrient management – recycling nutrients from pigs to recycle and reuse to grow a crop. And there’s new technology investigating economical ways to turn nutrients into methane.”

In his role with Prestage, Lamb handles environmental compliance and permitting for farms in southeastern North Carolina. “State regulations require manure irrigation systems to be calibrated every two years,” said Lamb, adding that calibration is important to detect leaks or identify aging equipment that would cause manure to be emitted at an incorrect rate.

In addition to his work with Prestage, Lamb maintains two nursery barns on the Lamb family farm, each of which houses 1,520 pigs. He receives weaned pigs at about 18 pounds, and after raising them to about 55 pounds, the pigs are finished at another farm.

Manure on Lamb’s farm is handled in a pit recharge system. Waste falls through slits and is drained weekly by gravity flow to an anaerobic lagoon. Solids break down through the anaerobic process, and water is recycled back under the pit for the next cycle.

He pumps the liquid annually from the lagoon and uses it on Bermudagrass hay. “I have a solid set sprinkler system to apply it to Bermudagrass hay from March through September,” he said. “The idea of the system is zero impact on the environment. Plants take up nutrients and they’re harvested and removed from the land. The goal is to not have any excess nutrients left on the soil – what you put on, you take out.”

Although Lamb’s system is fully automated and accessible through his phone, his mother Thelma, who just turned 90, helps on the farm during the day. She makes sure pigs have feed and water and that all electrical systems are working properly.

As an enthusiastic agvocate, Lamb has had numerous opportunities to talk with consumers who aren’t connected with agriculture. He recalled an event in New York City during which he conducted street interviews, introducing himself as a farmer from North Carolina and asking people their views on farming. Lamb is also an advocate for activities that help consumers learn about agriculture, including the NC Pork Council’s virtual reality exhibit at the North Carolina State Fair, where consumers can visit a hog farm virtually and see all aspects of production.

Lamb was named 2020 North Carolina Farmer of the Year. He serves in leadership roles on several ag-related organizations, including the NC Pork Council. He also volunteers his time to better the agriculture industry.

In talking with consumers, Lamb realized many people still have a romantic idea that farming should be the same as it was in 1950. “People are two to three generations removed from the farm today,” he said. “We don’t wear overalls and carry a pitchfork anymore, and we’re trying to do more with less.”