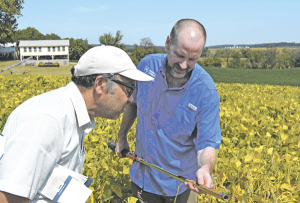 If a soybean crop isn’t performing as expected, or if yields have decreased over the years, the problem might be a plant parasite nematode (PPN). In many cases, the culprit is soybean cyst nematode (SCN). This pest was formerly a southern issue, but it’s been moving northward and impacting crops throughout the Mid-Atlantic.

“Plant parasite nematodes are below-ground pests that are not easy to see,” said Dr. Paul Esker, Penn State Department of Plant Pathology. “It challenges us as to how to handle them – is there a problem, what do we do, how do we take a sample? Accurate diagnosis is key to management of nematodes. What you don’t know may impact you because you aren’t able to see it clearly.”

Esker explained that nematodes are a diverse group of thread-like roundworms, adding are beneficial. “They’re an indicator of good soil health, and are also known to feed on bacteria, fungi, protozoans and other nematodes as well as animals,” he said. “We’ll see positives before negatives.”

However, the negatives can have significant impacts on crop health and yield. Feeding strategies of PPNs differ by nematode type: ectoparasites feed on the outside root issue, and endoparasites enter the root. “Sometimes they’re semi, meaning part is inside and part is outside,” said Esker. “They’re establishing habitat in the root and sucking everything the root offers.”

SCN is a significant pathogen due to its a broad host range, the ease of spread, impact on nodulation and its ability to increase the severity of other soybean diseases such as sudden death syndrome (SDS) and brown stem rot. “It can persist in the soil for a very long time,” said Esker. “It has a high reproduction rate, high genetic intermixing and variability, and most importantly, the primary source of resistance in most commercial varieties (PI 88788) has shown to be overcome by SCN.”

The most predominant symptom of SCN can be no symptoms. Below-ground soil sampling is useful, but must be done correctly for accurate results. Above-ground scouting is a challenge because symptoms can mimic other issues such as water and nutrient deficiencies.

“In most of the soybean-producing areas of the U.S., SCN is problematic,” said Esker. SCN has been moving northward from southern states, where losses have been significant. While a 5% yield loss may not seem significant, the scenario becomes more serious when that figure is applied to bushels per acre.

Penn State Extension educator Dr. Adriana Murillo-Williams explained the lifecycle of SCN and why the cycle makes it difficult to manage. After eggs hatch, they transform into several juvenile states and seek roots to feed on. “They enter and feed on the vascular system,” she said. “Males leave the root and revert to their normal worm shape, while females stay attached to the root and keep feeding. They get so large that at some point they protrude out of the root, and this is when mating occurs.”

After fertilization, the female carries up to 300 eggs. Later in the cycle, the female dies and the body detaches from the root. The detached body becomes a cyst – a dead female full of eggs. The cysts can remain in the soil for a long time, even in the absence of a host. “In optimum conditions, this cycle can be completed in 24 days,” said Murillo-Williams. Depending on farm location, there’s potential for three to six generations during a growing season. “It’s critical to proactively manage SCN to prevent populations from getting out of control.”

Murillo-Williams said a soybean field with a high SCN population can experience a 10% yield loss before symptoms are obvious. In cases where symptoms are observed (ranging from yellow to stunted plants to death), yield loss may be up to 50%. The level of disease depends on three factors working together: a susceptible host, presence of pathogen and an environment that favors the pathogen.

SCN thrives in hot, dry conditions. Hosts include various species of garden beans, peas, birdsfoot trefoil, clover, chickweed, purslane, ground cherry, mullein, purple dead nettle, henbit and pokeweed. These species must be managed to decrease populations of SCN. Non-host species include corn, barley, oats, sunflower, alfalfa, mustard, rapeseed and hairy vetch – any of which can be used in rotation to lower the incidence of SCN in soybeans.

Scouting below the ground for SCN involves digging roots or taking soil samples. Murillo-Williams said plants should not be pulled because cysts can easily detach from roots. “You can only look for females during a small window in the growing season,” she said. “The fact that you don’t find them doesn’t mean they aren’t there. The other approach is collecting soil samples. This can be done any time during the year.”

Murillo-Williams recommended using a soil probe to collect soil samples. Collect 15 to 20 one-inch diameter soil core samples at six to eight inches deep per 20 acres. More samples means a higher likelihood that SCN will be found. Take samples in a zig-zag pattern, or from management zones such as grassed waterways or hillsides.

If the farm includes several soil types, sample each of those areas. Samples can also be collected from high risk areas for SCN such as field entryways, previously flooded areas and areas of historically low yields. Place all samples in a bucket, mix and place in a bag. Be sure to collect at least 500 grams of soil. Keep the sample away from heat and direct sunlight and send to the lab promptly. If necessary, samples can be refrigerated for several days prior to mailing.

Murillo-Williams said the ideal time to sample is autumn because SCN populations have reached the highest levels. “You can also do fall sampling of non-host plants in advance of next year’s soybean crop,” she said. “If you do that, take soil core samples in the root zone and when soil is not saturated.”