CORTLAND, NY — In a time when New York agriculture faces many challenges and unique opportunities, bringing a team approach and putting many heads together seems like a great idea. For the rural rich 22nd congressional district that spans from Oswego to Tioga County, farmers have a significant stake in the decision-making at the federal level.

Newly elected U.S. Congressman Anthony Brindisi understands the fact that over 50 percent of his district is in agricultural production and needs to be on the cusp of issues facing farmers. To this end, he and his staff assembled at the Grange Building in Cortland, NY and held their first Agriculture Advisory Committee meeting. Over 60 agricultural stakeholders participated in the robust 2-hour roundtable. “There are a lot of people down in Washington, D.C. claiming to represent agriculture. I’m a bit reserved in considering their opinions. I’m looking for the reality in farming and want to take guidance from this committee of land stewards in my home district,” said Brindisi.

In January, Brindisi was appointed to the U.S. House Committee on Agriculture where he serves on the Subcommittee on Livestock and Foreign Agriculture, and the Subcommittee on Biotechnology, Horticulture, and Research. This gives him keen insight that he can share with this newly formed group of stakeholders. It also gives him support when he needs counsel on an issue affecting local agriculture. The experienced group of dairy, livestock, equine and crop farmers along with agri-business stakeholders, food processors, educators, conservation professionals and NY Farm Bureau welcomed the chance to meet on a regular basis or over e-mail to tackle issues by sector or as a group as needed by the Congressman. 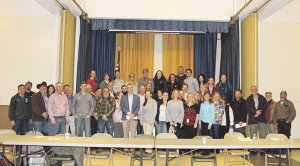 Brindisi discussed the hot button issues facing him now, which included: Oversight and implementation of the new farm bill, deciding whether to support the new United States-Mexico-Canada Agreement (USMCA), immigration reform and the H-2A program, how to support dairy and crop farms in the face of the current trade policies and debilitating tariffs and climate change initiatives. “We need to formulate sound agricultural policies and get away from a one size fits all mentality for agriculture that respect the hard working rural folks that feed this nation,” said Brindisi.

Issues in the 22nd congressional district brought up by farmers included labor costs and the looming state showdown over unionizing farm workers, dairy support initiatives and strategies, investing in young farmers and agriculture education, school lunch programs, the 45 million dollar shortfall in funding for New York’s portion of EPA’s mandated Chesapeake Bay TMDL pollution diet and economic opportunities and the regulations that impede them. “Low prices and labor issues are the common denominator on most farms,” said Zaid Kurdieh from Norwich Meadows Farm.

The new committee appreciated the chance to participate in decision-making and vowed to support the Congressman’s need for a field perspective and also learn from each other’s agricultural endeavors and perspectives. The future of agriculture looks a bit brighter for the 22nd district.