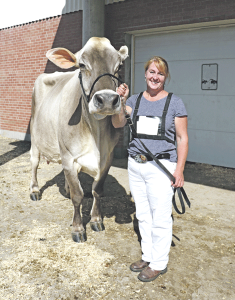 “In order to qualify for that class a cow needs to have produced more than 8,500 pounds of fat and protein in their lifetime. In addition to being a great milk cow, 10-year-old Fern has a decorated history in the show ring at the Big E. She was Grand Champion in 2014 and 2015 and first in her classes again in 2017 and 2019. She is classified 95, which is a remarkable score that only a very small handful of Brown Swiss have ever attained, and has had seven natural births,” said her handler, Laurie Cuevas of Sunderland, MA.

“She is a very special cow and it’s an honor to work with her,” said Cuevas at the Big E in West Springfield, MA. “I love working with great cows and great people and I come back every year to this fair to show my cows and help my friends show their cows.”

In addition to Fern, Kelly and Tammy Croteau of Kelly-View Farm exhibited 14 Brown Swiss at the Big E and had a very successful first day. They were awarded both the Premier Breeder and Premier Exhibitor banners for the 2019 Northeast National Brown Swiss Show.

They also won first and second in the Dam/Daughter class in an unusual way, with three generations represented with their Brown Swiss cows Kelly-View Prelude Misty, Kelly-View B Marshmellow and Kelly-View MS Moca – grandmother, dam and daughter, respectively – proving years of quality breeding within the same cow family on the same farm.