Coming together to create some cheese 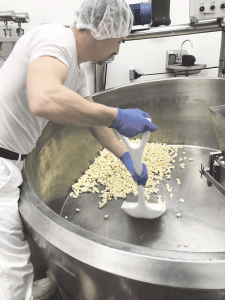 A confederation of cultivating clans has created a lucrative creamery. The joint venture of three family farms in western New York, Eden Valley Creamery has been operating in South Dayton for nearly a year since first opening in July 2019.

“The Mammoser, O’Gorman and Franklin families are all well-established organic farmers in the region who came together to found Eden Valley,” said Rachel Czarnecki. Czarnecki, who studied business at SUNY Fredonia, came aboard as Eden Valley’s head of marketing and sales not long after its grand opening. “The three farming operations were looking to market aged cheese and cheese curds.”

Josh Meabon is Eden Valley’s head cheesemaker. He has over 25 years of experience in dairy production and has been with Eden Valley from its start. “Things have been going very well,” Meabon said. “Our current offerings have been selling, people really like what we’ve got and we’re looking to expand in the near future.”

Eden Valley operates out of a 500-square-foot facility, using milk provided by nearby Eden Valley Organic Farm’s herd of 500 Holstein and Jersey cows. It produces cheese curds in original, garlic, sour cream and onion, horseradish and Buffalo flavors. Their line of aged cheeses includes the whimsically named Buffalo Roads Swiss, Good Neighbor’s Gouda, Homegrown Havarti and the Farmer in the Dill. Meabon said the cheeses pair well with beer or wine, are a light snack or can even be used in gourmet recipes.

According to Czarnecki, “The best-selling cheese curd is the garlic, and the gouda is the most popular aged cheese.” She pointed out that the Swiss is a very close second.

Eden Valley sells its products as both a wholesaler and retailer. The cheeses are carried in both Thorpe’s Organic Farmstore and the Lexington Coop Markets. Meabon said there is also a retail store on site, which has enjoyed a lot of foot traffic. “Customers really like that they can watch the cheese being made by hand through the large window looking into our production area,” he said. Meabon estimated that the breakdown of Eden Valley’s sales are 60% wholesale and 40% retail.

Eden Valley also participates in a number of farmers markets throughout the region, including Buffalo, East Aurora, Hamburg and Williamsville. Czarnecki said, “We’ll do most of our farmers market sales from May through October.”

While any business can unexpectedly find itself busy in its first year, Eden Valley has recently seen an extra unplanned uptick in requests for its cheeses. Czarnecki offered an explanation: “Because of the COVID-19 shutdown, we’ve had calls from a lot of people who said they would normally be going out to restaurants but are now staying at home. They’re looking for different options, trying new recipes and our cheeses are often some of the ingredients they’re looking for.”

Although it’s not yet reached its first anniversary, the Eden Valley team is already working on expanding. Czarnecki is excited about the new projects coming down the line. “We got another flavor of cheese curd that should be coming out in a few months. Our aged cheddar will be ready to go by the fall. We’re also working on adding mozzarella to our list,” she said. In addition to their cheeses, Eden Valley will be introducing a selection of butter products in 2021.

The creamery will have an online sales option available soon. For more information, visit www.edenvalleycreamery.com.