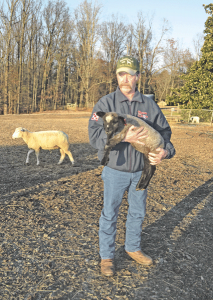 John Brasfield has been retired for 11 years, but like most who have livestock, he hasn’t stopped working. After serving as a livestock Extension agent and county Extension director, Brasfield started expanding his flock.

“I did my research in sheep nutrition,” said Brasfield, who attended Virginia Tech and earned a degree in animal science, followed by graduate school at North Carolina State University. “When I took a job as a county agent here, I wanted to have cows, but sheep don’t take as much facilities or equipment. The family can handle them.”

When he first had sheep, Brasfield had an arrangement that allowed him to keep sheep at another farm. But he wanted to increase his flock and raise sheep his way, so he looked for his own farm.

When Brasfield purchased the 10-acre property in King, NC, he used a survey map to determine how to make the most efficient use of space. Grazing was ample feed for Brasfield’s flock for a while, but that changed when he started to focus on club lambs. “For about six years, I didn’t have to feed any hay,” he said. “But when I got serious about the club lambs, I had about four to six different breeding groups, and that used up all the grazing.” Today, with a flock of about 100 sheep, Brasfield is in the process of refining his management-intensive rotational grazing system (MIG).

A laneway, which is primarily bermudagrass, serves as a path for moving sheep easily from paddock to paddock. Brasfield said bermudagrass is good for grazing when it’s young, but sheep won’t graze it when it becomes older.

“I originally built the laneway because the only water source is a creek and the neighbor let me put a fence back to it,” said Brasfield. “I didn’t have a water source so I ran a pipe on the ground.” The laneway is wide, which might seem wasteful given the limited pasture acreage, but Brasfield planned it that way in case he needs to move equipment in. With temporary fencing, Brasfield can create smaller grazing lots as needed.

Brasfield said because the sheep are grazing on small acreage, manure and urine have eliminated the need for fertilizer. “When I first bought the place, there was a lot of broomstraw,” he said. “Usually that means low pH soils, but the pH was high – around 6.5. At first, I was just going to put lime on the entire place, but I took soil samples. While the pH level was good, the phosphorus level was almost zero. I used Christmas tree fertilizer (18-46-0) and built up the phosphorus.” Brasfield added that excess manure and urine on small paddocks eventually causes a drop in pH, so he added lime to correct that problem.

A good charger is critical in keeping sheep in a paddock that’s divided by just a few wires, so Brasfield uses one with an output of 800,000 volts. After an attack by domestic dogs early in his sheep venture, Brasfield now uses livestock guardian dogs to deter predators.

Although club lambs can be comprised of nearly any breed, the most desirable lamb for the majority of shows is a Hampshire x Suffolk. “That’s what the trend is,” said Brasfield. “They’re thicker and meatier. It takes a tremendous Dorset to compete with a blackface, but they can do it.”

Brasfield’s flock lambs twice a year. To aid in inducing heat cycles in blackface ewes that don’t typically cycle out of season, he uses CIDRs (controlled internal drug release), and will use CIDRs on whiteface ewes to manage the lambing season. “It makes them cycle, then they breed the first cycle,” he said. “In spring, they might cycle once or twice, then they’re bred.”

On average, Brasfield keeps rams for about three to four years before replacing them. The registered Dorset ewes and rams he keeps meet the demand for purebred Dorset rams. Brasfield currently has four rams for club lamb production, each of which is used to breed different groups of ewes. He recently removed the rams from breeding groups, so for now the rams are together in a pen that’s large enough to accommodate them but small enough that they can’t injure one another. As the rams settle down, he’ll increase their space. Although Brasfield would like to retain some of his best ewe lambs for replacements, there’s such a demand for them that he can’t justify keeping them.

Ewes are vaccinated with CD&T (to prevent clostridial disease and tetanus) about four to six weeks prior to lambing. Ewes lamb outside, then are brought inside for observation. “If they have twins, I leave them in for two days, and if they’re doing well, I turn them back outside,” said Brasfield. “Singles stay in one day, two at most, unless there’s nasty weather. Triplets stay in longer.” The only ewes that lamb inside are first-time ewes when the weather is cold and wet.

Lambs are introduced to creep at just a few days of age. Brasfield manages the feed intake of early lambs, and pushes later-born lambs to attain a desirable size. At weaning, lambs receive a CD&T booster.

Brasfield is currently preparing to put up a new building which will store fencing supplies and hay, freeing up additional space in his existing barn for ewes and lambs when needed. “Last year, January was so bad that I had pens in every part of the barn so I could keep sheep inside,” he said.

Customers are already calling Brasfield for lambs, and will soon start visiting the farm to select and purchase them. Most buyers are within a two to three hour drive, primarily from Virginia and North Carolina. “They can’t find fall lambs for the April/May shows,” he said, adding that those shows are terminal. “Lambs are about 50 to 90 pounds when I sell them, then they finish them.” Brasfield offers tips on finishing lambs for the show ring to purchasers.

In addition to raising club lambs, Brasfield also judges market lamb shows. With the potential for conflict of interest, he’s careful to not accept judging invitations when he knows his own lambs will be in that show.