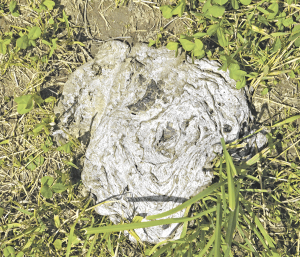 At one point in Cliff Hawbaker’s dairy career, his goal was top production – squeezing every bit of milk from his cows. In 1998, a fellow dairyman who had switched to grazing convinced Hawbaker to give grazing a try.

Today, Hawbaker is an advocate for grazing, although he’s quick to point out that each farm has to do what’s best for that operation. The Hawbaker family’s 243-acre farm in south-central Pennsylvania is perimeter fenced with 50 designated paddocks for rotation. The farm’s rolling hills support a variety of forage species, and Hawbaker has become familiar with what grows best and where.

Although the 130-head herd was once black and white, Hawbaker has done some careful crossbreeding that results in an animal that works best in his system. “We started with Holsteins,” he said. “We went to Jerseys and pulled in some Finnish Ayrshires, and now we’re using a Guernsey bull. We’re looking toward dual-purpose animals – if the milk price is going to be down, I want an animal I can use as beef.” Hawbaker uses a bull for breeding, aiming for calves in fall and spring.

Calves are born starting in March, and are left with fresh cows for three days to assure ample colostrum intake. Hawbaker has found this practice results in more thorough post-calving cleaning as well as more successful breed back and faster settling. On day four, calves are moved to a pasture and receive milk from a group feeder for four to five months. While establishing calves on pasture is the goal, they’re also supplemented with alfalfa/grass hay. Hawbaker raises and retains the first 30 heifer calves born each spring.

In managing his pastures, Hawbaker uses a combination of grazing, pruning and clipping. “I look at it as a sustainable and regenerative agriculture, which can take on different forms,” he said, explaining his grazing philosophy. “I focus on wealth – the wealth of soil, resources from land to water and wildlife – it’s a whole system. There’s no right or wrong way. Graziers can make mistakes and recover from those mistakes.”

Although pasture growth remains lush with ample rainfall, shale ridges turn brown during dry spells. Hawbaker said the predominant species, including orchardgrass, fescue and bluegrass, do best in a variety of conditions including wet, dry, cold and heat. He focuses on growing C3 grasses, which are cool-season perennials, rather than C4 grasses, also known as summer annuals or warm season species.

“Everyone has their own version of pruning,” said Hawbaker, adding that he started pruning on May 1 this year, the earliest ever. “My idea of pruning is to a desired end. There’s a time to do it – what do I want in the future? Pruning is for now, and clipping is after the fact, for aesthetics or for undesirable growth.”

There’s a reason Hawbaker prunes prior to cows entering a paddock. “I don’t want to spread manure everywhere,” he said. “When a cow pie is dropped, I don’t want it spread because that’s when the bugs can get it. With the right soil life, within ten days, there shouldn’t be any cow patties because they disappear – that’s the life we’re trying to keep going.” 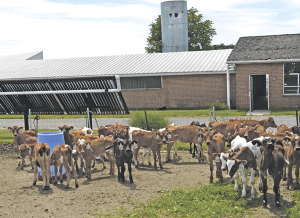 While dairy farmers tend to think about filling cows’ bellies and making milk, Hawbaker said they should be as concerned about life in the soil below as they are about what’s above ground. As he inspects pastures where cows are grazing, Hawbaker takes note of cow pies, and knows what he wants them to look like. “Consistency tells me the cow has enough fiber, protein and energy,” he said. “I want to see a little pile with a dimple in it.”

Hawbaker explained what happens following proper pruning: “When the cows come in the next time, it’s like a brand-new April,” he said. “They’ll eat all the forbs and everything else here. All I’m doing is creating another April at the end of May and into June when grass is still in a growth stage. The grasses are growing and I want to keep it vegetative.” Although Hawbaker keeps a fairly strict schedule denoting where cows will be at any given time, he’s flexible enough to make changes according to how the season progresses.

Grazing involves moving cows at the right time, and Hawbaker said not all graziers have the discipline to do that. In some cases, Hawbaker’s pruning is more like clipping because he’s essentially mowing hay and turning cows into the field to eat it rather than baling it. Sometimes Hawbaker has to decide whether to make hay or use that paddock for grazing, but it doesn’t take long to make a decision because he thinks about the end goal.

Hawbaker said it’s easier for him to manage his actions to get an outcome than to purchase something to change the outcome. He explained this thinking by using clover as an example. “I can spend money on clover seed but can’t seed it until summer, fall or next spring,” he said. “The benefits are lost by then. Just change management style and you’ll get what you want. I’ve actually done better not spending money than by spending it.”

As he discussed the management of a group of cows on a slate ridge, Hawbaker said he’d like to regenerate the area through continuous grazing, then rest it and see what happens. He hasn’t seeded any pastures since 2009, but may seed in August if necessary. “Another way to seed is to make hay, then roll out bales in the middle of June,” he said. “It’s cheap seed.”

While Hawbaker’s operation is organic, he cautions conventional dairy producers about making the switch unless they have a viable plan. “Be careful you aren’t lured into the extra dollars for organic price to make you rich,” he said. “I’m thankful for that market, but in reality, the money is in the grass.”

Although his well-kept pastures and healthy, productive animals make it look easy, Hawbaker said grazing is not for the faint of heart. “It has to come from within,” he said. “No two graziers handle it the same way, and no one’s way is right or wrong.”