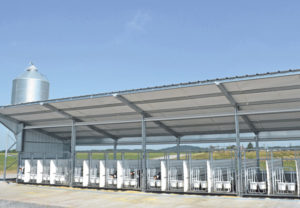 An outbreak of coccidiosis among young dairy animals can be costly, time-consuming and potentially deadly. The protozoa that cause coccidiosis are highly prevalent in the environment, but dairy producers can manage calves and their environment to prevent this disease.

Dr. Matt Atkins, dairy management specialist, University of Wisconsin, explained that coccidiosis is caused by the protozoa Eimeria, which invades the cells of the intestinal lining. Both cells and the lining are destroyed, resulting in nutrient absorption issues.

Coccidia are species-specific, and cattle are most often affected by E. bovis and E. zuernii. Calves pick up Eimeria oocyts (eggs) from a variety of sources, including feed and water, and can pass eggs to other calves through grooming. Eimeria are found in all management systems, including pasture-based and confinement.

Young animals between one month to one year of age are most likely to become infected following stress events such as dehorning, castration or movement. Low-level exposure to Eimeria helps animals develop immunity over time, but high-level exposure results in clinical disease.

Incubation time is about 15 to 20 days. Oocysts are released in manure, then remain in the environment for several days to over a year, depending on environmental conditions. One of the challenges in catching coccidiosis early is that clinical signs aren’t immediately obvious – it takes about 15 to 20 days between the time the animal ingests oocysts until the organism becomes established in the intestines.

Atkins said symptoms of clinical disease vary, and often begin with loss of condition, loss of appetite, weight loss, watery diarrhea and straining to defecate. Only about 5% of infected calves will exhibit clinical signs; other cases will be subclinical with no clear signs. However, subclinical disease can damage the small intestine, resulting in decreased feed intake and growth. In severe cases, damage to the large intestine results in visibly bloody feces, which leads to rapid decline and death due to dehydration.

Because several other digestive disorders can mimic coccidiosis, Atkins recommends that producers work with their herd veterinarian to confirm the disease. “If you aren’t feeding a coccidiostat, begin that to slow down the load as treatment protocol is being developed,” said Atkins. “Coccidiostats work by delaying oocyst shedding and reducing the number of clinical treatments, which allows the animal to build immunity over time.”

The most widely used treatment for coccidiosis is amprolium, administered via oral drench to individual animals. Remove sick animals from a group and allow them to recover. Isolating animals also helps reduce the spread and allows dairy staff to determine how much calves are eating and drinking. One case of coccidiosis likely means more calves are infected, so monitor all calves closely and be prepared to treat as necessary. If a high percentage of calves in a group are infected, it’s usually worth treating all animals in the group.

Sanitation measures such as “all in, all out” grouping for younger animals can help halt coccidiosis. Atkins said very few disinfectants will impact Eimeria, but ammonium hydroxide destroys the oocysts. Check product label and use disinfectants per label instructions. Managing coccidiosis with essential oils, botanicals and plant extracts may have some value, but more research is needed to determine which treatments work consistently.

“Pre-weaned calves spend more than half of their time lying down,” said McCarville. “Neonatal calves spend more than three-quarters of their time lying down. Regardless of the season, bedding is important to create a comfortable, cushioned surface for lying.” Bedding should be clean, dry and not dusty. Bedding options include straw, wood shavings or sawdust, almond hulls or a combination of products.

“Clean bedding can reduce the chance of pathogens entering the not-yet-healed navels of neonatal calves,” said McCarville. “To prevent the navel from touching the bare ground, bedding should be laid before the calf is placed in the pen or hutch.” Bedding to a depth of 12 inches requires about 20 to 25 pounds of bedding per calf, with two to three pounds added each day.

Bedding provides a barrier between the calf and fluids such as milk and spilled water. Moist environments harbor pathogens, so good drainage under the hutch or pen and away from the area is critical.

“Poor ventilation can cause a buildup of compounds that may impair a calf’s immune response, cause respiratory problems, make the calf prone to pathogens and reduce feed intake and rate of feed conversion,” McCarville said. “An anemometer measures air speed and is a great way to make sure you’re hitting the target [air exchange] rate at different temperatures.”

The ideal individual calf pen promotes biosecurity while allowing sufficient air movement within the pen. A suitable pen provides 32 square feet of resting space with enough bedding to wick away moisture and provides cushion to minimize physical trauma. Young calves spend over 50% of their time during the day and 100% of their time at night lying down, so pens should be sized to allow calves to lie down comfortably.

Solid panels between calves help minimize respiratory disease by blocking drafts and preventing disease transfer from one calf to another. Pen walls should be four feet tall to minimize drafts and limit nose-to-nose contact. Side panels should extend at least 12 inches past the front of the pen to minimize nose-to-nose contact when calves’ heads are out during eating or drinking.

The pen front and rear should be open for good ventilation. Pens with solid panels on three or more sides don’t allow fresh air into the pen, increasing the risk of respiratory disease. The rear of the pen should include an 18-inch solid panel at the base to maintain bedding, and the front of the pen should have space for two buckets: one for feed and one for water and/or milk. McCarville said this arrangement helps minimize the amount of feed and water a calf dribbles from one pail to the other while eating or drinking, which helps reduce contamination of feed and water.